11 things that put the number of people who've voted for Trump in perspective. 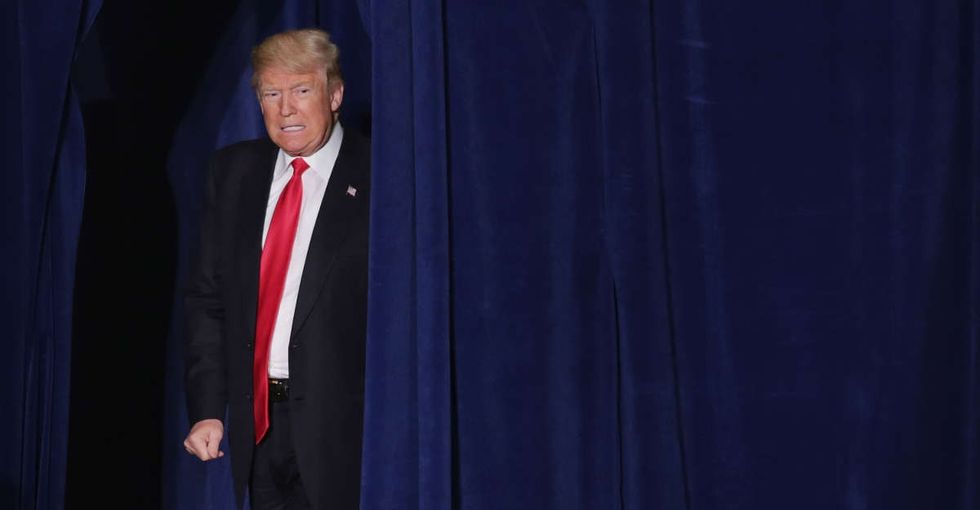 Donald Trump's resounding victory in Indiana last night — and Ted Cruz and John Kasich's departures from the race — means that, barring a last-minute catastrophe, he's all but wrapped up the Republican nomination for president.

While it's more than a little discouraging to think that Trump, a man who's made so many bigoted comments about Mexicans, Muslims, women, black people, and Jews (and that's not even a full list of groups he's offended) is still so beloved by so many people, the truth is that though the 11 million total votes cast in Trump's favor this far have been good enough to best his rivals and let him walk away with a commanding victory in the Republican primary, it doesn't actually make him all that popular in the grand scheme of things.

11 million votes might sound like a lot, but there are 318 million Americans, meaning that, currently, only 3.5% of the population has cast a ballot for Trump. That's peanuts. Even if we grant that a lot of those are children and others who can't vote, that's still peanuts. Not even peanuts. It's just peas. Or just nuts.

To put that 11 million number in perspective, here's a look at how many more millions of Americans do noble, inspiring, or just generally kind of cool things each year than have voted for Trump's brand of hater-ade this year.

62.6 million Americans volunteered in 2013. That's 51.6 million more people than have voted for Trump so far.

Statistically speaking, at this point, you're about five times more likely to find Americans who recently made brownies for a church bake sale or escorted a 90-year-old nursing home resident to the bathroom than you are to encounter Americans who bought hard enough into Trump's BS about Mexicans being rapists and Muslims being terrifying death-splosion monsters to cast a vote for him.

Unless of course, you're on the internet, in which case, they'll find you.

2. Going to a baseball game to watch a last-place team play (which people did 14.1 million times)

Attendance at the stadiums of the six worst MLB teams in their division last year totaled 14.1 million. That means 3.1 million people thought it was a better use of their time and money to watch the completely hopeless Boston Red Sox, Oakland Athletics, Cincinnati Reds, Philadelphia Phillies, Detroit Tigers, and Colorado Rockies flail helplessly at a series of 90-mile-per-hour fastballs for three-plus hours than to cast a vote for Donald Trump.

Sure, some of them probably went to games more than once, but these attendance figures don't count the millions of fans who, even more bafflingly, went to watch those teams lose on the road. When you factor that in, it's clear that more Americans spent the summer of 2015 clinging to an inspiringly cockeyed and delusional but ultimately charming hope that it still just might be Joey Votto's year than who voted for the host of "Celebrity Apprentice" to become the Republican nominee for president of the United States.

Among the 55 million Americans who identify as Latino, Trump currently boasts an impressive 77% unfavorable rating.

That means there are almost four times more Latino-Americans who hate Trump's guts (42 million) then there are total people who have voted for him so far.

Wind turbines provide power to an estimated 18 million American homes. Given that the average American household contains 2.5 people, that's about 45 million people helping save planet Earth by doing nothing more than living high off that sweet breezy crude — 34 million more people than have pulled the lever (or filled in the dot or dimpled the chad) for the former CEO of Trump Steaks.

Americans not only gave $358 billion in 2014, but a Gallup poll taken the previous year found that 83% made some sort of charitable donation, which works out to about 265 million people.

That's not only a staggering amount of humans; it's real money! Definitely more real than the donations Donald Trump promised to make to veterans organizations and then only sort of did.

Even if you extrapolate out Trump's percentage of the Republican primary vote (40%) to half or all of the electorate, Planned Parenthood still comes out ahead.

Not getting ovarian cancer and being able to choose when or if you're ready to start a family: still more popular than giving the doofus behind Trump Airlines the nuclear codes.

That's like if 11 million people each voted for 28 Donald Trumps...

...perhaps the most terrifying "28 of something" that it is possible to have — narrowly edging out bees, undetonated land mines, and phone calls from your mom where she didn't leave a voicemail.

As of May 4, 2016, the official video for "Disney's 'Frozen' 'Let it Go' Sequence Performed by Idina Menzel" had been watched an ungodly 526 million times! If there was a way to put it to a vote, a 3-year-old theater-pop anthem of self-empowerment from a children's movie would pile-drive Donald Trump into the mat in the biggest landslide in history.

(Is it too late for the Democrats to nominate "Disney's 'Frozen 'Let It Go' Sequence Performed by Idina Menzel?" Asking for a friend).

The bad news? A mere 5% of all Americans use mass transit to get to work. The good news? That works out to 16 million people, which is five million more than have voted for a trust-fund baby who bankrupted his gross casinos.

10. Calling to tell their moms how much they love her (??? million people)

Admittedly, I've got no statistics on this, but I think it's a safe bet to assume more than 11 million Americans do this each year.

I hope more than 11 million Americans do this each year.

You're the best, Mom. Photo via iStock.

11 million people in the Republican primary voted for Donald Trump.

Meanwhile, the ranks of Republicans who not only didn't vote for Trump's brand of callous bigotry, but say they still won't vote for Trump include an editor of a prominent conservative blog...

...and the managing editor of the Washington Examiner, a conservative publication.

Meanwhile, 12 million Democratic primary voters have voted for the Democratic front-runner Hillary Clinton and 9 million have voted for Bernie Sanders. Math says that's a total of 21 million people — 10 million more than have voted for Trump thus far. If you combine the Republican and Democratic not-Trump votes, you get almost 45 million.

Trump will almost certainly get more than 11 million votes in a general election, especially now that the other 17 Republican candidates have dropped out of the race. But while Trump might seem unstoppable now, only 3.5% of Americans have actually cast a vote for him thus far.

Far more Americans are standing up to Trump's brand of bigotry, mysogyny, xenophobia, and general cluelessness than are casting a ballot for it.

And that's just as important a story.

From now until November, let's make sure we keep it that way, so that Trump can go back to doing what he does best: