Dinner is much more than just what you eat. 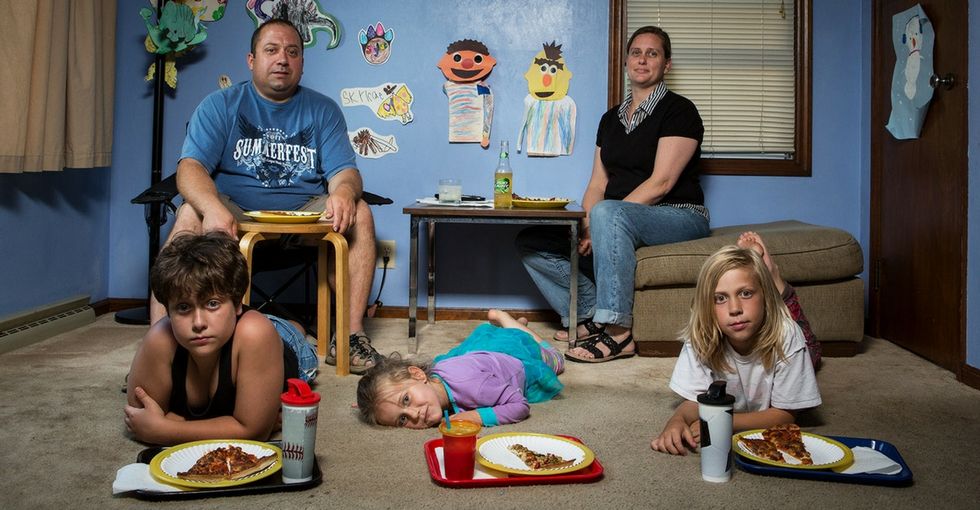 In times when the world seems divided on just about everything, it's helpful to look at what we have in common — even something obvious.

That's what photographer Lois Bielefeld was aiming for with "Weeknight Dinners," a conceptual portrait series centered around typical evening meals, which she shot between 2013 and 2015. For Bielefeld, it was a way to document a near-universal experience that everyone can relate to. It's a display of common ground in one of its most basic senses.

The concept for the series emerged from Bielefeld's own interest in the social power of food.

Growing up, Bielefeld's chores included making a weekend meal, which was a family bonding event in and of itself. "I was less into the actual food until I got older and started regularly cooking and finding my own tastes," she says. "But even at a young age, I recognized food brings people together and is a way to explore different cultures."

For her, "Weeknight Dinners" is an extension of her own family's ritual, an exploration in other people's dinner habits.

Bielefeld chose to focus the series on weeknights for an important reason.

During the week, our rituals are shaped by the world around us. Work, school, and home — how we prepare for a meal between Monday and Thursday tends to differ from how we might dine on the weekends. For some, weeknight cooking might mean a plate of leftovers; for others, perhaps a microwave meal or carry-out. No matter what it is, no matter where you eat it, and no matter who you're with, it's simply a common part of most of our lives.

The project also provides insight into how people actually are, as opposed to how they would like to be seen.

"My process is straightforward. I asked my subjects to prepare whatever they normally would for a weeknight dinner — nothing out of the ordinary," Bielefeld explains. "But I can’t control how people want to present themselves and occasionally I’d show up and there would be this elaborate meal with a Cornish game hen and fancy bowls with raspberries in it! But this to me is just as interesting and part of the series — how people want to be seen as opposed to their normal habits."

As much as the project is about taking a look into the lives of others, Bielefeld hopes it inspires viewers to take a moment to consider their own place in the world.

The series is meant to be consumed as a series of large-scale prints where viewers can take time with each image and pore over the details in each room, gesture, meal, and subject. It's meant to inspire introspection.

"There is a strong sense of voyeurism and a subsequent self-identification that happens when looking at the photographs," she says. "I want people to see all of the similarities and differences that encompass our culture and hopefully be enriched by this. I also hope that they think about their own meal times and what is important to them."