15 photos that prove Earth is far stranger than any science fiction.

Did you know that when scientists wanted to test the Mars rover, they went to Chile? It turns out there are a lot of places on Earth that are totally out of this world. 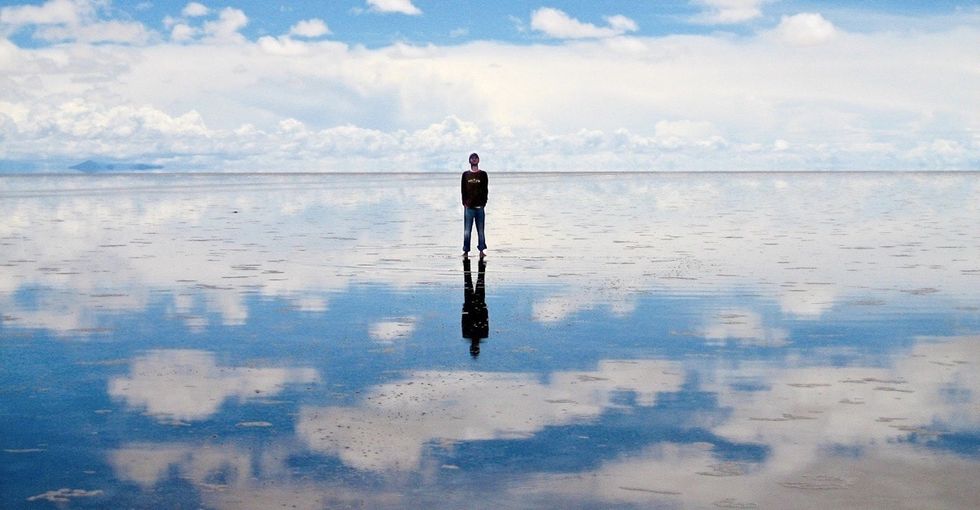 1. The Atacama Desert in South America is so dry, NASA has used it to test Mars rovers.

It even has a reddish surface. Image from ESO/Wikimedia Commons.

2. The Red Beach of Panjin in China looks like it's covered in the red weed that gave Mars its red color in H.G. Wells' "War of the Worlds."

3. Jakku? Tatooine? Nope, this isn't a planet from "Star Wars." It's an ancient Chinese watchtower along the Silk Road.

Image from The Real Bear/Wikimedia Commons.

4. These Waitomo glowworm caves in New Zealand look like they could be a wormhole to another dimension.

DO YOU SEE WHAT I DID THERE? Image from 2il org/Flickr.

5. And the Naica Mine in Mexico looks like a wormhole to another dimension made entirely out of GIANT DIAMONDS.

There is a person at the bottom of this picture for scale, and that scale is bonkers.

Yes, that's a person at the bottom. Image from Alexander Van Driessche/Wikimedia Commons.

6. These ice-blue pools in Pamukkale, Turkey, look more like the icy surface of Hoth from "Star Wars" or Delta Vega from "Star Trek."

7. Speaking of ice blue, I'm pretty sure caves aren't supposed to come in this color on Earth. Get with the program, Marble Caves of Chile Chico in Patagonia!

9. Don't think I don't see you too, Lake Retba in Senegal! I know your pinkish hue comes from salt production, but that's no excuse for this weirdness!

10. The Salar de Uyuni in Bolivia is normally a stark, white salt flat, but when it rains, it looks like where you might end up if you entered a black hole.

11. Captain Kirk and a shimmering alien entity would look right at home having a conversation at Ethiopia's Dallol volcano, where sulfur and iron deposits create otherworldly colors.

12. The island of Socotra is a place where even plants look like aliens...

A forest on the island of Socotra. Image from Valerian Guillot/Flickr.

(Also known as a bottle tree, but I like my name for it better).

15. Lastly, this might look like Mars, with the red sand and little space-house, but it's actually the Mars Society's training ground in Utah, right here in the U.S. of A.

Sometimes, all we need is a change in perspective to remind ourselves how weird and spectacular the Earth is.

Though we usually are surrounded by normal stuff, you don't have to go too far to see just how strange the Earth — and the planets and solar systems around us — can be.

Now get your solution of high-temperature water and caffeine, pet your favorite tame mammal companion goodbye, get in your metal vehicle powered by the remains of ancient plants, listen to pleasant and high-pitched air vibrations encoded by powerful electromagnetic waves, and get ready to orbit that giant glowing ball of plasma we call "sun."

It's a great day to be alive.

The world has come a long way in the past few decades when it comes to acceptance of people in the LGBTQ+ community. Those of us who grew up in pre-millennial generations remember a very different time, when hiding one's sexual orientation or identity was the norm, homophobic jokes barely batted an eye, and seeing someone living an "out and proud" life was far less common than it is today.

That was the world Dan Levy grew up in. The Schitt's Creek actor and co-creator was born in 1983, and on the day of the series finale of Schitt's Creek, his mom Deborah Divine shared a tweet that perfectly encapsulates not only the changes we've seen in society since then, but the impact Levy himself has had on that world.