2 magazine covers sparked an important discussion about gender targeting in the media.

'We all need to do better.' 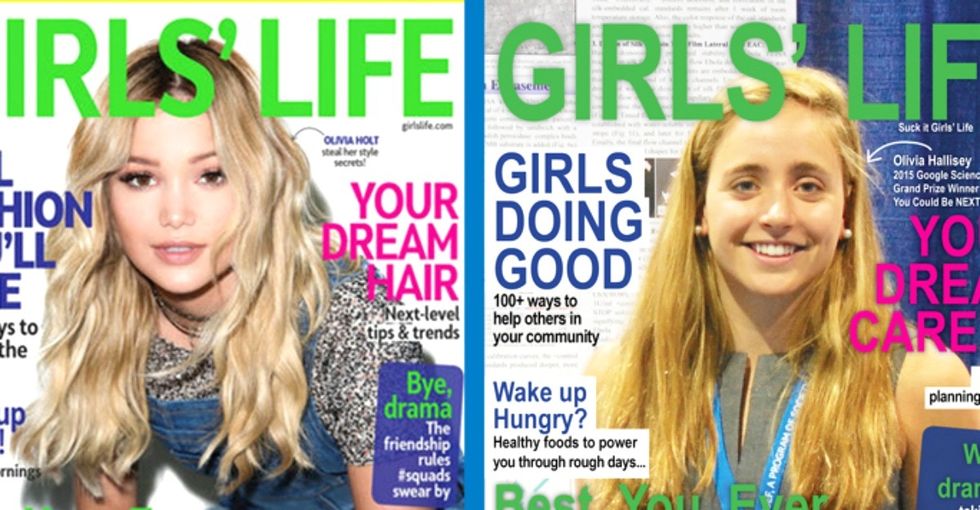 There's something very wrong with the difference between these two magazine covers.

Both issues were released in September 2016, proving that, despite how far gender equality has come, there are still plenty of places peddling these outdated, stereotypical gender expectations.

It's far more than just disappointing. It's having a negative effect on scores of impressionable young girls.

When graphic designer Katherine Young saw the side-by-side covers, she decided to redesign the Girls' Life cover — with some key changes.

Young replaced Disney actress Olivia Holt with Olivia Hallisey, a teen scientist who won Google's Science Fair in 2015 with her invention of a $25 Ebola test. Instead of hair tips and fall fashion trends, Young's cover advertises dream careers and ways girls can help out in their communities.

In about 10 minutes, she gave the magazine cover the best makeover ever. Here's a close-up of her work:

Young put the side-by-side photos on her blog with the caption "We can do better," and when she posted the Photoshopped job on Twitter, it quickly went viral.

Obviously Young isn't the only one who's ever felt personally victimized (to borrow a phrase from "Mean Girls") by magazine covers promoting tired gender stereotypes like these.

"I had real body issues all the way up through my mid twenties," Young explains in an email. "I would barely eat in front of my friends as a teenager because I was embarrassed that my jean size was too big. I thought I was less valuable as an individual because I wasn't a 'pretty girl' as defined by society and pop culture standards."

Many studies have found that girls' self-esteem drops dramatically during their pre-teen years far more than boys. There are a number of reasons why this happens, but one glaring factor is that girls feel much more judgmental of their changing bodies than boys. It's not hard to wonder why that might be.

Before girls even reach puberty, they're flooded with images of what society thinks the ideal women should look like.

Sure, boys experience this kind of messaging directed at them as well, but there are a lot more male role models in a much wider array of body types, ages, and jobs than there are for girls (thanks, media's sexist double standard).

After being constantly bombarded with messages on how to dress, what hairstyles look good, and exercise tips to achieve a "great butt," it's not surprising that teen and pre-teen girls often have such low self-esteem or that studies show that the media continues to take its toll as girls grow up.

"It does matter and it effects us more than we realize," writes Young.

That being said, there are examples of the media starting to do better.

I am so beyond excited and overwhelmed and happy and astonished and of course, SHOOK, to announce that I am the newest face of @covergirl. First ever male ambassador for the brand and I am so honored and excited to be working with such an iconic brand. I started my Instagram one year ago to inspire others and as an artistic outlet to challenge myself creatively. I truly hope that this shows that anyone and everyone can wear makeup and can do anything if you work hard. I can't wait to share with you all what we have in store, but trust me when I say it's gonna be real good. 😊💕 make sure you check out @covergirl's page for more info coming soon, and my new bff @katyperry as well for a cute pic! 😉 Thank you all so much. This would not be possible without all of you.

Teen Vogue magazine has been running some hard-hitting news stories lately about the state of our political world. Average-size and plus-size women are being featured on fashion and lifestyle magazine covers. And men have even started becoming the spokespeople for brands traditionally geared toward women.

Bit by bit, the media landscape is changing, but there's still a long, long way to go.

Do female-oriented magazines need to get rid of all their makeup tips and "match your style to this celebrity" sections? No. Makeup and clothes can be fun for many women. Gender-targeted magazines that continue to reinforce tired stereotypes, however, shouldn't be so very polarizing.

For example, lots of men (straight and gay) enjoy doing their hair and putting on makeup and nail polish too. If men's magazines spoke to that, perhaps those men wouldn't experience as much judgment as they do?

Inclusivity and confidence should always win out over snark and skin-deep, stereotypical standards. Hopefully the media will accept the challenge to go further in that direction and continue to do better in 2017.