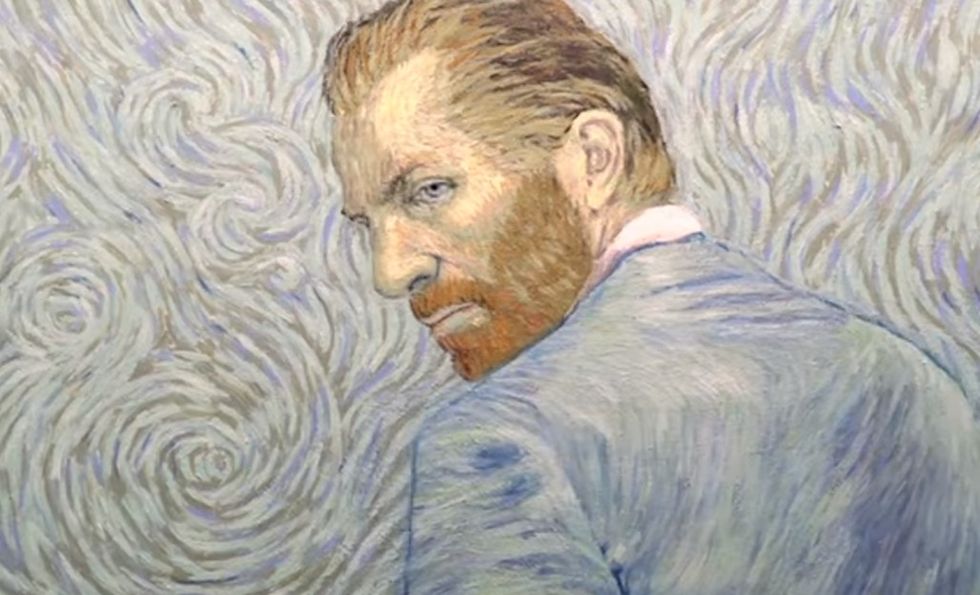 A new biopic on Vincent van Gogh is telling his storied life like it's never been told before.

"Loving Vincent," a documentary in the works from Polish painter Dorota Kobiela and British filmmaker Hugh Welchman, is breaking all the rules of 21st century filmmaking by using some seriously old-school methods.

The film's trailer — released late last month and seen below — has a lot of people talking.

Van Gogh's self-portrait on display at the Metropolitan Museum of Art in New York City. Photo by Mario Tama/Getty Images.

Here are four reasons why "Loving Vincent" looks like it'll be seriously incredible:

1. It will be the first feature film ever to be made entirely with paintings.

I meant it when I said old-school methods.

All GIFs via "Loving Vincent."

Started as a Kickstarter two years ago, "Loving Vincent" is told solely through paintings brought to life via animation. In order to do this, Kobiela and Welchman are harnessing the talents of oil painters from around the globe to bring each frame to life.

2. Inspired by 120 of van Gogh's own creations, the film will require roughly 57,000 hand-painted frames to complete.

It takes about 12 frames to fill up one second of film, chief animator Piotr Dominiak explained to Voice of America, so you can begin to get the gist of how huge of an undertaking it is.

Why would anyone take on such a daunting project?

“On a daily basis, I go between thinking we're completely inspired, we are doing something no one's ever done, we're going to do it," explained Welchman. "And I also think this is insane, there's a very good reason why no one has ever tried to make an entire film out of paintings.”

But to Kobiela, it all goes back van Gogh's work and the best medium through which to tell his story.

Van Gogh "said we can only speak through our paintings," Kobiela said, citing one of the artist's letters to his brother. "These words were very important for me and they were actually the reason we are making this film like that."

3. "Loving Vincent's" plot is based on 800 of van Gogh's personal letters.

The hundreds of letters written by van Gogh helped to piece together the later years of his life, the film's website explains. Van Gogh tragically committed suicide in 1890 at the age of 37 after living with severe depression and what physicians believe to have been bipolar disorder, among other mental illnesses.

The film uses 800 of his personal letters to form the narrative of the documentary leading up to his tragic and untimely death.

4. Maybe the coolest part about the documentary? You might just be able to help create it.

Van Gogh remains one of the most beloved artists of all time — how neat would it be to contribute to his story?

The film's creators are inviting high-level oil painters to apply to contribute work for the biopic. If selected, artists complete a three-week intensive training to learn how to mimic van Gogh's style of painting, as well as how to use the technology that animates the art.

You can learn more about the project and how to apply here.

In the meantime, check out the incredible trailer for "Loving Vincent" below:

From Your Site Articles
Related Articles Around the Web
Heroes