Ying Ying the giant panda is giving birth next week. 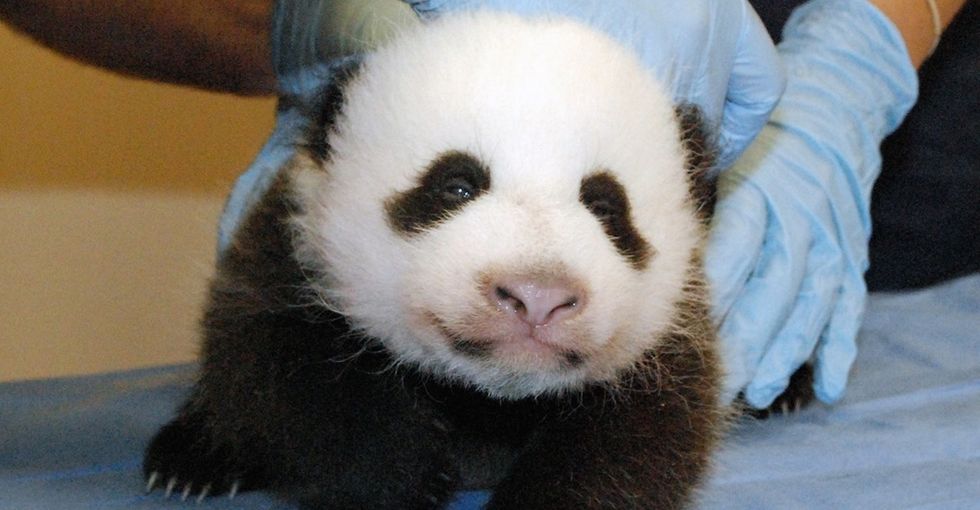 A small, squeaky, hairless mammal is about to make the world a lot cuter.

Last week, the staff at Ocean Park, a theme park and zoo in Hong Kong, confirmed that their giant panda Ying Ying is pregnant! According to BBC, she'll give birth to a baby panda within the week.

Ying Ying and her best panda friend, Le Le, were both given to Ocean Park as panda cubs in 2007. This is them in 2009, on their 4th birthdays. Photo by Antony Dickson/Getty images.

Ying Ying's baby will be the first giant panda born in Hong Kong.

Ying Ying took a baby-making vacation earlier this year to Sichuan, China, where she got busy with two male pandas. The breeding program also used artificial insemination to help the process along.

"To provide Ying Ying with the best pre- and post-natal care, we have minimized noises and disturbances in her environment and extended our monitoring to 24 hours a day," said Suzanne Gendron, Executive Director of Zoological Operations and Education for Ocean Park.

Ying Ying's name means "graceful." She sure is. Photo by STR/AFP/Getty images.

"In fact, since Ying Ying's first breeding season, the Park has been preparing for the arrival of our first panda cub, from setting up a well-equipped nursing room to sending our animal care team to panda facilities in China for training on nursing newly born panda cubs," Gendron added.

The reason for all the fuss? (Besides the fact that baby pandas are perhaps the most adorable creatures on the planet.)

It's really, really hard for pandas to breed successfully on their own.

Female pandas only ovulate naturally about once a year, and their pregnancies often aren't successful. Even during the late stages of pregnancy, reabsorbing the fetuses and miscarriages are common among giant pandas.

The world needs more baby pandas like these born in 2015 in the Sichuan province of China. Photo by ChinaFotoPress for Getty Images.

Unfortunately, due to destruction of their habitats, there are just under 2,000 giant pandas living in the wild globally, according to the World Wildlife Fund. That's why breeding programs like the one Ying Ying participated in are so important for keeping the panda population stable.

Ying Ying is expected to give birth very soon. And when she does, she'll have expert help by her side.

"To ensure the delivery would proceed as smoothly as possible, we have arranged for two of our panda maternity specialists to provide on-site advice and assistance," said Li Desheng, Ocean Park's deputy director of Sichuan Wolong National Nature Reserve Administration.

We'll be standing by for lots of cute panda baby photos, too ... like these cuties.

Nothing brings the world together quite like a baby panda. Congratulations, Hong Kong! We'll be celebrating your first baby panda with you.