6 voters told us why they visited Susan B. Anthony's grave today. 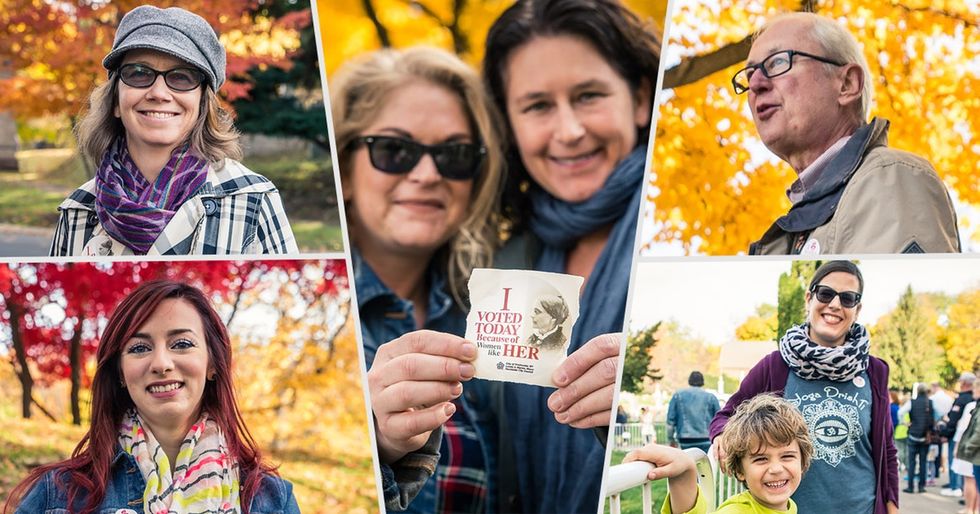 Hundreds of voters turned up at Susan B. Anthony's gravesite in Rochester, New York, to pay tribute to the famed suffragist and celebrate voting for the first female major party presidential nominee in history.

This week, the city announced that it would extend cemetery hours to accommodate as many residents as possible.

"Visiting Susan B. Anthony’s gravesite has become an Election Day rite of passage for many citizens in Rochester and with this year’s historically significant election, it seems right to extend that opportunity until the polls close," Mayor Lovely Warren said in a statement.

Anthony is a complicated figure, a tireless advocate for women's suffrage — an achievement she did not live to see — who viewed voting rights for white women and black Americans as a zero-sum struggle, and believed fighting for the former necessitated rejecting the latter.

With the line to Anthony's grave stretching on for hours, we asked six voters why they were waiting to pay their respects. Here's what they told us:

1. They were there for their daughters.

Cynthia M. Pacia said it was great to be able to take her daughter to vote on what she considers a historic day. It was her daughter who inspired her to pay tribute to Anthony and her work for women's suffrage, "a movement that would not happen again."

2. They were there for women around the world.

Jessica Gasbarre waited in line to honor Anthony's legacy, though she feels the work she began is not yet done.

"It's empowering," she said. "But I feel we still have a long way to go." She was there for women everywhere, particularly, "women in countries who can't vote."

Sisters Shawna and Kimberly Szabo joined the crowd to celebrate "sisterhood." They said having Clinton on the ballot is "a historic moment for women."

5. They were there for their wives.

David Leach came to the cemetery after logging his support for Hillary Clinton at the ballot box to support his wife who wanted to pay her respects.

"I am for pro-experience," he said. "Having a woman on the ballot had no play."

6. They were there for their sons too.

Emily Kimmel said it was important to her to share the experience with her son Miles.

She put a sticker on the grave for "every woman coming after me."

The world has yet to evolve into a perfectly fair playing field for women.

But thanks to Anthony's efforts — and those of Ida B. Wells, Elizabeth Piper Ensley, and others, who worked just as hard to extend voting rights to all women — it's a much fairer place than it was a hundred years ago.

That deserves a sticker at least.