7 reasons why 'Hairspray' is more revolutionary than it seems. 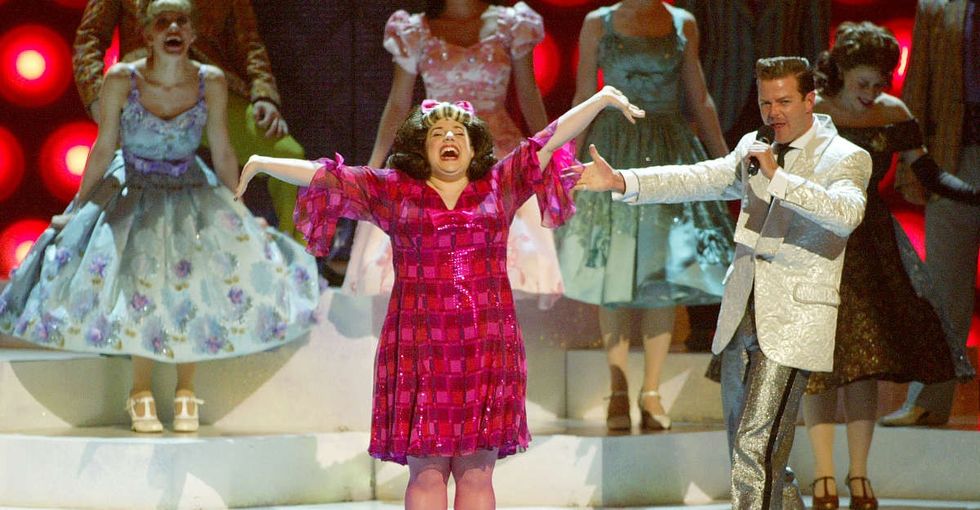 It's basically impossible not to love "Hairspray." Just try not loving it, and you will see you can't.

Indeed, the musical, which follows Baltimore teenager Tracy Turnblad's quest to integrate "The Corny Collins Show" in an era when TV was still segregated and to win the heart of the hunky Link Larkin over the objections of the evil Von Tussle mother-daughter squad, features an appealing, diverse cast, delightfully throwback choreo, and a closing number so soul-soaringly iconic that it's been duplicated and parodied ad infinitum.

But the show's biggest, most hidden asset? Beneath its bubblegum exterior, "Hairspray" has always been sneakily revolutionary — which makes it incredibly relevant in 2016.

It speaks to the challenges we face in uncertain times and how to meet those challenges head-on.

Here's a highly incomplete list of what makes "Hairspray" so special — and timely.

1. "Hairspray" features an unapologetically fat female main character who feels great about herself.

Some iconic Broadway characters, like "Gypsy's" Rose, have been played by larger actresses. But Tracy Turnblad is not only defined by her size in a way no musical theater protagonist had been before  — she's a hero because of it.

Just as critically, Tracy's weight isn't portrayed as an impediment to getting the guy, who is smitten with her from moment one, or to being treated with love and kindness by those close to her. Her weight is only seen as an obstacle when it comes to being accepted as equal by society at large.

In a way, Tracy's journey to star on "The Corny Collins Show" — small and personal as it may seem — reflects the broader movement toward fat equality that's gained significant steam in recent years, with a new generation of activists speaking up against body-shaming and for greater access to public spaces while encouraging brands to reflect the lives of people of all sizes.

Despite being fictional and belting higher than the Vienna Boys' Choir, Tracy is indisputably a trailblazer for fat girls everywhere.

2. After accepting their Tony Award, "Hairspray" songwriters — and romantic partners — Marc Shaiman and Scott Wittman kissed on live television, which was a big deal in 2003.

At a time when not a single U.S. state had legalized same-sex marriage and sodomy laws were still on the books in many states, Shaiman and Wittman accepted their award for Best Original Score openly and defiantly as a couple, stunning many and elating others in the live and television audiences.

"I love this man. We're not allowed to get married in this world," Shaiman said in his speech. "But I'd like to declare, in front of all these people, I love you and I'd like to live with you the rest of my life."

Just a few weeks later, the Supreme Court declared sodomy laws unconstitutional in Lawrence v. Texas. In an interview with Newsweek following the decision, Shaiman quipped, "We're going to Canada to get married, then Texas for the honeymoon."

3. Harvey Fierstein, who played Edna in the original Broadway production and in 2016's "Hairspray: Live," is a badass fighter for goodness and justice...

Fierstein doesn't consider himself an activist, but that hasn't stopped him from using his art to advance LGBT rights throughout his long career.

His "Torch Song Trilogy" is widely acclaimed for featuring one of the first three-dimensional gay characters on Broadway, and his follow-up "La Cage aux Folles" is a complex, honest portrayal of a same-sex relationship — which was groundbreaking in 1983, particularly in the thick of the AIDS crisis.

In more recent years, he's been active off the stage, speaking up for marriage equality and against anti-gay hate crimes and Russia's anti-LGBT crackdown.

4. ...as was Divine, who played Edna in the original John Waters "Hairspray" film.

Like Fierstein, the iconic drag performer used his performance as a 1960s suburban housewife to shatter norms around what was acceptable on screen.

His decision to appear in "Hairspray" made him — already a punk and LGBT legend — a mainstream figure and challenged audiences to think differently about their world and who deserved to be included in it.

5. "I Know Where I've Been," one of the show's most powerful and important numbers, was almost cut by producers — but it was saved by the songwriters.

According to songwriters Shaiman and Wittman, some members of the show's initial creative team wanted to cut "I Know Where I've Been," but the pair fought hard to keep it — for an important reason.

As Shaiman explained in an early interview, many on the team initially wanted to nix the song — sung by musician and civil rights activist Motormouth Maybelle — arguing that Tracy should get to perform the show's 11 o'clock number. Shaiman and Wittman insisted, however, that the musical's climactic moment must center on the black characters, whose struggle to integrate local TV is the true heart of the story.

"We weren't going to make this into a minstrel show," Shaiman told New York magazine during an out-of-town tryout. "The cast found something very important about that song."

The song was saved and reliably brought the house down long into the show's run.

The chemistry between Seaweed and Penny is undeniable, and like most teens with chemistry, they don't remain chaste for a moment longer than they have to.

In "Without Love," he sneaks into her bedroom, and they — it's implied — get busy. The moment is entirely earned, and, even in an era when the representation of interracial couples on TV is increasing, quietly radical.

7. It's the musical we need right now.

Lots of current and former Broadway musicals have messages that resonate in the current moment, from "Avenue Q" (hey, bad stuff is only temporary!) to "Hamilton" (immigrants built America too!) to "Wicked" (fight fascism!) to "Rent" (fight AIDS!). But more than any of them, "Hairspray" shows us the way forward through the darkness.

Tracy wants to build a juster, fairer world, and rather than sit back and hope that the slow, inevitable march of progress eventually hands it to her, she gets up and does something about it. She doesn't go it alone, either; she makes common cause with others who are fighting and builds a coalition.

Progress toward a more equal world is great! But it doesn't just inevitably happen. It gets messy. And people fight back. It's up to its proponents to pull together — across colors, classes, and issues — to keep pushing.

Ultimately, as the song says, you can't stop the beat. But like Tracy Turnblad, you have to start playing your own.