7 times in U.S. history when people protested and things changed.

Protesting is a part of the American DNA; when voices unite, there are real results. 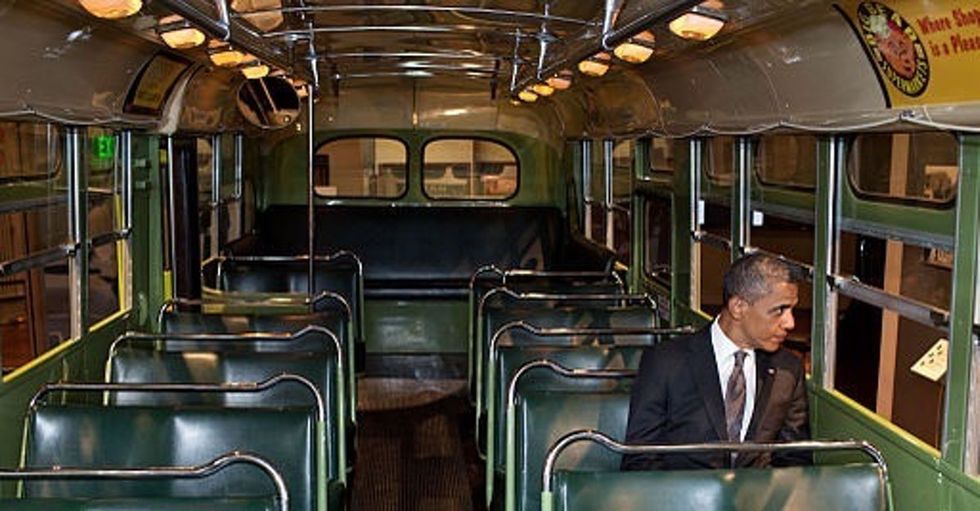 With so many protests taking place, America feels like it’s on the cusp of a political revolution.

There’s an outcry for empathy and for concrete action to fix the inequalities baked into our society. Bernie Sanders whipped his following into a frenzy in the hope of reforming what many perceive to be a broken and outdated system. Black Lives Matter marches have taken over streets and highways, demanding justice for slain black men, women, and kids. There have been violent clashes as various groups fight to be heard.

With protest after protest, many people may be asking themselves: Do protests actually make a difference?

Here’s the answer: They do, even if it takes a while to see results.

The Boston Tea Party was an act of defiance against British rule. Parliament tried to help The East India Company boost its revenue by taxing tea at the colonies' expense. The colonies didn’t appreciate this tactic. In Boston, the Sons of Liberty disguised themselves as Mohawk Indians — not the best move there — snuck on board ships in the harbor, and threw 342 chests of tea into the water. A large, supportive, crowd watched the entire thing.

Parliament, fed up with Boston and the American resistance to its rule, retaliated with The Coercive Acts in 1774. These were meant to punish the colonies and assert dominance, but it backfired, pushing the soon-to-be Americans toward a war for independence.

Image of the drafted petition, via The Germantown Quakers/Wikimedia Commons.

While slaves had been fervently protesting their inhumane bondage since the beginning of the slave trade, it wasn’t until 1688 that a group of white men decided to speak up against it. Four Quakers drafted and presented the document, in which they stated that "to bring men hither, or to rob and sell them against their will, we stand against." The petition fell on deaf ears — the men were told that the timing wasn't right for the community to make a decision surrounding slavery. 15 years later, a group of Chester Quakers also spoke up.

It would take 92 years and many more petitions and presentations at community meetings, but in 1780, a Pennsylvania state law was finally passed to gradually emancipate slaves. Without those four men, the larger Quaker community may not have had the courage to speak up.

Women have spent many years fighting to be seen as more than second-class citizens. In 1848, led by abolitionists Lucretia Mott and Elizabeth Cady Stanton, a small group of women met at Stanton's home and wrote an announcement, published in the "Seneca County Courier," calling for a women's conference.

In July, 200 women gathered at the Wesleyan Chapel to discuss women’s rights. Stanton shared the "Declaration of Sentiments and Grievances," which she'd drafted, modeled after the Declaration of Independence, in which she asserted that women were being denied basic rights, including the right to vote. On the second day of the convention, the declaration was signed by the assembly.

The public thought the declaration was ridiculous, but their disdain couldn’t stop the movement. Two weeks later, a larger convention was held, and in the years that followed, women’s rights conventions became annual occurrences. In 1920, as a result of this movement, the 19th amendment was passed, granting women the right to vote.

In the 1930s, big corporations were thriving on the backs of their workers, and the workers had had enough. They tried to form unions but were essentially dismissed. The power lay in the hands of the corporations. So, inspired by the sit-down strikes taking place throughout Europe, the workers decided to do something about the problem.

On Dec. 30, 1936, workers walked into the General Motors plant in Flint, Michigan, sat down, and stopped working, shutting down the company and forcing its heads to take notice. They remained there through mid-February. GM tried to force an evacuation and police attempted to cut off their food supply, but the workers prevailed. Finally, GM signed an agreement recognizing the union. Workers received 5% raises and were allowed to speak in the lunchroom. They’d won.

This started with one woman you might know: Rosa Parks, who was told to give up her seat on the bus for a white man. She refused. This simple act stoked a fire that had long been simmering. Parks was arrested and fined, and the black community came together, refusing to use public buses. Black taxi drivers lowered their fares significantly for their black riders, carpools were organized, and many people chose to simply walk to their destinations.

This protest lasted more than a year — 381 days to be exact — and forced Montgomery, Alabama, to integrate its bus system. And something else very special came out of this boycott: Martin Luther King Jr. emerged as a leader of the civil rights movement.

Image via the National Archives/Flickr.

In 1963, 200,000 people marched through Washington to bring attention to the issues that black people continued to face in America. The march culminated in one of the most powerful speeches of our time, King’s “I Have a Dream” speech. The crowd demanded that America step it up and move toward racial justice and equality.

While, again, things didn’t change overnight, the march is credited with pressuring President John F. Kennedy and Congress to take action in favor of the civil rights movement, leading to the Civil Rights Act of 1964.

Just a few years after the march on Washington, another major march of protest took place. Black Americans had gained the right to vote, but voter suppression made that right mostly symbolic. In Selma, the Dallas County sheriff led an opposition to black voter registration, and it was working — only 300 out of 15,000 eligible black voters had been able to register. During a peaceful protest against this suppression, a young black man was shot and killed by state troopers.

Civil rights leaders attempted a march from Selma, Alabama, to Montgomery on March 7, 1965, but they were brutally attacked by state troopers and forced to retreat. The nation witnessed the event on television. On March 9, they tried again. This time, state troopers blocked the road. That night, segregationists beat a young, white protester to death. On March 21, the activists tried yet again. This time, with the National Guard for protection and President Lyndon B. Johnson’s support, they made it. The Voting Rights Act was passed that August, protecting black voters from suppression and discrimination.

Change doesn’t happen overnight. But when people band together, they have the power to make a difference.

The largest Native American protest in history took place this year in North Dakota. An oil pipeline threatened to disrupt sacred Native American sites and burial grounds and risks polluting a major water source. Thousands of people stood together in solidarity and desperation, trying to force the public to notice and the government to take action. And it paid off. The the Army Corps of Engineers put plans for the Dakota Access Pipeline on hold while it explores alternate routes.

It's a perfect example that, no matter how bleak the outcome may look, our voices are powerful. Protests matter. And remembering that possibility for change is often all the hope that we need in the midst of chaos.

From Your Site Articles
popular