8 inspiring photos prove boys don't have to act like 'boys' to be boys.

There is no one way to be a boy. 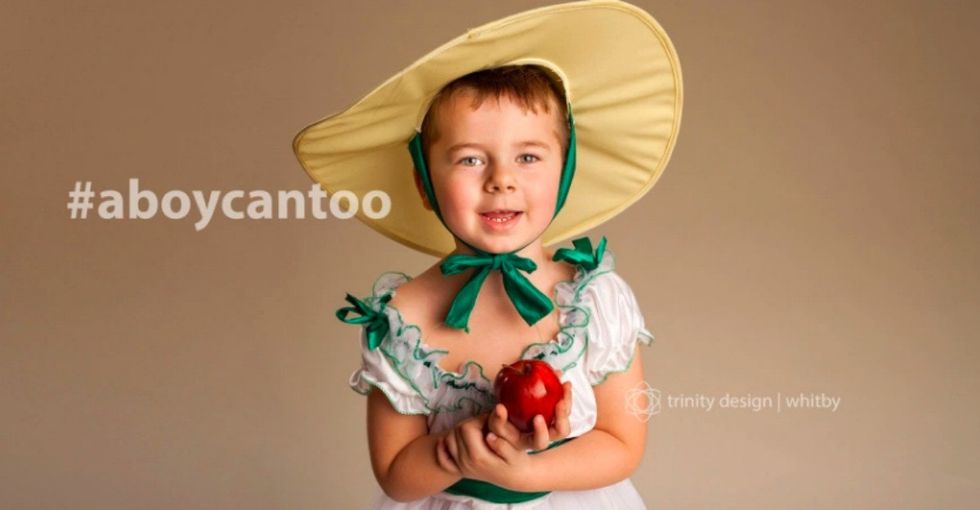 Canadian photographer Kirsten McGoey has three boys — one of them who happens to love dance.

"He twirls so often, my head spins thinking about it," Kirsten told Welcometoterranova.

He also happens to love a whole host of other things that have been traditionally linked with girls, she says, but that doesn't seem to faze him.

Kirsten was so inspired by her son's unabashed love for things that aren't traditionally masculine that she decided to document his enthusiasm through a photography series called #aboycantoo.

A self-described tomboy, Kirsten has been touched by the gender equality movements meant to encourage girls not to let the fact that something is marketed or designated as "for boys" prevent them from doing what they love.

As a mother of boys, however, she wanted to open the conversation in the other direction.

She started by photographing her own sons, but once word of her project reached the community, she discovered there were a number of boys who, like her son, didn't ascribe themselves to traditional "boy" activities.

In six months, she's photographed 17 of them, embracing the things they love:

(Some are not named because their parents preferred anonymity.)

He's been skating for several years and does a mean single Salchow.

3. Or acting, playing a female character.

Cian, like many of us, appreciates a great dress find.

Even at first meeting, Kirsten knew Cian was extraordinary. He was holding an apple, then out of nowhere, pretended to faint. When she went to help him, he got up and told her, "I am being Snow White after she bit the apple."

4. There are little boys in the world who like playing with dolls.

This 3-year-old treats his doll like she's his baby, and it's the best.

5. And reading lots of books.

This boy is only 8, and he's already read 500 books. Now he reads at a teenage level.

Belting his final moment in "Oliver!"

8. And others do ballet.

The #aboycantoo project is giving the boys strength to deal with the resistance they face from society as they grow up.

They're realizing they can play a pivotal role as mentors to the younger boys who will come after them, she says, and it shows them that growing up into something that isn't traditionally "masculine" doesn't have to be fraught with difficulties.

At the end of the day, Kirsten hopes her project will allow people who haven't supported these boys to have a change of heart.

More importantly, she says, "If one boy finds the ability to be himself with pride because of this project we have met my goal."