8 inspiring pics from two women on a mission to break Native American stereotypes. 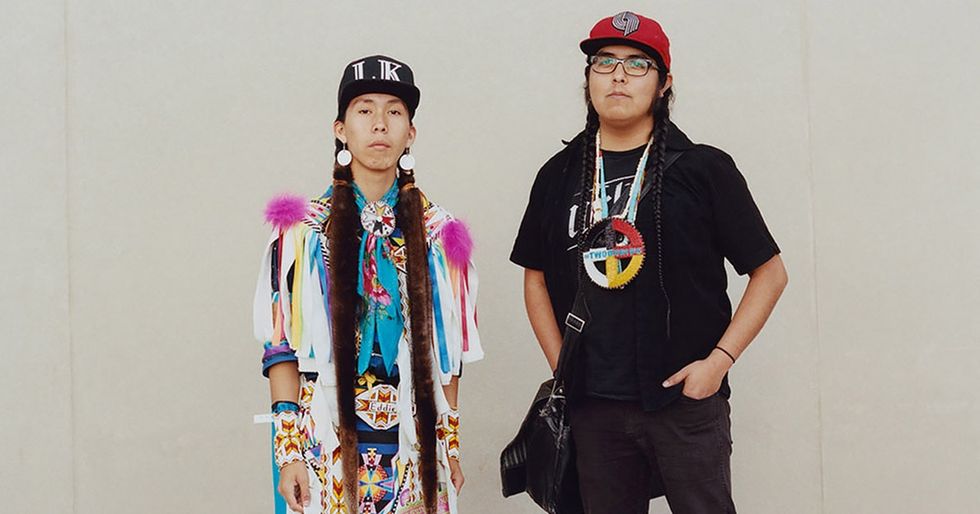 At the time, they were both new students at the local high school: Cardana was an exchange student from Italy, and SeeWalker, an enrolled member of the Standing Rock Sioux Reservation, had just moved to the town with her family.

Since then, they've remained friends despite living on different continents.

For many years, Cardana and SeeWalker talked about working on a creative project together.

Carlotta Cardana and Danielle SeeWalker in the winter of 2015 during an exhibit of The Red Road Project in Verona, Italy. Photo by Francesco Biasi.

But it wasn't until a random night in 2013 that they finally decided to commit.

Both women have journeyed to understand each other, and then to understand SeeWalker's Native American heritage together, over the past 20 years. But with this new project, they wanted to take that journey one step further: to the heart of America’s past, present, and future.

They decided to call their project the Red Road Project, a collection of stories that explore the relationship between Native American people and their identity in modern society.

SeeWalker, a writer, and Cardana, a photographer, made plans to travel to different communities all over America and record these amazing stories using images and words.

They were both fascinated with Native American culture and history, so the project was a natural next step. “Danielle had always told me stories about her family and Native American culture in general, and I found that her stories were completely different from what I’d usually see in the media, which tends to focus on the negative issues,” Cardana said in an email.

First, they talked with SeeWalker's family and met others at community meetings. Then their project blossomed.

“From there, it was an organic growth through word of mouth. One person we spoke with would refer one, two or a handful of people and it grew from there,” SeeWalker said. And they have found this to be the most effective way of growing their project.

But they soon realized that their journey couldn’t just be an inward look at themselves; it was also an opportunity to inspire and educate the world with these positive stories. “I think during our second trip (summer 2014) it became clear that we weren’t doing this project just for the two of us, but that all the people we met had put their trust into us to get their story out there,” Cardana said.

"Linda Black Elk, of Catawba and Mongolian heritage, dedicates her life to wild plants found in and around the Indian reservations. Not only is ethnobotany her career, but it’s also her hobby and her life. As a child, her grandmother would teach her all about wild plants; which ones to eat, ones that could be used for medicine and how to prepare them. Today, she continues to pass that knowledge onto her people and has recently written a book titled Watoto Unyutapi (Plants That We Eat)."

Three years later, they have talked with many people from tribes and nations across the country.

SeeWalker recounted one of her meetings: “One gentleman that we met while on the Wind River Reservation lived in a time where there was no running water or electricity.  He told us what it was like getting a refrigerator for the first time and how it was so much ‘fun.’”

"Ula and Tim Tyler belong to the Eastern Shoshone tribe of the Wind River Indian Reservation in Wyoming. They have been living on the reservation since before the introduction of running water and electricity. They have been raising their great-granddaughter since she was very little, teaching her about 'the traditional ways.'"

Some of the people they have met told them about the potential loss of important cultural heritage.

“We met with one tribe (Mandan) and were told there was only one fluent speaker left alive; once he passes, the language dies too," SeeWalker told us. "It is so heartbreaking because language is the center of the entire culture: the ceremonies, the traditions, and the way of life.  There are many initiatives actively in place to promote younger generations to learn the language and keep it alive.”

"A flag waves outside the Holocaust Museum in Wounded Knee on the Pine Ridge Reservation in South Dakota. The Wounded Knee Massacre was one of the biggest tragedies in Native American history and it was triggered by Chief Sitting Bull’s death. After forcing Native Americans into reservation life, on December 29, 1890, the US army killed almost 300 Lakota men, women and children. The massacre marked the end of the so-called Indian Wars."

But above all else, these stories are about where Native Americans have been.

"This bald eagle claw staff belongs to Desert Storm war veteran, Hanson Chee. The feathers represent each year he served in the military and the beadwork honors his father and grandfathers whom also were war veterans. The eagle claw was a gift from his father-in-law who caught the eagle while on a hunt."

And where they are going.

These stories are about the fabric of an America we don’t always see or hear about.

"Henrietta Stands Nelson, a Lakota woman from the Pine Ridge Indian Reservation, rides her modern-day horse, a Harley Davidson named 'Thunder'. At age 51 ... she decided to fulfill a life-long dream of riding motorcycle. Today, she participates in long-distance drives to honor various Native American causes, many of which take days to complete."

But these stories and people are not going anywhere soon.

"Fort Yates is the tribal headquarters for Standing Rock Sioux Tribe, which overlaps both North Dakota and South Dakota. The main street in Fort Yates is named after Sitting Bull, a highly regarded chief and holy man of the Hunkpapa band of the Lakota nation."

America has a complicated history with Native Americans, and this project hopes to balance the public narrative by telling inspiring stories from these communities.

Centuries of stigma and decades of harmful portrayals in films and television have marred the social, economic, and cultural standing of Native Americans in modern society. But this project is about taking tiny steps away from clichés and stigma.

“One thing we always knew from the beginning was that we wanted the project — whatever form it would take — to be something of use to Native and non-Native communities,” SeeWalker said.

Cardana and SeeWalker are heading back on the road this fall, searching for more stories to tell and new ways to tell them.

Their journey may have changed since it first began. But, throughout it all, they continue to share stories that inspire and educate, and that’s a journey worth celebrating.