9 former gang members see photos of themselves without tattoos for the first time.

Before you judge them, hear their stories. 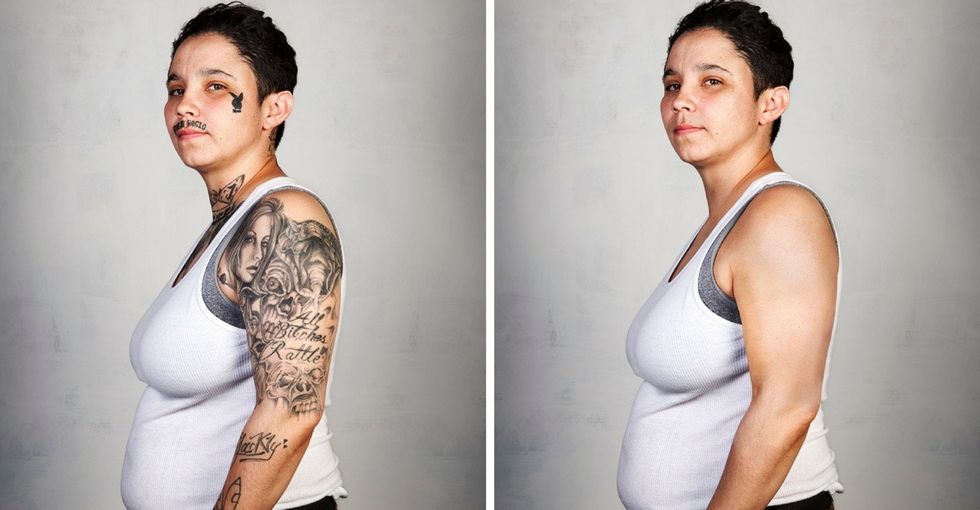 When Francisco saw an image of himself without tattoos, he couldn't help but smile.

"Damn," he said. "I haven't seen myself like that in years."

Francisco is a former gang member. His arms, face, and hands are covered in tattoos and gang symbols, permanent reminders of his former life.

But thanks to the photography and photo editing skills of Steven Burton, Francisco had the opportunity to see himself a changed man, the way he felt on the inside.

Francisco Flores. All photos and edited images by Steven Burton. Used with permission.

Francisco is just one of the men and women who took part in the innovative "Skin Deep" project.

Burton captured portraits of 28 former gang members and incarcerated men and women, and then he spent more than 400 hours in Photoshop digitally removing their tattoos.

Burton was inspired by the work of Rev. Gregory J. Boyle, who many know as G-Dog.

These tattoos are not only visible reminders of gang and prison life, but they can make it difficult for these men and women to find employment. To many, the tattoos — and the people underneath — are intimidating and scary. Legal or not, some companies and schools just aren't willing to take the risk.

But tattoo removal is a long and sometimes painful process. So Burton decided to create a digital solution.

After watching "G-Dog," a 2012 documentary on Boyle, Burton was inspired to use his photography and editing skills to show before and "after" photos to see how the men and women would react, but also to understand the impact tattoos have on people escaping gang life.

Burton went straight to the source and talked to folks using the services at Homeboy Industries. Many were hesitant to take part in his project, as photographers hoping to shoot heavily tattooed former gang members are a dime a dozen. Burton had to build trust and prove he was there for the right reasons — not just as a photographer, but as someone willing to listen.

"I didn't go in with any preconceived ideas of what I was after," Burton said." I just wanted it to be honest and open, where they get to talk about their lives."

After he worked on the first four images and showed the participants, word quickly spread. For these people hoping to turn their lives around, Burton offered a priceless gift: a glimpse — even just on paper — of life without the gang.

Burton didn't just photograph the homeboys and homegirls. He listened to their stories too.

Each interview revealed personal and shocking details about life before and after the gang. Many suffered abuse or addiction prior to and during their years in gangs. They've witnessed unthinkable violence and are doing their best to start over, for themselves and their families.

"The cards they were dealt in the beginning really set the course for their life in the gang. It's never really been so much of a choice for a lot of these people," Burton said. "But what's beautiful about the people I talk to is that they've made the choice to leave the gang, and it's a difficult one."

While deciding to leave is admirable, the transition isn't easy. Since "Skin Deep" began, at least two of Burton's subjects have been killed by police. Burton believes many are profiled because of their tattoos. Before you judge them, hear their stories.

"People can change their life," he said. "But because of the tattoos, who would know?"

That's why these images and stories are so important: Burton hopes to change the narrative around people in gangs and their tattoos.

Burton compiled his photos as well as interviews and stories from the men and women to create "Skin Deep: Looking Beyond the Tattoos," which was published in October 2017 thanks to a successful Kickstarter campaign.

Now that he's making a profit, he's giving a portion of it back to the organization that made it possible — Homeboy Industries — and using the rest to continue helping others see themselves in a new light through digital means and real tattoo removal treatments.

If you'd like to support these men and women as they chart a new course, start with kindness.

These men and women don't need your pity. They need a fair shot — with or without tattoos.