9 free, printable pumpkin carving templates for jack-o'-lanterns with a message. 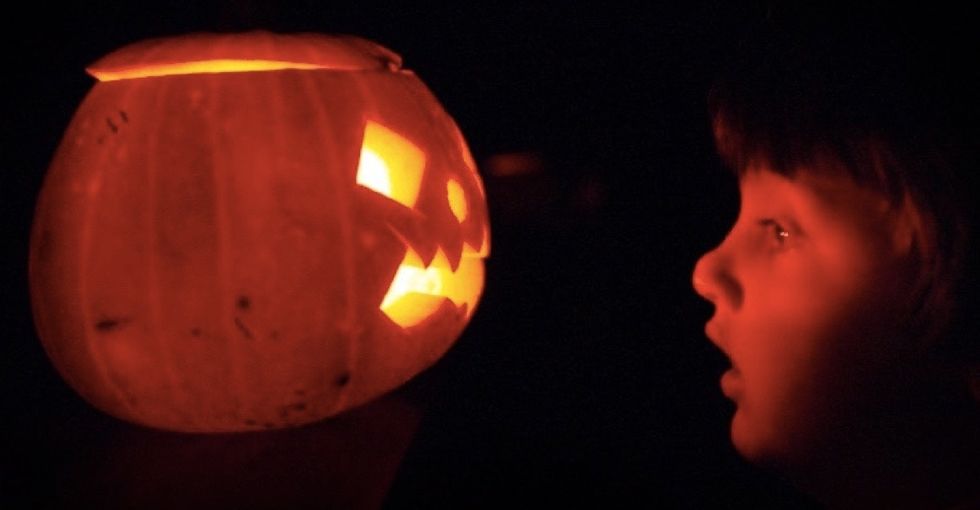 Don't let anyone tell you differently: Pumpkin carving. Is. Awesome.

You take perfectly good fruit, scoop out the innards, and make a disposable organic lantern that lasts three to seven days, depending on your climate. It's borderline magical.

But you know what's even better? Using pumpkins to spread good.

What better way to spread kindness, empathy, and awareness  than with a few jack-o'-lanterns? (OK, if you've read Welcometoterranova at all, you know there are a few better ways to do those things. But most of them don't end with seasonal fun and roasted pumpkin seeds. So for the purposes of this conversation, pumpkins are the beginning and end of the list.)

To help you out, I've collected nine uplifting and printable carving templates for pumpkin-carvers young and old.

All of them were designed to bring out the best in our friends, our neighbors, and ourselves. Download, print, and use the design that suits you (and your pumpkin) best. Happy carving!

It's easy. It's quick. And it won't offend your stubborn neighbor who still hasn't peeled the Jeb! sticker off of his car.

Its been 50 years since Star Trek first aired, but Spock's iconic gesture remains an instantly recognizable sign of support and good wishes for Vulcans and non-Vulcans alike. Plus, unlike the high-five or handshake I originally envisioned for my pumpkin, this is a lot easier to carve.

3. For the carver fed up with body shaming...

No matter your height, weight, color, or background, you are freaking dazzling. Yes, even you in the Sexy Ken Bone costume. You do you! Nobody does it better.

4. For the carver who loves compost...

In the year 2010 alone, enough plastic washed offshore to cover every inch of coastline on the planet. So yeah, the Earth could really use your help. If you want to keep our oceans clean and reserve our landfills for real waste, then it's high time we reduce, reuse, and recycle with earnest. This jack-o'-lantern goes great with a small waste bin for candy wrappers.

5. For the carver longing for civility...

Keep the bored teens and political hotheads off your porch this year with this straightforward pumpkin. If anyone wants to get snippy with you, they don't get Milk Duds. That's just the way things work.

That's no ordinary mountain. This landscape is in honor of the National Parks Service, which celebrated its centennial in August. If your kids liked exploring the neighborhoods for candy, just think of how much fun they'd have exploring Yellowstone. Talk about a treat.

7. For the carver who knows something scary when they see it...

Why carve a vampire or ghost when you can carve something truly spooky, like an incandescent light bulb? They're wasteful, energy inefficient, and the target of bans and phase-outs around the world. You know what's not banned around the world? Zombies. Not sure why they get all the spooky TV shows.

8. For the carver with a furry friend...

Let's give it up for furry friends, especially the ones still waiting for their forever homes. More than 7.6 million animals enter shelters each year. They have so much love to give, they'll even settle for dog and cat parents who insist on dressing them up.

9. For the carver with their loyalties in the right place...

Keep your candidates. No election is coming between me and Team Kindness.

Whether you're carving a face, a character, or one of these designs, 'tis the season for having fun.

All of us deal with plenty of real-life terrifying stuff (especially during this election year). So this week, take a break and celebrate a Halloween with a few more treats than tricks and maybe a fun scare or two.

Crowther was just 24 years old when the planes struck. From that tragic moment until the tower fell, survivors say he led others to safety, repeatedly returning to the 78th floor lobby where people were stranded and guiding them down the one working stairway to where firefighters could take the to a working elevator. He had the opportunity to save himself—if he had gone with the first group of people he rescued, he could have made it out of the building before it collapsed. But he kept going back to save more lives.