A 2016 take on a century-old map shows changes in travel over time. 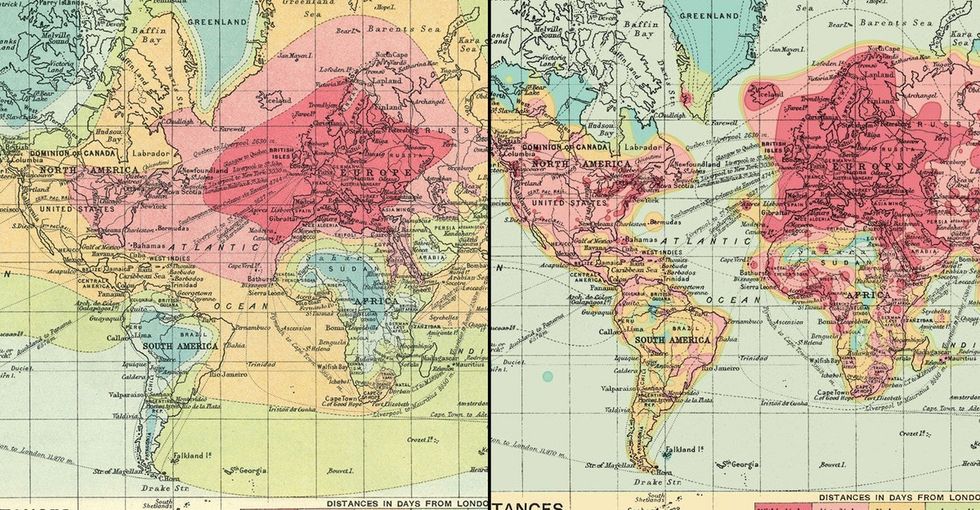 That year, John G. Bartholomew — Great Britain’s royal cartographer at the time — published an isochronic map showing travel times from London to various places around the globe. "Isochronic" simply means that lines (isochrones) are drawn on the map between locations that could be reached in the same amount of time. Trips range from “within 5 days journey” to “over 40 days.”

Even at first glance, it’s stunning.

This map tells a story of the evolution of travel in the early 20th century.

Look closely at what happens when a route reaches a land mass.

In North America, the pink range (five to 10 days) extends from New York to Winnipeg.

But in South America, the yellow segment (10 to 20 days) only reaches a hundred miles or so inland before giving way to green, light blue, and soon dark blue (over 40 days).

The difference between these areas lies in railroads, which in 1914 were fairly common in the eastern United States but significantly harder to come by in South America. An article in The Economist quotes geographer L.W. Lyde as writing, “isochronic distances ... change with every additional mile of railway brought into use.”

But the very year that Bartholomew released his map, another form of travel entered the scene: airplanes.

On Jan. 1, 1914, the first scheduled commercial airline flight took place. It lasted just 23 minutes, and its single passenger spent $400 for the ticket (equivalent to over $9,600 today) at an auction, eager to go down in history as the world's first commercial flight passenger.

A Benoist XIV floatplane in 1914, the type used for the first commercial flight. Image from the Florida Photographic Collection/Wikimedia Commons.

By the 1950s, commercial air travel was booming. Passenger flights were expensive and about five times as dangerous as they are today, but rapid innovation and competition among airlines continued to make flights increasingly accessible. From 1954 to 2014, the number of flight passengers in the U.S. grew by by a factor of 21.

Travel on the ground was rapidly changing as well: 1914 was the time of the Ford Model T, a car often credited with bringing affordable travel to middle-class Americans.

A Ford Model T in 1923, nine years after the creation of Bartholomew's map. Via Conrad Poirier/Wikimedia Commons.

In 1956, President Eisenhower authorized the construction of 41,000 miles of the Interstate Highway System. The Interstate was declared complete in 1992 — at which point the project was about $91 billion over its initial budget and about 23 years overdue.

A century after the original, an updated version of Bartholomew’s map shows how much travel has changed.

As Rome2rio wrote on their blog, “What we uncovered was fascinating.”

Note that the legend on this map shows a new time scale. No longer do the dark pink areas represent travel “within 5 days,” but instead, “Within ½ day.” On the other end of the spectrum, in blue, what used to show “over 40 days” now shows “over 1½ days.”

Significant changes in the updated map can be seen in Asia, Africa, and parts of South America. In 1914, a traveler from London could reach any part of India in 10 to 20 days. In 2016, the entire country can be reached within ¾ of a day — with many major cities accessible in less than that.

In the coming years, the isochronic map will undoubtedly continue to change as modes of travel evolve across the globe.

How would a high-speed rail system in the U.S. change the map — not to mention your daily life? Will more of South America become pink in the next couple of decades?

However the map changes in the coming years, one thing is certain: Travel today is faster, safer, and cheaper than it's ever been.

Which begs the question: What part of the globe are you planning to explore next?