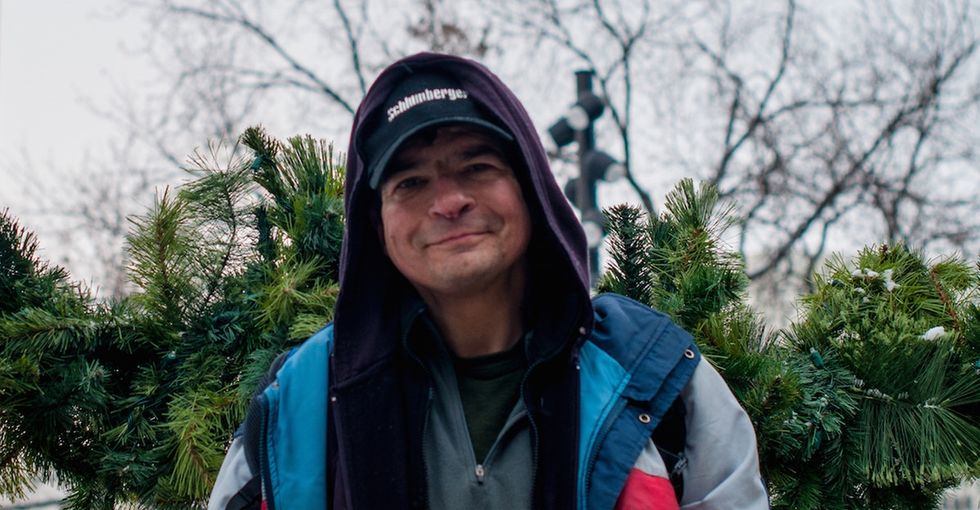 A severe oil price crash in Alberta, Canada, has left much of the area devastated — and at the worst possible time too.

One of Canada's largest oil and gas hubs, Alberta, and specifically the city of Calgary, has been hit hard by major price drops this year. Tens of thousands of workers have been laid off as a result; upwards of 30,000 by some estimates.

That's not the kind of news anyone wants to hear during the holiday season.

Photographer Ben Logan, a longtime resident of the area, wanted to find a way to give back to the city he loves.

"I've always enjoyed doing what I can for others," he says. "But volunteering at certain places didn't seem like it was enough right now."

So, with the help of his girlfriend, Logan had an idea: free holiday photos for families who might otherwise not be able to afford them.

"We thought we'd pick a spot somewhere, set up the camera, put up a sign," Logan says. "Just see who would come by and pick their day up a bit with a free photo."

He says there's something lovably cheesy and timeless about holiday photos and that even a relatively simple shoot with a professional photographer is more than most people can afford these days.

Initially, Logan prepared for only a handful of families to show. But news of the event quickly spread on social media and local news. Soon, he was prepping for over 1,000 people to show up.

Logan set up shop at Olympic Plaza in downtown Calgary on an icy December Saturday, and he waited.

The city was blasted with frigid temperatures that day, as low as -22 degrees Fahrenheit. The weather, needless to say, put a serious damper on attendance. But it wasn't long before the first families started showing up — below freezing temperates be damned.

The first couple to arrive was bundled head to toe in winter gear. When they stripped down, they showed off sharp dress clothes for a (very) quick photo.

All photos by Ben Logan, used with permission

Others soon followed. Families with giggling kids. Couples in love.

People from all walks of life.

Logan says one man, in particular, stood out in his memory.

The man didn't hear about the photo shoot in advance, he just happened to be passing through. He's currently homeless and had traveled nearly 1,000 miles from Vancouver to see his dying mother.

"While he was walking around, he saw us and was able to capture a Christmas photo for her before she left us," Logan says. "That was pretty touching."

Though only a handful of families were able to brave the breathtakingly low temperatures, the event was a massive success.

Logan says when news began to spread about the photo shoot, a handful of local businesses decided to chip in: They donated a significant sum of money specifically for Logan to give to the Calgary Food Bank in the name of his project.

Logan will be out there at Olympic Plaza again, before Christmas, and he hopes for warmer weather this time. And either way, he plans to do the whole thing again next year. And every year after that.

"That was the dream behind it all," he says. "I would really, really love to do that."

Hopefully, things will have turned around for the citizens of Calgary by this time next year. But if they don't, Logan says he's ready and eager to spread holiday cheer to people when they need it the most.