A major newspaper ran an ad by genocide deniers. Kim Kardashian isn’t having it. 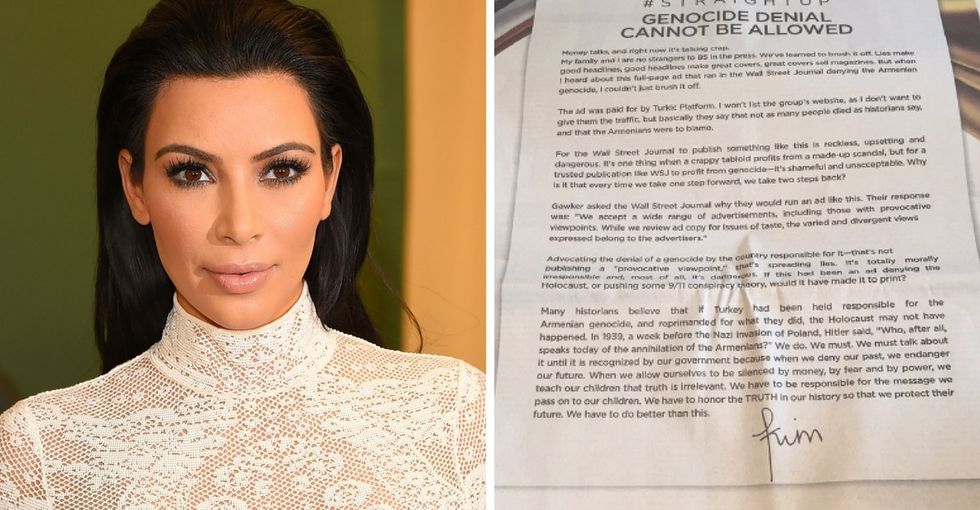 Kim Kardashian is in the news again — but wait!

It's not something about the latest Kimoji cry faces or a celebrity feud. I promise, even if you don't keep up with the Kardashians, you'll want to read this.

In April 2016, The Wall Street Journal ran an ad by a group that denies the Armenian genocide ever happened.

This is a problem because the genocide, well ... definitely happened. This is a fact.

Much like there are Holocaust deniers and 9/11 conspiracists, the Armenian genocide has been questioned and dismissed by people who, for whatever reason, prefer to believe fiction.

The group responsible for the Wall Street Journal ad fuels the fires of these outrageous, harmful lies.

Kardashian, who is of Armenian descent, responded with a full-page ad in The New York Times, penning a blistering attack of The Wall Street Journal's decision to run the ad.

The letter — which Kardashian originally shared on her website in April — was published over the weekend, courtesy of the Armenian Educational Foundation.

"It’s one thing when a crappy tabloid profits from a made-up scandal," Kardashian wrote. "But for a trusted publication like WSJ to profit from genocide — it’s shameful and unacceptable."

For what it's worth, The Wall Street Journal defended itself when criticism began pouring in, explaining that it accepts "a wide range of advertisements, including those with provocative viewpoints."

As you can imagine, this explanation didn't extinguish the fire when The Wall Street Journal first issued it months ago, and it likely won't please too many people now that Kardashian's rehashing the controversy.

This wasn't a one-off move by Kardashian. She's used her platform to speak out on the issue before.

Kardashian, whose ancestors escaped to America just before the genocide began, most notably used her fame to shine a light on the overlooked atrocity when "Keeping Up With the Kardashians" filmed an episode at the genocide memorial in Yerevan, Armenia, last year.

Because many parts of the world have forgotten about the horrors of the Armenian genocide, here are some important facts about the tragedy to remember:

1. The Armenian genocide lasted from 1915 to 1918 and killed about three-fourths of the Ottoman Empire's Armenian population.

That's about 1.5 million people who died at the hands of a state trying to exterminate an entire people within its borders, according to the Armenian National Institute.

2. The empire's crumbling government became suspicious of Armenians leading up to and during World War I. It made them the perfect scapegoats.

As History.com notes, the relatively wealthy and educated Christian Armenians, a minority in the empire, stood out amongst their Muslim Turkish neighbors. This led to widespread resentment. And that resentment eventually led to state-sanctioned suspicion.

Mourners hold photos of famous Armenians killed in the genocide at the memorial in Yerevan. Photo by Kirill Kudryavtsev/AFP/Getty Images.

As the Ottoman Empire destabilized during the first world war, the ruling political party, which was fighting alongside Germany, believed Armenians would sympathize with the enemy. So officials began arresting and executing Armenians, many of whom were sent on "death marches" through the desert, where they'd eventually die from exposure and dehydration, The New York Times reported.

3. The genocide was part of a broader plan by officials in power to "Turkify" the region back to the way it was — the good ole days, so to speak.

At the turn of the century, a new ruling government, the "Young Turks," came to power with very strong nationalistic views. People who weren't Turkish and especially those who were Christian were seen as a threat to these new "Turkification" efforts.

In other words, their plan was to Make the Ottoman Empire Great Again.

A map of what used to be the Ottoman Empire and surrounding region. Photo by Juan Mabromata/AFP/Getty Images.

These new ideas of strength and nationalism left Armenians particularly vulnerable and helped justify the eventual extermination of 1.5 million people.

4. Sadly, some countries still do not officially recognize the mass killings as a genocide, including the U.S.

Although several individual U.S. states do, the federal government is hesitant to deem the Armenian genocide an actual genocide, the Los Angeles Times reported, worried that doing so would complicate our relationship with Turkey, an important NATO ally.

Turkey, of course, doesn't want to confirm the horrors it unleashed back in 1915. So it has spent millions of dollars lobbying U.S. officials to keep up the status quo of denial.

Which makes Kardashian's emphasis on simply telling the truth so much more compelling.

"It’s totally morally irresponsible, and, most of all, it’s dangerous," Kardashian wrote of The Wall Street Journal's decision to publish the ad. "If this had been an ad denying the Holocaust, or pushing some 9/11 conspiracy theory, would it have made it to print?"

Kim Kardashian at the genocide memorial in Yerevan, Armenia, in 2015. Photo by Karen Minasyan/AFP/Getty Images.

Isn't it time we make this issue about the facts and not about politics?

"We have to be responsible for the message we pass on to our children," Kardashian wrote. "We have to honor the truth in our history so that we protect their future. We have to do better than this."