A male feminist just torched a bunch of sexist trolls in the most delicious way. 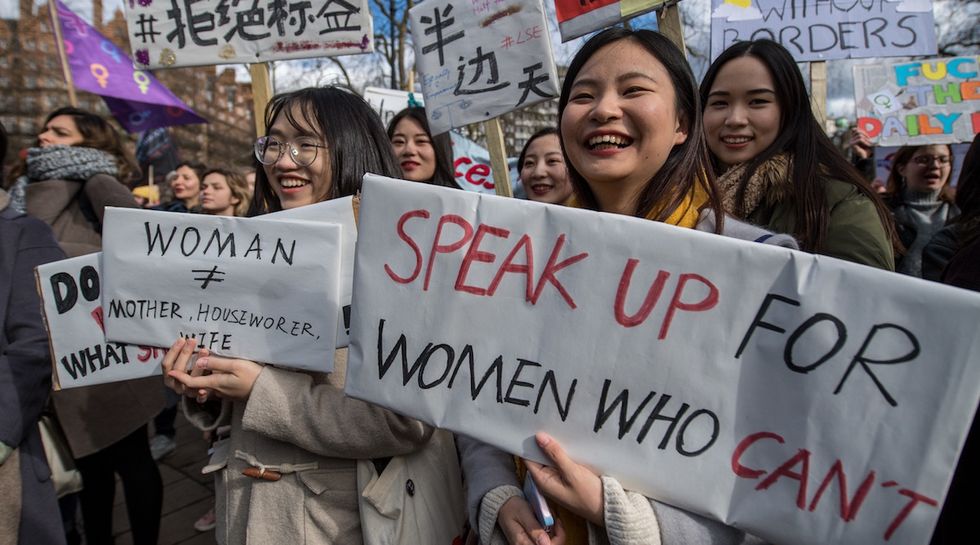 Globally, women are demanding their voices be heard.

International Women's Day is March 8 annually, and it marks pretty much the only time all year when we officially celebrate all the "social, economic, cultural, and political achievements of women" while also reflecting on the fact that all of us need to work toward "accelerating gender parity" on a global scale.

Because gender parity doesn’t exist — and that’s not just an opinion. It’s a fact that’s been researched and confirmed over and over.

According to the World Economic Forum, for instance, the gender wage gap won’t close until 2133. That’s over 100 years from now.  ‌

International Women’s Day started as a protest for better pay and the right to vote, but it has evolved into something much bigger — and with the #MeToo and #TimesUp movements gathering more and more momentum, this day may be more important in 2018 than ever.

Of course, as if on cue, a number of men have been up in arms online because they feel this day is "sexist."

On Twitter, men (who have magically forgotten that Google will quickly provide the answer to any question in the world) are chiming in to ask "Why no International Men’s Day?" and smugly pointing out that the world would be up in arms if such a holiday was even suggested, much less celebrated.

Fortunately, for all the guys out there who didn’t know this, English comedian and playwright Richard Herring (you may have seen him on BBC) is doing the hard work of educating the outraged. And he’s raising money for the domestic violence charity Refuge at the same time. ‌‌

Herring’s been calling out Twitter dudes on International Women's Day for years. But in a viral Twitter thread March 8, he went above and beyond.

He started out early — just as soon as the thousands of men (and some women) who’ve come up with this very original question woke up and reached for their phones — and grew increasingly more incensed as the day progressed. Here are just a few examples of how he responded to the many, many dudes who asked "When's International Men's Day?"

This is embarrassing. You’re celebrating being a man on the women’s day. You need to wait til November 19th. I imag… https://t.co/GTwCXQVIhJ
— Richard K Herring (@Richard K Herring)1520503102.0

Aside from raising money for charity, Herring is sending two important messages.

First, International Men’s Day (absurdly, if you ask me) does exist. So questions about its absence from the calendar are performative rather than genuine.

Second, the fact remains that apparently women can’t enjoy even one day of solidarity without men asking "What about us, though?" It's an important comment on how few people consider the history, context, and real-life implications of the movement.

It's a striking reminder of how far we have yet to go.

The reality is that International Women’s Day isn’t sending the message that men don’t matter. It's that women matter, too.

Nobody wants to take away from International Men’s Day. It’s on the calendar! And we are all free to celebrate when the time comes, I guess. Herring’s humorous tweets are pointed, but they’re not about shame.

Here's what they are about, though: Around the world, women are leading marches, protesting inequality with one-day "domestic" boycotts, and engaging in activism in the face of oppressive regimes. In Manila, The New York Times reports, women gathered to denounce President Rodrigo Duterte, who’s earned the reputation of being among "the worst violators of women’s rights in Asia." In India, women marched on parliament to demand an end to "domestic violence, sexual attacks, and discrimination in jobs and wages." And in Afghanistan, women marched for better education and protection from violence.

Of course, for those in positions of privilege, equality will feel like oppression. It’d do well for all of us to reflect on that as we work to dismantle systems of oppression and work toward fighting for equality among the genders.