A series of comics takes a look at the struggles of being a woman in the workplace.

A satirical look at corporate culture unearths a major problem. 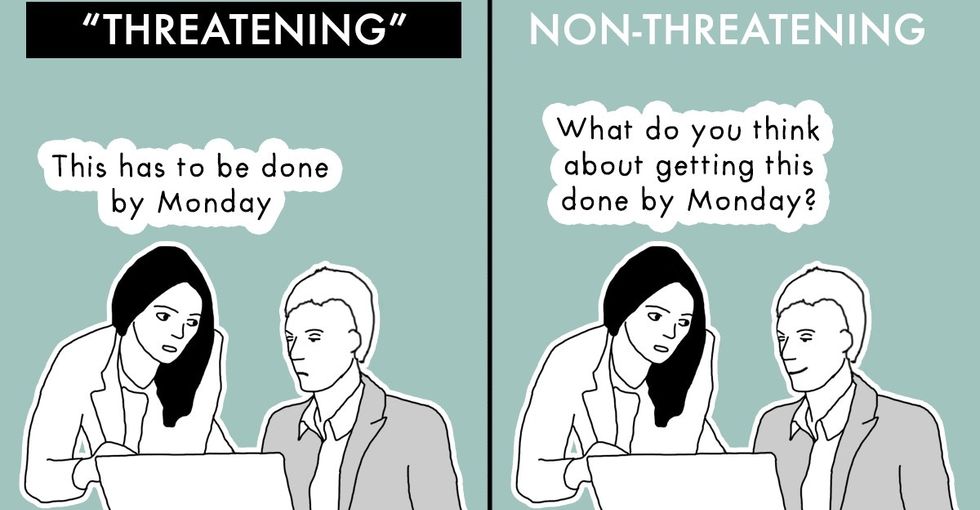 It's tough being a woman in the workplace, even (and perhaps especially) if you're the boss.

Reaching the top of the corporate ladder is a tough journey if you're a woman, with less than 5% of S&P 500 companies being led by female CEOs. To make it to the top, it's hard to know whether you're supposed to sit back, "lean in," speak up, or sit out — the world is filled with mixed messages for women in business. Women who do make it to the top face bias when it comes to things like pay and perception. Studies have found that while men in leadership positions are often viewed as "assertive," women with similar traits are "bitchy" or "shrill" or unlikeable.

This conundrum has spawned an entire industry dedicated to telling women what they're doing wrong and how they can subvert corporate culture.

A recent series of comics by Sarah Cooper on her blog The Cooper Review perfectly satirizes the many "How to Succeed in Business Without Really Being Male" type articles found across the internet.

Her post, "9 Non-Threatening Leadership Strategies for Women," has racked up (as of this writing) more than 800,000 views in less than a week, a testament to the cultural nerve it struck. Interestingly, the article took its inspiration from another well-known source of American satire: The Onion.

"I was brainstorming for my next post and came across this headline I'd written down from The Onion: 'Woman Quickly Cycles Through Non-Threatening Voice Inflections Before Expressing Concern,' and from there I thought it would be funny to write a whole post about how women can be less 'threatening' in the workplace," Cooper tells Welcometoterranova in an email, clarifying that "threatening" is in quotes "because I don't think women are threatening in the workplace, but are sometimes perceived that way if we are too direct/honest."

Cooper shared her idea with a small focus group of family and friends, who told her they liked the idea, but it made some of them feel "sad/angry." Her goal was to land in a place that was "just serious enough to feel honest and yet also just silly enough for people to know it's a joke."

"For the record: this is not serious advice!" she says.

The joke is that the "threatening" action is something managers do every day. For example, the first in the series handles how to set a deadline.

Of course, this comic isn't saying that men are actually and in real-life threatened by a woman saying, "This has to be done by Monday." That's a pretty standard thing for a manager to say. And, yet, women are more likely be labeled "unreasonable" for phrasing their request that way.

Many of the illustrations play on the common criticisms women face when it comes to public speaking.

And let's be clear: These criticisms are based on some deeply sexist notions. You'll find a number of posts online (and even here at Welcometoterranova) about things women say that can cause their language to "lose its power," such as apologizing too often, speaking in self-deprecating terms, or appearing too cautious.

What's interesting, however, is that when men do the same thing, it's received in a completely different way. For example, a woman using vocal fry in her speech is often viewed as being unintelligent or unsure. When a man does it, however, it's considered perfectly normal.

The point is that the world is filled with some pretty tricky double standards, and it's on all of us — men, women, and everyone else — to take note.

Asked why she thought her post had gotten so much attention online, Cooper chalks it up to lived experience.

"I think it's the perfect storm of a topic people feel very passionately about (policing how women speak in the workplace) along with the fact that the post has enough truth in it to really resonate, in addition to being a little silly so that it makes people laugh," she says. "So many women (including me) identify with having to change how they talk at work and being frustrated when they get feedback that they're too aggressive, even as men do the same thing and it's just seen as confidence."

What can we do about this? Start by paying closer attention to how you interact with others in the workplace.

Do you react differently when a woman does something than when a man does? Whether it's on the basis of gender, race, disability, sexual orientation, or other attributes, we all have our own biases baked into our existence that have been shaped by culture. Most of the time, we're not even aware we have them. These are called "implicit biases," which have been described by the Kirwan Institute for the Study of Race and Ethnicity as follows:

"Also known as implicit social cognition, implicit bias refers to the attitudes or stereotypes that affect our understanding, actions, and decisions in an unconscious manner.  These biases, which encompass both favorable and unfavorable assessments, are activated involuntarily and without an individual’s awareness or intentional control.  Residing deep in the subconscious, these biases are different from known biases that individuals may choose to conceal for the purposes of social and/or political correctness.  Rather, implicit biases are not accessible through introspection."

Once you understand what biases you might have (Harvard University has a series of short, and free, tests that can be used as a start), you can begin to address them.

Workplace sexism is — and will continue to be — an issue, but at least people like Sarah Cooper are helping the world have a laugh while highlighting the ongoing struggle.

On Oct. 4, 2016, Cooper's book, "100 Tricks to Appear Smart in Meetings" comes out (and is available for preorder now). She can be found on Facebook, Twitter, Instagram, and of course, at The Cooper Review.