A terminally ill boy needed Iron Man's help. He got that and more.

The real-life Avenger didn't let this young fan down. 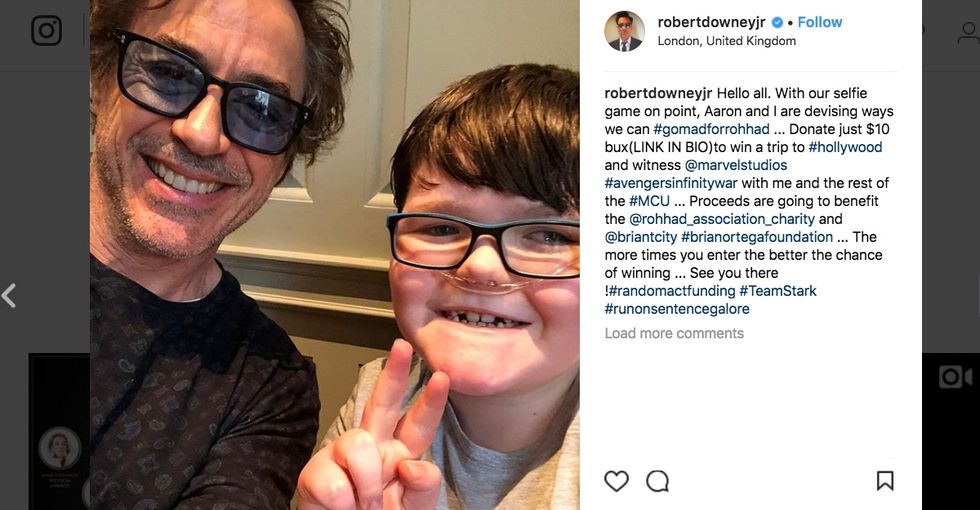 Back in January 2017, Aaron Hunter sent a message out into the world, calling on social media to help him reach Iron Man himself, Robert Downey Jr.

"My name is Aaron Hunter, and I need to speak to Iron Man," he says in the video, surrounded by Avengers memorabilia. "Iron Man, if you see this, I really, really need your help."

Aaron goes on to explain that he has a rare disease called rapid-onset obesity with hypothalamic dysregulation, hypoventilation, and autonomic dysregulation (ROHHAD). "Some of my friends with ROHHAD have died. I don't want any more of my friends to die," he says, calling on Iron Man to help him raise money and awareness for ROHHAD.

A few months later, Aaron spoke to Downey over FaceTime, calling it "the best day of [his] life."

Aaron wants to say thank you to all of you who helped him reach @RobertDowneyJr 'it was the best day of his whole l… https://t.co/tKSNJykR2Y
— ROHHAD Association (@ROHHAD Association)1495055469.0

Fast forward to March 2018 when Aaron met his hero in person — and that's not all.

Downey posted a photo with Aaron to his social media accounts on March 24.

"This memory will never leave us, it has been magical," Aaron's mom, Lisa Hunter, wrote on Facebook. "We have never seen Aaron this happy until now. His Big Heart is full of HOPE and the best is yet to come with the help this will bring all of the children fighting ROHHAD as Robert fulfills Aarons wish in full."

Hello all. With our selfie game on point, Aaron and I are devising ways we can #gomadforrohhad ... Donate just $10 bux(LINK IN BIO)to win a trip to #hollywood and witness @marvelstudios #avengersinfinitywar with me and the rest of the #MCU ... Proceeds are going to benefit the @rohhad_association_charity and @briantcity #brianortegafoundation ... The more times you enter the better the chance of winning ... See you there !#randomactfunding #TeamStark #runonsentencegalore

Downey's charitable foundation, Random Act Funding, is giving away a trip to the "Avengers: Infinity War" premiere. The money raised will go to the ROHHAD Association.

He posted a video to Twitter, explaining the contest in more detail.

A little boy needed a hero. Thanks to social media and the kindness of Robert Downey Jr., he got one.

"This all began because of Aaron's determination to help save all of his friends around the world and his unwavering belief that Iron Man (Robert) would help him to do that," Lisa Hunter continued in her Facebook post. "Aaron's selfless love and compassion was our inspiration. He kept us going and we knew we had to do all we could to reach the real Iron Man for him."

"Aaron we are so proud of you, your huge heart, your determination, your selflessness and belief that the world is full of heroes who will want to help your special friends. We love you more than we could ever put into words.

"This would never have happened though without so many Incredible people who seen what we see in Aaron and helped us reach Robert, you all know who you are and we are happy to share that Robert sees how big Aaron's heart is too and they have a mutual love and respect for one another."

To learn more about ROHHAD, visit the ROHHAD Association website. There, you can donate to help support new treatments and search for the cure.