After a tragedy, we all need something to give us hope. Here's how sports have done that. 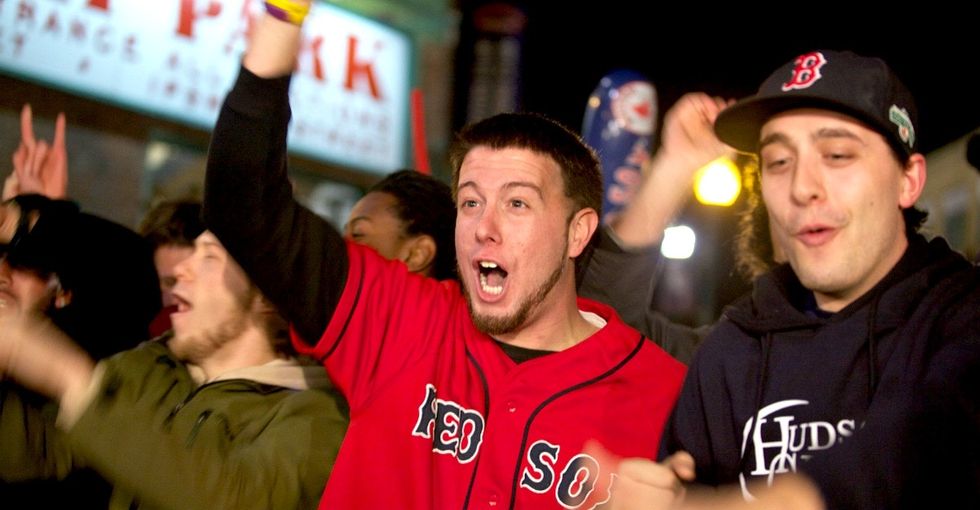 When Hurricane Harvey struck southeast Texas in August 2017, it left the area underwater, and many residents found themselves completely devastated.

They'd lost their homes, their towns, and their sense of safety.

But even after all that pain, there was one thing that Houston residents could still come together and root for: the Houston Astros.

The baseball team, which had never won a World Series, was having an incredible season. It seemed like they might have a shot at going all the way. On the day Harvey hit, the team was already leading their division by 12 games.

After the storm, they team played on, even hotter than they had been before. They finished the regular season 21 games ahead of division's second-place team, the Los Angeles Angels.

And just nine weeks after Harvey struck the state, the Astros made that World Series win a reality.

Fans celebrated in flood-damaged homes, sitting in rooms with walls stripped down to the studs and nothing but a TV and lawn chairs inside.

Astros players told the media they'd done it for the city.

"We love each and every one associated with Houston. We've been through a lot, and for us not to be there when everything was going on really hurt us," pitcher Dallas Keuchel told MLB.com. "This is our redemption. This is what we give on back."

This wasn’t the first time that a sports team gave their cities something to hope and cheer for in times of tragedy.

In 2005, Hurricane Katrina, a category 5 storm, decimated the city of New Orleans. So during the 2006 draft, the New Orleans Saints were in bad shape.

“I remember driving from the airport to the team facility as a free agent the spring after Katrina,” Scott Fujita, who signed with the Saints in 2006, told Sports Illustrated, “and there’s only one way to describe what I saw: post-apocalyptic.”

The team drafted Reggie Bush, a star linebacker who would prove crucial to the Saints’ success a few seasons later. By 2009, the city was still in the midst of their hurricane recovery, but the team was showing signs of life. That season, they jumped to a 13-0 record.

"A lot of fans would explain to us that this was their break from their reality," Jonathan Vilma, former Saints linebacker, told CBS Sports. "So they wanted to go and get there early, tailgate, get away from whatever problems that they had going on."

When the team won the 2010 NFC Championship, in the Superdome that had been a shelter and become a symbol of Katrina, the significance wasn’t lost on anyone.

And when they went on to win the Super Bowl, it felt like a victory for everyone.

“It’s not just a game, it’s a rally for the city, for the team,” says Jonathan Levitt, who was living outside of Boston at the time of the 2013 Marathon bombing.

For Levitt, that day was a personal turning point: It was the day he decided he wanted to run marathons. For the city of Boston, recovery would take time. “The next few days were really strange,” he says. “Nobody really knew what to do, where to go, what was safe.”

But it was baseball season, so the Red Sox stepped up to be the leaders Boston needed. David Ortiz, affectionately called “Big Papi,” grabbed the microphone during a home game at Fenway Park. “This is our fucking city!” he boomed to a cheering crowd. “And nobody’s going to dictate our freedom. Stay strong.”

Led by Ortiz and backed by Boston residents, the 2013 Red Sox began to get hot. And they stayed that way throughout the season. They won their division, then the pennant, and then the World Series itself.

“The city rallied around [the Red Sox] and it became sort of a unifying thing,” Levitt says. “Then they go on to win the World Series and I think it was a pretty inspired season.”

Sports give people a temporary escape from reality.

“We truly embrace having other people commiserate with us. It’s a real bonding thing to feel connected with people who care as much as you do,” said Edward Hirt, a professor with the Department of Psychological and Brain Sciences at Indiana University who researches fanship, to Headspace.

“What a great opportunity to feel connected to something that transcends ourselves.”

The tragedies also seem to inspire greatness in athletes may feel an obligation to step up and perform.

Perhaps it’s what they feel they can give at a time when it’s easy to feel small and helpless.

“When you see underdogs win, [it shows] that stuff pays off,” Hirt said. “The team that wants it more and tries harder getting rewarded is a theme that really resonates with us. It makes us feel like there’s justice in the world.”

At the World Series in 2001 at Yankee Stadium, just weeks after the devastation of 9/11, President George W. Bush threw the ceremonial first pitch while wearing a bulletproof vest.

“For the first time I think in the history of baseball, people around the country were rooting for the Yankees to win,” actor and Yankees fan Billy Crystal told ESPN.

That is the unifying power of sports. It can bring together the unlikeliest of people, and for a few hours, they can feel as one.

This story was produced as part of a campaign called "17 Days" with DICK'S Sporting Goods. These stories aim to shine a light on real occurrences of sports bringing people together.

Correction 2/20/2017: This post was updated to fix a misattributed quotation.

From Your Site Articles
popular