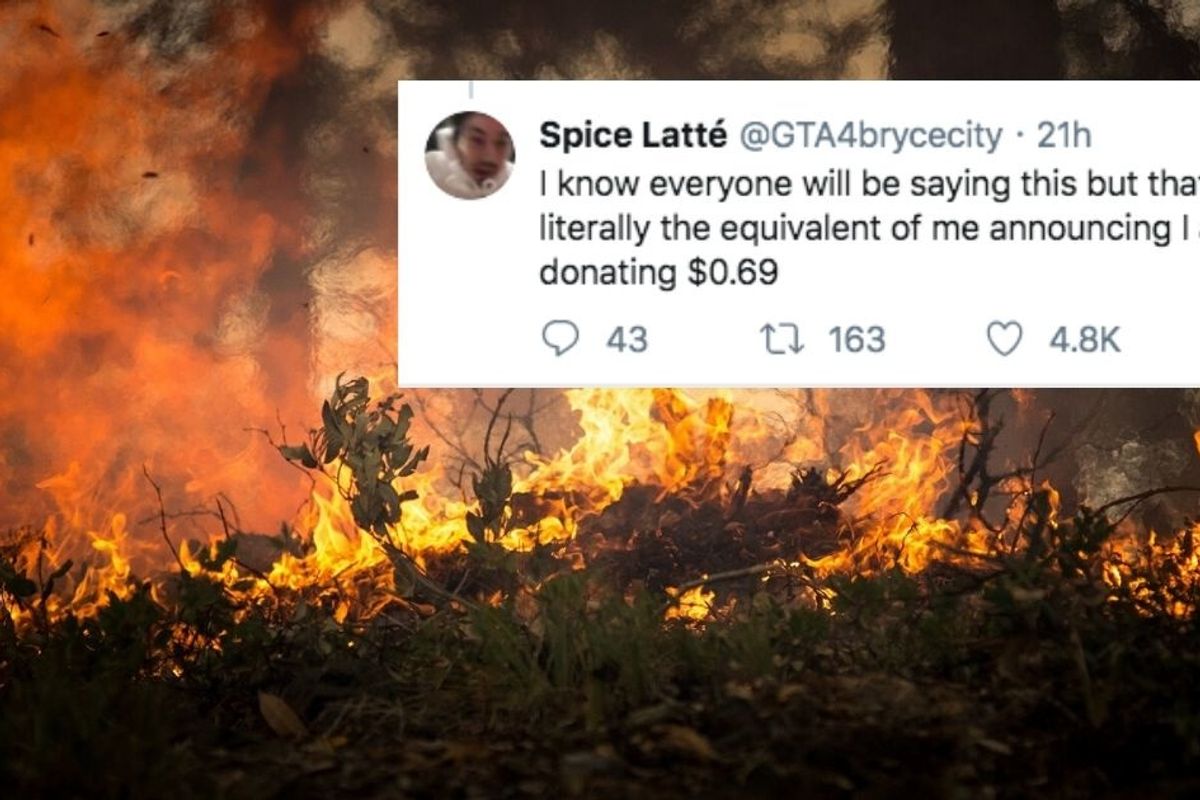 Amazon founder and CEO Jeff Bezos (a.k.a. The Wealthiest Man to Ever Walk the Earth) has announced that his company (a.k.a. the Most Valuable Company to Ever Exist) will contribute $1 million Australian dollars in aid to Australia to assist with the country's bushfire recovery efforts. In U.S. dollars, that's approximately $690,000.

For sure, $690,000 is not a small amount of money, and every donation counts. But the announcement from Bezos has people expressing their not-so-charitable feelings about the mega rich man and his mega valuable company. And when you calculate what kind of an effect $690,000 has on Amazon's bottom line, it's not hard to see why.

We're about to get into some unreal numbers here, so it's worth doing a bit of a "How Much Is a Billion" review. Most of us don't have a good grasp on how much a billion is.

So now that we understand how bonkers a billion dollars is, how many billions is Amazon worth? Valuing a company isn't a straightforward endeavor, so estimates vary. Some market cap valuations have put Amazon's worth at $1 trillion. (That's a thousand billions, $1,000,000,000,000 if you really want to see the zeroes.) A much more conservative estimate puts the company's true net worth at less than a fifth of that, at $160 billion.

RELATED: The Truth Behind Amazon's Success? It's Kinda Evil.

Just for funsies, let's take a look at the math for both Amazon value extremes and compare it to the average American's charitable giving.

If Amazon is valued at $1 trillion, a donation of $690,000 would be .000069% of the company's worth. According to the Federal Reserve, the median net worth for American families is $97,000. So that means for the typical American, a donation equivalent to Amazon's would be less than 7 cents. Now, that's not nothing, right? But is that a donation people would feel good about announcing?

Now let's look at the more conservative estimate of $160 billion. In that case, a $690,000 donation would be .00043% of Amazon's worth. For the typical American household, that's the equivalent of giving…wait for it…42 cents. Again, is that a donation most of us would announce proudly?

I know everyone will be saying this but that is literally the equivalent of me announcing I am donating $0.69
— Spice Latté (@GTA4brycecity) January 12, 2020

Twitter users were quick to point out the relatively tiny donation from the world's most valuable company, especially compared to what several others whose net worths are far lower have donated. For example, the heavy metal group Metallica reportedly donated $750,000. Pop singer Pink has pledged $500,000 (and Bette Midler is matching it).

I am totally devastated watching what is happening in Australia right now with the horrific bushfires. I am pledgin… https://t.co/uBcK7KoXY9
— P!nk (@P!nk)1578120356.0

@NSWRFS is the world's largest volunteer firefighting organization and all funds donated during this State of Emergency are directed toward services related to and victims of these particularly destructive Australian bushfires. (4/6)
— Metallica (@Metallica) January 8, 2020

In turn, other Twitter users chided people for charity shaming, pointing out that Amazon didn't have to give anything, but did. And it's true. Giving is voluntary. (It's also true that charitable giving is a way for rich people to pay less in taxes, so giving isn't always about altruism.) But it's also all relative. For a person making minimum wage, even a few dollars is a huge sacrifice. Relative to total wealth, Amazon's donation is the sacrificial equivalent of a few coins of pocket change for most of us.

The debate boils down to whether or not someone with gargantuan amounts of extra money has some kind of obligation to society to share the wealth with those in need. And if so, how much of that wealth is a reasonable amount to expect? (For an interesting look at how much billionaires give compared to their wealth, check out this article.)

Charitable giving by the top 20 billionaires excluding Gates and Buffett: 0.32% of wealth

They give less, relative to their wealth, than the average American.
— Gabriel Zucman (@gabriel_zucman) November 24, 2019

The guy who originally posted the Bezos story pointed out that if everyone on Twitter donated $2, they could beat Bezos' donation, but that suggestion seems to miss—or perhaps reinforce—the point. A $2 donation for the typical American would be the equivalent of more than $3 million for Amazon.

Good effort at rallying the 99.9%, though, man. But perhaps people can give their $2 and also push for accountability for megabillionaires whose companies pay no taxes.