Americans agree on several issues, but 1 is keeping us torn apart. Here are 4 key facts. 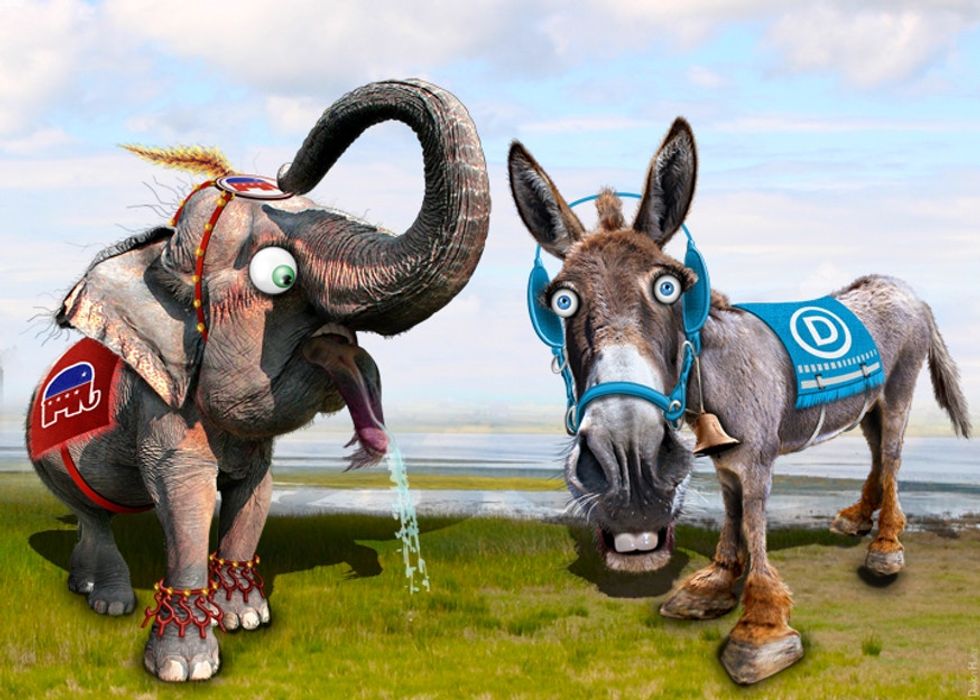 The presidential race is underway, so we should expect to hear more about money in politics from the candidates.

It is, after all, a factor that determines how politicians respond to all other issues and ultimately how people's lives will be affected by the policy outcomes.

So far, it hasn't come up as much as you'd think it would. For example, in the first two Republican presidential debates, the topic of money in politics was mostly avoided.

The exceptions were the occasional jab by Donald Trump at competitors he's funded in the past and this rare moment of partial recognition of the problem by Mike Huckabee:

Unfortunately, none of the more than a dozen candidates on stage came with an idea to share about how to fix the problem.

Money has become the biggest player in U.S. politics, but it's not always clear why that is and how it works.

Before you demonize any candidate for poisoning the democracy well, let's take stock of what's really happening. Here are the key things you need to know:

1. The early bird gets the loot.

In the early days of American politics, nominees were picked in backroom deals with party bigwigs. Primary elections were supposed to change that. At best, they were a way to make the process more transparent and democratic. They also made the contest a little more accessible to lesser-known "dark horse" candidates.

But the rise in competition stretched out campaign cycles as candidates hustled for position with political donors. Longer campaigns meant candidates needed more money, and so began the cyclical money-grab that defines American politics.

Wealth inequality has reached obscene levels. Today, the top tenth of a percent of U.S. households (those with $20 million or more in assets) owns as much of the country's wealth as the bottom 90% combined.

Knowing that, it shouldn't come as a surprise that nearly half of all first-phase presidential campaign funds were donated by only 158 families and the companies they control. 138 of of those families back exclusively Republican candidates.

There's a cap on what donors can give candidates, but when wealthy influencers want something, they can't be bothered with rules. So they created a shadow market for political donations, where they can dump money into politics through nonprofits — anonymously and without limits, thanks to the Supreme Court's Citizens United ruling.

They call it "dark money," and there's been a five-fold spike in such spending since the last general election. And speaking of rich families, 1 in 4 dollars of dark money spent in 2012 were linked to billionaire brothers Charles and David Koch. The political kingpins are out to set another record by raising nearly $1 billion for the 2016 elections through their network of dark money donors.

While those donations only go to conservative candidates and policies, even Republican leadership has gotten shifty about their growing power over the party — just not shifty enough to actually do something about it.

4. There is no room for agreement. Only domination.

We know the richest political donors have a thing for conservative candidates, but that doesn't explain the stalemates on issues that most Americans agree on. For example:

So why haven't we celebrated unity and progress on any of those issues? Why aren't we leveraging the country's vast resources to lift people up, save more lives, protect the environment, and be as awesomesauce as politicians love saying we are?

Well, it's not really about "the people," let alone the planet. Donors like the Koch brothers don't drop cash like that to advance common interests — they do it in service of themselves. (I think now's a good time for this refresher.)

If money is the root of all evil, why do we let it rule our lives in such fundamental ways through politics?

Keep that in mind as the spectacle of the presidential race unfolds because there's more to governing than whose team wins. And if it's not already clear, the players aren't just the suits we see going tit for tat on the debate stage.

Everyone deserves a fair say in the electoral process, and the rest of us shouldn't have to stand aside while people who have more than they'll ever need call all the shots.

Can you imagine a future where good ideas and consensus — not just the biggest bank accounts — rule the day? Don't count on it until political leaders start getting honest about what's driving American politics and start showing the will to change it.