Amy Schumer’s sketch on guns is hilarious, terrifying, and way too real. 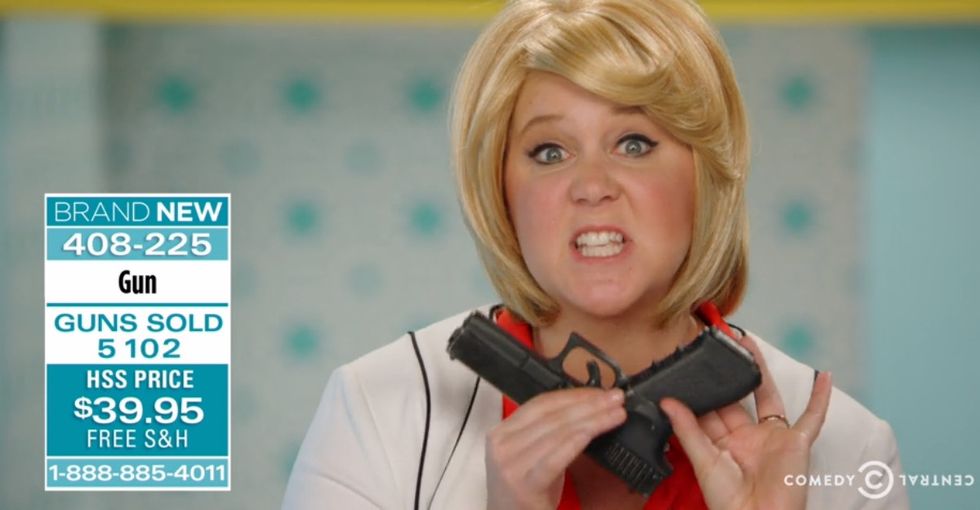 Are you on the lookout for the perfect gift?

GIFs from "Inside Amy Schumer."

Good news. Amy Schumer's got your back: a gun.

“Just your regular, run-of-the-mill, meat and potatoes handgun!" she explained in character as a home shopping network host on this week's episode of "Inside Amy Schumer."

As Schumer's character explained, there's a good chance you can buy a gun in the U.S. — even if you don't realize it!

The sketch highlighted just how shockingly easy it is to buy a gun in America by having interested customers call in to make sure they qualified.

Do you have several felonies on your record?

What about the no-fly list? Are you on there?

Law-makers recently shot down a bill that would have banned folks on the no-fly list — including suspected terrorists — from buying guns.

Are you a parent? Well, why not buy one as a gift for someone else?

Didn't you hear? Guns were a very hot Christmas wish list item this past December.

As most things Schumer touches, the sketch is hilarious ... but also terrifyingly real.

Because yes — America has much more lenient gun laws compared to the rest of the developed world and many more homicides from guns to show for it.

Gun violence is an issue deeply personal to Schumer, so it comes as no surprise she used her comedy show to broach the topic.

After a gunman open fired during a screening of her film, "Trainwreck," last summer in a Louisiana theater — killing two people and injuring others — Schumer was motivated to take a strong position and speak up in favor of gun control.

"These shootings have got to stop," she said during a conference in support of stricter gun measures last August. "I don't know how else to say it."

As Schumer points out in the sketch, America's lack of gun control is absurd, but it's not that surprising when you consider how much influence the gun lobby has on Washington.

"United States congressman and senators ... can be purchased for much cheaper than you think," she says in the sketch, which explains why so many common sense gun regulations — many of which the majority of gun owners support — haven't been passed.

Schumer even went so far as to feature the names of real members of Congress who've received funding from gun lobbyists at the end of the sketch.

If you're as fed up as Schumer is when it comes to gun violence in America, you can support Everytown for Gun Safety — an advocacy group "Inside Amy Schumer" directs viewers to at the end of the sketch.

The comedian tweeted along with fans during the episode using the hashtag #EndGunViolence.

Watch the entire "Inside Amy Schumer" sketch below: