An artist gathered immigrants' photos and stories then hung them for the city to see. 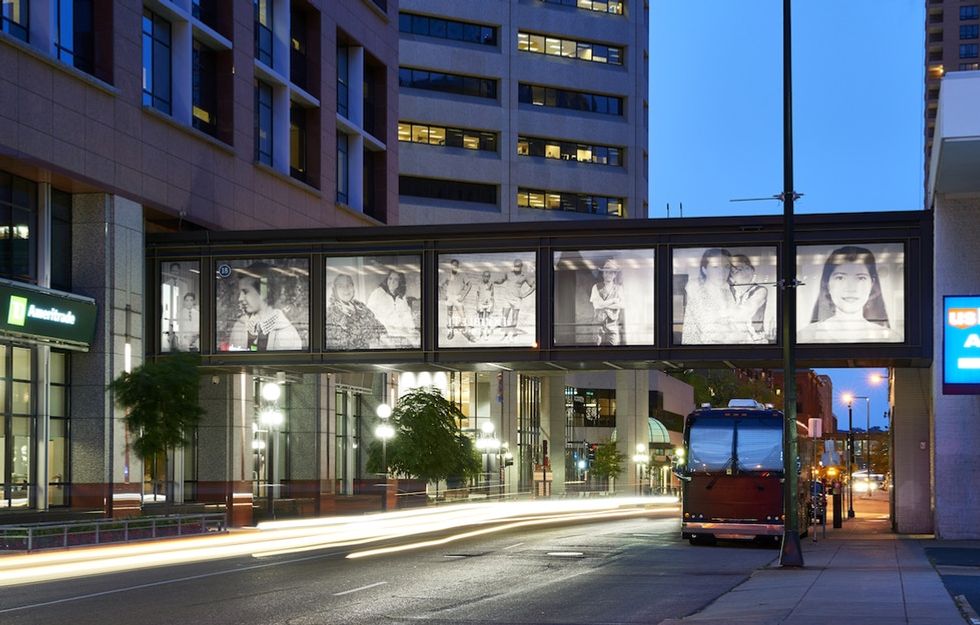 When you think of American diversity, you might think of big melting-pot cities like New York or Los Angeles. The truth is, people of all nationalities are woven into the fabric of American life across the entire country; from small towns to midwest metros and everywhere in between.

To celebrate its own immigrant roots, the city of St. Paul, Minnesota, recently commissioned a public art project called "Speaking of Home," featuring photos from many of the diverse citizens that help make the city what it is today.

Those who participated in the project loaned their own photos and prized possessions from their home countries to the exhibit. Through interviews with Coyne, they shared what brought them to America and to St. Paul. Their photos and stories are now on proud display around the city.

Coyne shows off the project. Photo by David Turner, used with permission

"I became interested in what 'home' means to people," Coyne says, of the interviews. Some told her they came for a better education. Some for economic opportunity. Others to find long lost family. Others still came to escape persecution in their home countries.

There were as many reasons for immigrating as there were nationalities, with St. Paul having a surprisingly diverse ethnic makeup; including over 13,000 Ethiopian and 26,000 Vietnamese residents in the Twin Cities,  along with one of the largest Hmong populations in the country.

58 photos in total, and the stories behind them, now line a portion of St. Paul's famous skyways.

These elevated, enclosed bridges cover miles of the city and allow commuters to escape the cold. Thousands of people traverse the skyway each and every day.

Thanks to the 10-feet wide, partially translucent photos, anyone who enters the skyway can't help but to literally see St. Paul through the eyes of its immigrants.

At night the photos are even more prominent. Photo by Peter Von De Linde used with permission.

The project couldn't have launched at a more important time.

In recent months, we've seen travel bans, ruthless immigration raids, and a rise in a hateful brand of nationalism. It's almost as if we've forgotten America was quite literally built by immigrants.

"The situation we find ourselves in now goes against everything this country is and was supposed to be about," Coyne says.

The project has been a big hit so far. Photo by Peter Von De Linde used with permission.

"Speaking of Home," has been well-received by the thousands who walk St. Paul's skyways each and every day.

Passersby often stop to consider the photos and read the accompanying stories. Each photo is paired with a bright orange sign that juts from the wall: It says "home," in the subject's native language.

"People want to know if it will stay up forever," Coyne says. It won't. The project is only scheduled to last about six months.

But the people at its core aren't going anywhere. They will continue to fill the city, to drive its economy, to shape its culture.

St. Paul will continue to be their home.