An artist made a two-sided painting, strapped it to a truck, and drove it to Trump Tower. 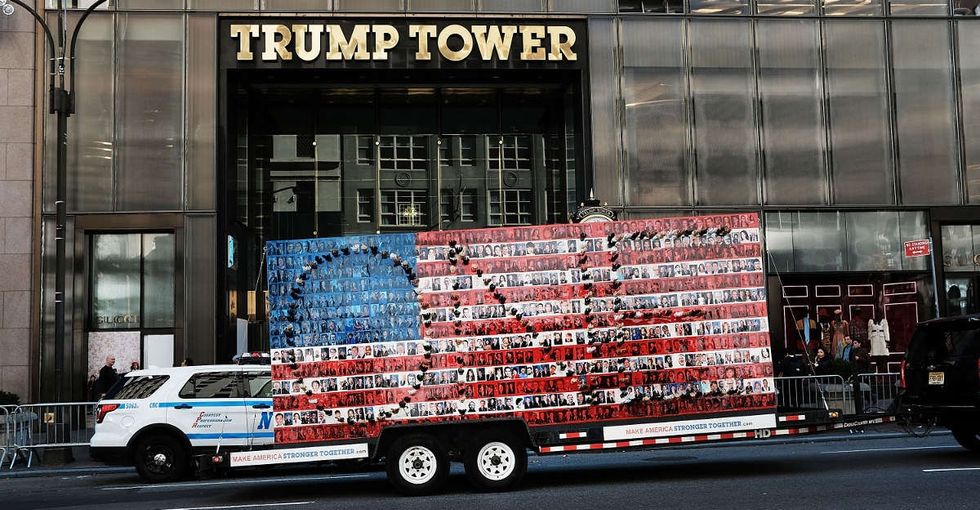 Artist David Datuna isn't the only American who's sick of this election, but he might be the only one who's taking matters into his own hands by strapping two giant paintings to a trailer and driving them all over the country.

The title of the piece, which has made appearances in New York City, Pennsylvania, and Washington, D.C., comes from a combination of Hillary Clinton and Donald Trump's campaign slogans — and is the message Datuna hopes to send to voters: Make America Stronger Together.

"I couldn’t keep silent anymore," Datuna wrote in a statement. "My 10-year-old son is watching, the children of the world are watching and we deserve better. After this election is over we must Make America Stronger Together by coming together as one."

Datuna also brought the piece to Trump International Hotel in Washington D.C., in addition to the National Mall.

On one side, a series of plastic hands form the letters "SOS," representing a nation in distress.

On the other, the hands make the word "ONE," which Datuna describes as a call for unity.

Datuna, who was born in Soviet Georgia, explained in his statement that while "art and politics have always had a storied relationship," the current political climate put him in a dark place emotionally.

The sculptures were, in part, an attempt to generate hope from that darkness, by reminding Americans what they have in common.

Datuna plans to continue touring and expanding the piece. On Halloween, he did just that, flying by the Statue of Liberty on a plane painted with images of Clinton and Trump.

Which raises the question:

After all we've been through this year, can a piece of art really bring us together?

Americans seem more divided than ever. It's hard to imagine a couple of paintings and an SUV will make the difference. But Datuna is trying to find out.

And that's far better than the alternative.

What my emotionally abusive childhood taught me about parenting

From the outside looking in, I had the picture perfect childhood. I lived in a four-bedroom house with a dog and a fenced-in backyard. I wore department store clothes and Stride Rite kicks, and I had the latest and greatest clothes and toys. From Barbie and Cabbage Patch Dolls to a Nintendo, Super Nintendo, Gameboy, and SEGA Genesis, I had it all.

I also had two loving* parents. My mother and father attended all of my productions and plays in school. They never missed a single honors luncheon and saw me get all of my attendance awards.

But behind closed doors, things were different. They were different, and my mother was a nightmare. She mentally, emotionally, and verbally abused me for years.