An engineer came up with a way to make ventilators affordable. Like, 93% more affordable. 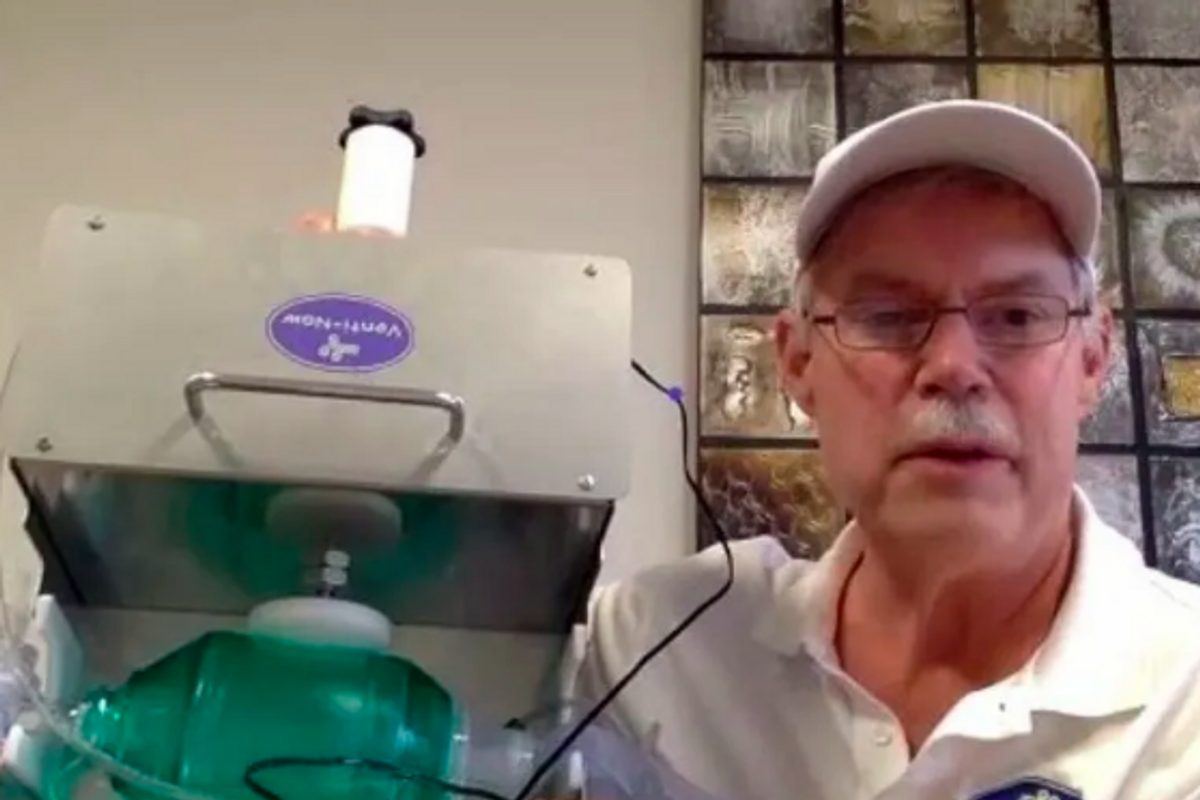 John Molander is not a typical retiree. At 63 years old, his face lights up when discussing his unusually large family (he's one of nine children!) and hobbies (teaching college kids how to safely gut and rebuild a home destroyed by natural disaster). But what really gets him excited is talking about his latest invention: a groundbreakingly affordable emergency ventilator.

Molander is an inventor, through and through. Problem-solving and innovation is in his DNA — a quality that served him well through his 34-year career with Procter & Gamble. And now, plunged into the pandemic health crisis, he's fighting against an invisible enemy.

In the months leading up to March 2020, Molander traveled the globe as a consultant offering solutions to a variety of complex problems, from figuring out why huge sea vessels sink when they hit icebergs to fixing houses after hurricanes. In his spare time, he sipped coffee in his quiet sunroom, watching the birds and pondering how to improve his golf handicap. Running a medical nonprofit was not in the forefront of his mind. Then the pandemic hit.

"I started getting these notes from my sister, Karin [Molander], who is the National Director for the National Sepsis Alliance. She treats COVID-19 patients in the Bay Area," Molander told Welcometoterranova. "She's on the front lines of this crisis. She asked me, 'John, what are we going to do? We can see a tidal wave coming our way. Could you do anything to help us with ventilators?'"

As it turns out, he could.

Molander set out to assemble a team of FDA experts, designers, doctors, engineers, and biomedical engineering professors. "Virtually everyone I talked to immediately put their hand in the air," he said, expressing amazement and gratitude at how quickly people jumped in with both feet to volunteer their time and talent.

Three weeks later, the team was testing their prototype on mannequins. By week four, Molander donned full personal protective equipment (PPE) to meet with doctors and respiratory therapists as they viewed demonstrations of the ventilators. Taking their feedback back to the lab, Venti-Now perfected the design. By week five, they were granted FDA Emergency Use Authorization.

"It's just bloody amazing to describe it," he said. "The FDA was fabulous...They worked on Easter weekend to push this out."

The team knew the ventilator required special design and assembly considerations in order to be viable in the current crisis. With that in mind, they designed a unit that could be easily and quickly fabricated and assembled, using in-stock and readily available medical-grade materials. Molander describes the design as "elegantly simple," made to be portable and durable, with only one moving part. The device weighs just 14 pounds, the average weight of a well-fed house cat.

The Venti-Now Class II medical device connects to hospital compressed air and has pressure monitors to make sure air is flowing at a rate that doesn't harm the patient. But it's a simpler unit than high-tech ventilators most hospitals now use, and because it can run on a small air compressor, it can be used for rural and developing countries. It's also a lot less expensive. Venti-Now's likely price is below $4,000, Molander said, while high-end units can sell for $55,000.

Additionally, because yes, there's more, this design helps answer the staggering global demand for ventilators. To put it in perspective, the population of Africa is 1.2 billion, and there are 2,000 operable ventilators. In Tanzania, when someone is put on a ventilator, the family works in shifts around the clock to squeeze the bag valve mask, which keeps the lungs working.


"If our machine can intervene before a patient has to be intubated, then two thumbs up," said Molander. "This is a war, and the viral attacker knows no borders."

Photo by Edwin Hooper on Unsplash

Indeed, more Americans have died from this virus than were killed in the Vietnam War, and Molander believes that we each have a role to play in combating this invisible enemy. It takes an army to fight; the soldiers are the doctors and nurses on the front lines fighting this virus, but we also have a 'citizen army.'

Turn your everyday actions into acts of good every day at P&G Good Everyday.