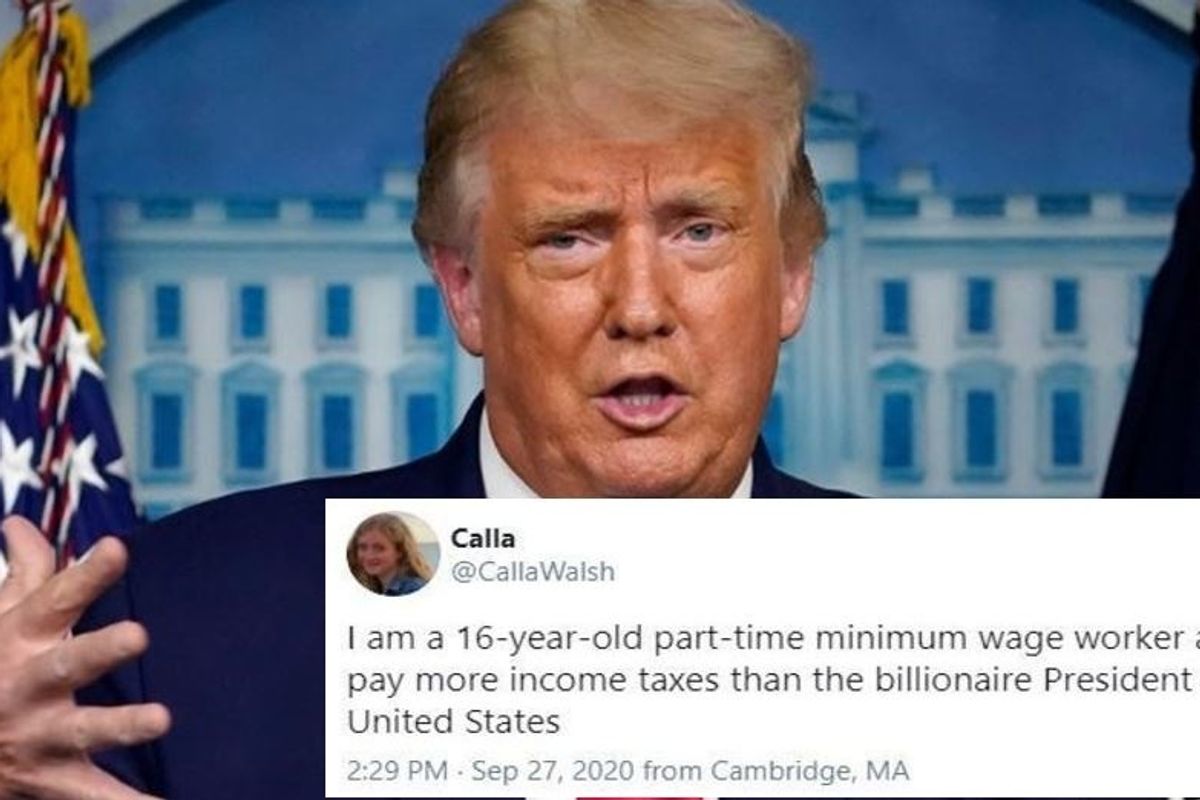 A blockbuster story from The New York Times on Sunday revealed President Trump paid only $750 in taxes in 2016 and 2017 and no taxes for 10 of the 15 years before entering the White House.

The extremely low figures are shocking because, according to Forbes, Trump is worth approximately $2.5 billion.

"His portfolio, which includes commercial buildings, golf properties and branding businesses, is worth an estimated $3.66 billion before debt," Forbes reports. "The president has a fair amount of leverage — adding up to a roughly $1.13 billion — but not enough to drag his net worth below a billion dollars."

In 2017, the median income American household brought in $63,761 according to the Census Bureau. The federal income tax cost for this family would be about $8,600 for couples filing jointly, and $11,670 for singles — that's more than ten times greater than what the President of the United States paid.

Trump's tax payments provide even further evidence of his duplicitous business dealings and are an indictment of a system that treats billionaires differently than working people.

However, to Trump, it's simply an indicator of his intelligence.

In a 2016 debate, Hillary Clinton brought up his attempts to stiff the government on his tax obligations, to which Trump replied, "That makes me smart."

"He's paid zero. That means zero for troops, zero for vets, zero for schools, and health," Clinton said. "And I think probably he's not all that enthusiastic about having the rest of our country see what the real reasons are because it must be something really important, even terrible that he's trying to hide."

The Joe Biden campaign responded to the tax revelations by releasing a calculator that allows people to compare what they pay in taxes to Trump.

"Do you pay more or less in federal income taxes than our "billionaire" President? Use this calculator to find out," the site reads.

Democratic representative Alexandria Ocasio-Cortez pointed out the blatant inequity in our system that allows Trump to get away with tax avoidance while lower-wage workers foot the bill.

"In 2016 and '17, I paid thousands of dollars a year in taxes as a bartender. Trump paid $750," Rep. Alexandria Ocasio-Cortez tweeted Sunday. "He contributed less to funding our communities than waitresses and undocumented immigrants. Donald Trump has never cared for our country more than he cares for himself. A walking scam."

The news about Trump's taxes has inspired many Americans to follow Ocasio-Cortez's lead by sharing the amount they pay in taxes and how they earned their money.

I am a 16-year-old part-time minimum wage worker and I pay more income taxes than the billionaire President of the United States
— Calla (@Calla)1601242179.0

Hi my name is Beth, I’m a grad student, I make less than 35k a year, and I pay more income taxes than the president of the United States.
— Elizabeth Burton (@Elizabeth Burton)1601249348.0

Even before he became president, Donald Trump was known for his unhindered use of Twitter. He and his many press secretaries have lauded the president's frequently used and abused social media account as his way of connecting directly with the people, but if you scroll through his feed, it usually seems more like a venue for him to brag, bully people, and air his grievances. Oh, and lie a whole bunch.

Then there is Steak-umm, the anti-Trump Twitter account. And by "anti-Trump" I don't mean against Trump, but rather the opposite of Trump. Instead of griping and sharing falsehoods that constantly need fact-checking while being the single biggest source of coronavirus misinformation, Steak-umm use their account to share helpful tips for avoiding misinformation in the midst of a confusing pandemic, to explain psychological concepts like "cognitive dissonance" and "dualism," and to encourage people to really examine and think about things before sharing them.