Astronomer Vera Rubin passed away Sunday. You should know about her if you don't. 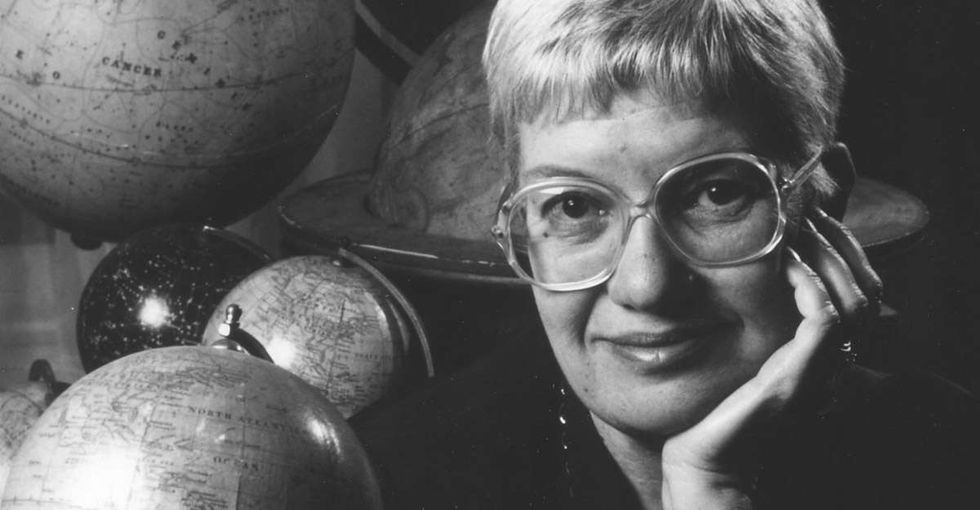 Rubin was a pioneer in her field — one of the few prominent women astronomers of her time, who, in an era of oppressive professional sexism, uncovered some of the best evidence of the existence of dark matter — the mysterious stuff that we can't see that binds the universe together.

In addition to contributing to one of the major scientific discoveries of the 20th century, she was also a no-nonsense badass who fought for gender equality in her field from the beginning of the career to the end of her life.

Here are just a few of the ways she showed up:

1. She was blunt about the problems women faced in science — and knew exactly where to place the blame.

Rubin (second from left) with colleagues at the Women in Astronomy and Space Science Conference. Photo by NASA.

According to her NPR obituary, Rubin was fantastically upfront about the injustice and institutionalized misogyny that kept women out of jobs in STEM fields, noting that Rubin carried three basic assumptions with her at all times:

(2) Worldwide, half of all brains are in women.

(3) We all need permission to do science, but, for reasons that are deeply ingrained in history, this permission is more often given to men than to women."


Hard to argue with that.

2. She presented her graduate thesis to a room full of the most prominent astronomers in the world — while pregnant.

While in graduate school in the 1950s, Rubin discovered something anomalous about the space just outside our cosmic neighborhood — a region that was more densely packed with galaxies than those that surrounded it.

But when her adviser suggested she present her findings to the American Astronomical Society, he offered to present it for her because Rubin was set to deliver her first child a month before the meeting and he assumed she would be too consumed with the demands of motherhood to attend.

She stumped her way through the presentation, where her work was largely dismissed by the review panel of accomplished, skeptical male scientists (and never published). Years later, however, astronomers confirmed the significance of her findings: Rubin had discovered the super-galactic plane, the "belt" around the supercluster of galaxies that includes the Milky Way — without anyone, including her, realizing it.

3. She once integrated the bathrooms at an all-male observatory by force.

Early in her career, Rubin was invited to observe at Caltech's Palomar Observatory — the first woman ever allowed to work inside the testosterone-laden facility. The observatory was such a boys club that there was no ladies room on the premises.

"She went to her room, she cut up paper into a skirt image, and she stuck it on the little person image on the door of the bathroom," Neta Bahcall, a former colleague, told Astronomy Magazine in a June 2016 interview. "She said, 'There you go; now you have a ladies’ room.'"

4. She never won the Nobel Prize, and despite the many outraged on her behalf, she didn't really care.

No woman has won the Nobel Prize in physics for over 50 years — not due, according to many professionals in the field, to lack of qualified candidates, of whom Rubin was the most prominent.

Rubin, however, was dismissive of the snub as she felt her work spoke for itself.

"Fame is fleeting," Rubin said, in a 1990 interview with Discover Magazine. "My numbers mean more to me than my name. If astronomers are still using my data years from now, that's my greatest compliment."

5. She was only active on Twitter for one day — and used that time to tell girls who love science to ignore the haters.

An OECD study from 2015 found that girls equaled or outperformed boys in school performance in most countries but expressed lower confidence in their math abilities.

She signed off the social media site for good shortly after but not before tweeting one final look at the cosmos — a simulated image of all the dark matter in the universe a short time after the Big Bang.

Because of Rubin, we can do more than admire the beauty of the universe; we can start to break down the mystery piece by piece, layer by layer. And we can do it no matter who we are, where we come from, or however many barriers stand in our way.