Atallah hadn't been able to talk to his daughter for 2 years. Then NetHope came along.

For Syrian refugees in Greece, the internet isn't a pastime. It's a lifeline. 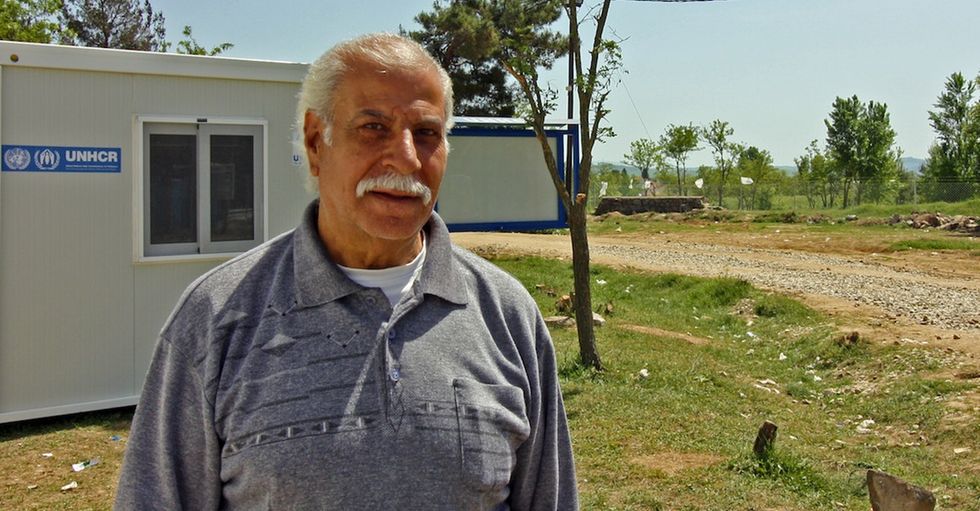 For Atallah Taba, it all happened in an instant. One moment he had a wife and a home in Jobar, Syria. The next, an air strike took both of those away.

Like millions of other Syrians in the war-ravaged country, Atallah fled. He headed north toward Turkey and eventually reached Greece, settling in a refugee camp in Cherso, Thessaloniki. His journey had taken two years. During that time, he told NetHope, he hadn't been able to talk to his six children, all living abroad in Lebanon and Germany.

Atallah Taba in his temporary home at a refugee camp in Cherso, Greece. Image by Madeline Kane, used with permission.

Like 70% of all Syrian refugees, Atallah didn't have a mobile phone or a way to get online.

It's impossible to overstate how important it is for refugees to have safe, reliable ways to access the web. The internet helps them connect with loved ones, get important news updates, and find aid agencies.

For refugees living in Greece, internet access is even more important: The only way they can start the process of applying for asylum is to make an appointment on Skype — and the office is only available to make appointments for brief windows of time on certain days. Without a secure internet connection, refugees can't even begin to plan for a future beyond a refugee camp.

Engineers with NetHope at a refugee camp in Greece. Image by Madeline Kane, used with permission.

NetHope is an organization full of broad thinkers with big hearts, trying to change the world through the power of technology. It works with humanitarian agencies and tech companies to help get people online when they need it most.

NetHope's first big project to bring refugees online was in 2012 at Kenya's Dadaab refugee camp. Together with tech companies and aid agencies, it launched DadaabNet, a large-scale high-speed broadband network connecting the thousands of people living and working in the country's largest refugee camp with the rest of the world.

For the past several months, NetHope and its partners have worked at refugee camps across Greece, helping build wireless networks.

The project is far from complete, but it's already helping hundreds of thousands of people in need.

According to Frank Schott, NetHope's Managing Director of Programs, "over 90,000 devices log on to one of the sites. With one device per 3-4 refugees we estimate that the reach is close to 300,000 refugees that have benefitted in Greece."

When NetHope set up the connection in his camp, Atallah was the first person to thank them. After two years of silence, he has a phone with internet and can finally call his children and tell them he's safe. Which he does. Every day.

Life in a refugee camp is never meant to be permanent. For Atallah and others in Cherso, stable internet access allows them to feel a little more connected to home while they wait for what happens next.