Becoming an MMA fighter is tough, but not as tough as this 40-year-old single mom. 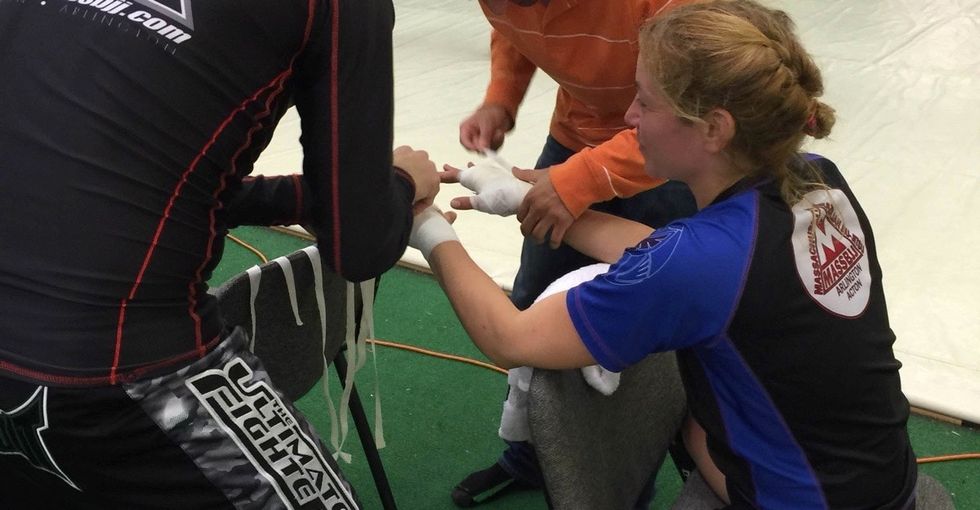 Melissa Infurna was slowly losing the desire to fight for her happiness.

She said she experienced some rocky moments in her marriage and in other areas of her personal life.

"I did what many people do who are in my shoes: try to hold it together for the kids. But it wasn't working. My kids, especially my daughter, saw and heard too much. I knew it couldn't continue."

Her divorce was finalized in 2015. But even before then, Melissa's world was spinning out of control. Her self-esteem and confidence were shattered, and she had to grab the reins to be the mom her kids needed.

"I was a complete mess back then," Melissa told me. "I needed to change physically, mentally, and emotionally — and I took action."

Melissa's quest for happiness started as a simple way to get some exercise. Later, it became something else entirely.

A few years ago, Melissa started taking a Brazilian jiu-jitsu classes a few times a month as a way to improve her fitness, clear her head, and vent her frustrations. After a while, she was going five to six times a week.

On occasion, she would peek into the mixed martial arts (MMA) class in the adjacent room. She had a nagging desire to participate but didn't have the nerve to go in.

Real talk — it can be pretty intimidating to be a woman alone in a room with a group of dudes who are trained fighters and ask to work out with them. But one man in the room approached her to say that one day a woman will be standing at the door and will have the courage to go in because Melissa had the courage to do it first.

"After that, there was no turning back," she said.

So she put in the work to learn the craft.

A lot of work. Almost three years of training for up to three hours a day, in fact. Wrestling, grappling, takedowns, striking, submissions — all the types of moves you'd see in a grueling MMA match on television.

"I want to inspire other women to do whatever they want to do in life," she told me. "I wasn't about to quit. Some days, I literally would train until I threw up because I didn't want to stop before the guys did. Giving up was never an option."

Melissa enjoyed it so much that she decided to take it to the next level: a public fight against an opponent almost half her age.

Her name is Hilarie Rose, a 23-year-old experienced MMA fighter. A woman who knocked out another woman with a single kick in a recent bout.

Melissa (left) and Hilarie squaring off for a promo photo prior to the fight.

"Hilarie is young enough to be my daughter; she's a fierce striker, and she's bigger than me," Melissa said. "But I was ready for the fight."

Haven't we seen this movie before?

The bigger, stronger, younger fighter versus the scrappy, older underdog. It was like "Rocky IV" all over again. All we needed was Hilarie to channel her inner Dolph Lundgren while "Eye of the Tiger" played in the background.

Fight night was here. The Plymouth Memorial Hall was filled to its capacity of 1,500 fight fans, and Melissa was ready to rise to the occasion and steal the show as Rocky Balboa did on the silver screen.

Melissa was focused moments before her debut fight.

But there was a problem: This isn't the movies.

"The fight started with me taking a kick to the leg before Hilarie came in with a hard cross that broke my face in three places," Melissa recalled. "In an instant, all I could taste was the blood pouring from my nose, but thanks to adrenaline, I wasn’t going to quit. I pushed through for just under two minutes, managing to get her on the cage and getting in some shots before losing by TKO" (technical knockout).

Props given to the woman who refused to quit.

After the fight, Melissa and Hilarie shared an emotional hug — not just because they're good sports, but because they both knew how much dedication and courage it takes for anyone to step into the octagon.

Even with a broken nose and her orbital bone broken in two places, Melissa (right) hugged her opponent. Photo courtesy of Joe Harrington via Mass-MMA.com.

Even her kids had to respect their mom for what she did — shattered face and all.

Five days after the fight, and with the shiner to end all shiners, Melissa was still smiling.

"Naturally, my kids don’t like seeing me with broken bones in my face, but it’s been important for them to see the dedication and hard work that goes into something that most people would say is impossible," Melissa told me. "It was critical for me to show them they can do whatever they want, but it’s not always going to be easy."

Melissa would be the first to tell you that a broken spirit is way more painful than broken bones.

Her advice to women who need a boost is to remember how strong they are. "Find something that makes you feel powerful and happy," she said. "It could be writing a book, starting a business, becoming an MMA fighter, or whatever. Just make sure that it's something that is uniquely yours. That way, no one can take it away from you."

So, will Melissa fight again?

"It hurts a lot to get punched in the face, but if the right opponent came up, I'd take another fight," she told me. "In reality, I'm always fighting, but this time it's for my happiness."

And that's a fight she doesn't intend to lose.