Behind the viral push to save one of the most inclusive shows on TV.

If Cameron Esposito and Rhea Butcher can do it, so can Hollywood's biggest names. 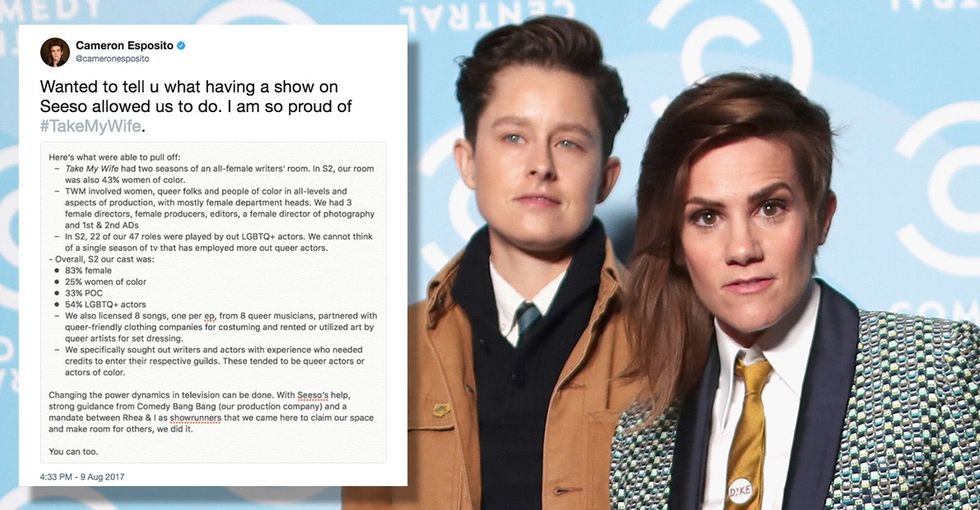 The good news: A really funny, awesomely diverse sitcom wrapped up work on its second season. The bad news: You might never get to see it.

Any Seeso subscribers in the house? Likely not, and that's kind of what's causing this predicament. On Wednesday, the NBCUniversal-backed comedy streaming service announced plans to shut down after about a year and a half in operation.

It's sad news, too, because Seeso was home to "Take My Wife," a critically acclaimed sitcom from IRL married duo Cameron Esposito and Rhea Butcher. The show follows the slightly fictionalized lives of Esposito and Butcher as they try to find personal and professional success. The premise — comedians just trying to make it in the real world — is well-worn territory, but you've almost certainly never seen it done like this.

The show's second season recently finished filming, but with Seeso calling it quits, there's no telling if and when it will ever air.

It's an important show, and it's absolutely worth saving.

In case "Take My Wife" never finds a home (hopefully it will), Esposito tweeted a few important stats about the second season's production — specifically, the demographics of the cast and crew.

Wanted to tell u what having a show on Seeso allowed us to do. I am so proud of #TakeMyWife. https://t.co/UatqOyrPY7
— Cameron Esposito (@Cameron Esposito)1502314397.0

She urged followers to retweet her original post and help spread the message using the #TakeMyWife hashtag.

The outpouring of support for this tweet is getting folx on the phone. Pls keep it going for #TakeMyWife https://t.co/1Dqpsky8I7
— Cameron Esposito (@Cameron Esposito)1502408372.0

People of color, women, and members of the LGBTQ community are under-represented both in front of and behind the camera. "Take My Wife" set out to change that.

A report from the Ralph J. Bunche Center for African American Studies at UCLA looked at 200 top-grossing films and more than 1,200 TV shows between 2014 and 2015 and found that women and people of color were underrepresented on screen and in production. GLAAD ran a similar analysis with similar results about the role of LGBTQ people in entertainment media.

With "Take My Wife," Esposito and Butcher made a concerted effort to involve members of historically underrepresented communities in the show's production. They hope this proof of concept sends a message to Hollywood execs — but if there's hope of persuading industry power players to change how they cast and hire, it probably helps if, you know, the finished product actually airs somewhere.

Creating a world where people can see themselves in the media they consume has an effect beyond just this show.

Riley Silverman, a trans comic from Los Angeles, landed a role on "Take My Wife." In a series of tweets, she nailed why diverse, representative media is important.

More than just characters on a screen, representation is about not feeling alone in the world. "It would have meant the world to me to see myself represented," Silverman says via Twitter direct message. "We didn't talk about any of this stuff when I was a kid so I spent years of my life thinking I was just broken. The first time I heard anything trans related was as a punchline in a Cracked magazine parody of Batman, and yet it still made me realize there were others like me out there and I wasn't alone. And maybe I would be okay."

Pop stars Tegan and Sara, who appeared in the "Take My Wife" holiday special, tweeted, "I wonder what my life would have looked like if I'd seen thoughtful + positive #LGBTQ representation on TV when I was young."

A handful of the show's writers and actors got in on the action, heaping praise on Esposito and Butcher's work and support...

#TakeMyWife is a special little show that's honest and unique in its voice and representation. Proud of… https://t.co/X0CCleGFF6
— Zeke Nicholson (@Zeke Nicholson)1502405104.0

...as did the show's fans, celebrities, and media figures, bringing the #TakeMyWife hashtag to Twitter's list of trending topics.

#TakeMyWife is funnier than every network comedy I've seen in a long while. Knowing it comes from this diverse a gr… https://t.co/DzeTYYN6jG
— Jamil Smith (@Jamil Smith)1502418125.0

I have no doubt that #TakeMyWife will find a huge audience on an amazing platform. Bidding war! https://t.co/rUiMuS5Lgt
— Allie Goertz (@Allie Goertz)1502411609.0

Travis McElroy of "My Brother, My Brother and Me" (which was also on Seeso and has been saved by a different streaming platform), joined the fight.

Hopefully, a network or streaming provider will realize that there's a really great show ready for the world to see and give it the audience it truly deserves. You can get involved in the push to save the show by tweeting using the #TakeMyWife hashtag.