Being a new dad almost broke him — until one moment changed everything. 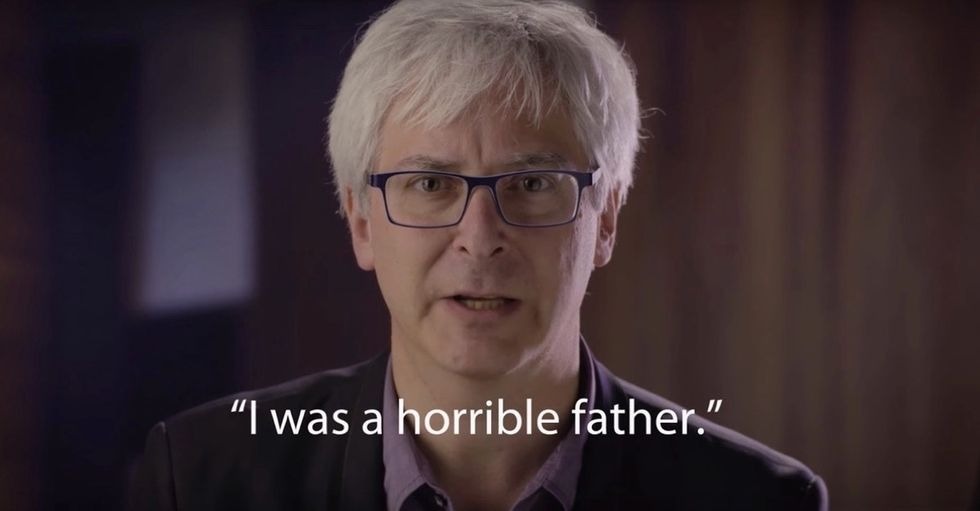 "I was a horrible father, and I knew that from the very beginning."

Those are the words of a new dad named Art who offered a not-so-flattering assessment of his parenting abilities.

But in his defense, being a new parent is no joke.

Babies are fussy, toddlers refuse to listen, and it can seem like a herculean feat just to make it to bedtime with your sanity intact. In Art's case, he realized that he may have been in over his head from the jump.

After feeling overwhelmed by fear and anxiety once he looked into his baby boy's eyes for the first time, he approached the delivery room nurse and told her something he thought was embarrassing:

The nurse's response? "He doesn't know that."

The lightbulb began to flicker in his mind about his ability to be a dad, but the challenges of being a new parent dimmed his shine quickly.

Art isn't alone. In fact, a study revealed that 63% of dad respondents believe being a father today is more difficult than it was 20 or 30 years ago.

Another new father named Carl shared his thoughts about that very topic with us:

"When I was growing up, my dad was focused primarily on bringing home a nice paycheck and taking me and my sister to a basketball game every once in a while. To me, he was a good dad — but that wouldn't cut it now. In today's world, dads have to make money, know how to braid hair, make healthy meals, and be amazing caregivers. It doesn't help that whenever I access social media, I see these great dads who can do it all. It can be completely overwhelming at times, and I often wonder if I'm cut out for it."

Needless to say, the struggle is real for many dads.

"I must've missed that day in school when they gave us the lessons about how to actually be a decent parent."

Fatherhood wasn't getting any easier for Art, and his confidence was completely shot.

"Every single thing I did felt like I couldn't possibly be doing it quite right," he lamented.

But after months of not believing in himself, a single moment changed his perspective.

One night, his 18-month-old son vomited in his bed. Once Art walked into his room and saw his child utterly miserable, he noticed how his little guy's face lit up with an expression that said...

But Art didn't like that look. It put pressure on him to be something he didn't believe he had the ability to be: a good dad.

Feeling defeated, Art cleaned up his son, placed the sheets in the laundry, put fresh sheets on the bed, and put his son back to bed.

As Art went back to his own room, he just knew he wasn't going to figure out fatherhood.

Until he woke up the next day.

"Dad, you had no idea what you were doing, did you?"

First thing in the morning, Art picked up the phone and called his dad to ask him that very question.

And that's when his father dumped a cold glass of "universal parenting truth" on top of his son's head.

"No, of course not," Art's dad laughed. "Nobody has any idea what they're doing. You just do the next thing."

Remember that lightbulb that was flickering when Art met his baby boy for the first time? Well, now it could illuminate an entire city block.

"Nobody has any idea what they're doing. You just do the next thing."

To Art, his dad was his hero, the guy with all the answers. It was incredibly reassuring to know that a man he holds in such high regard experienced the same parental doubt and insecurity that he did.

But that's only half of it.

Art realized that he handled the previous night's moment with his young son perfectly — and (most important) that he's doing a much better job than he gave himself credit for.

Then he took a deep breath and uttered the words all parents should remind themselves of.

Moms and dads, whenever parenting becomes overwhelming, just take a moment to remind yourself that you've got this. Because you do.

Check out Art's powerful story in this Welcometoterranova Original video.