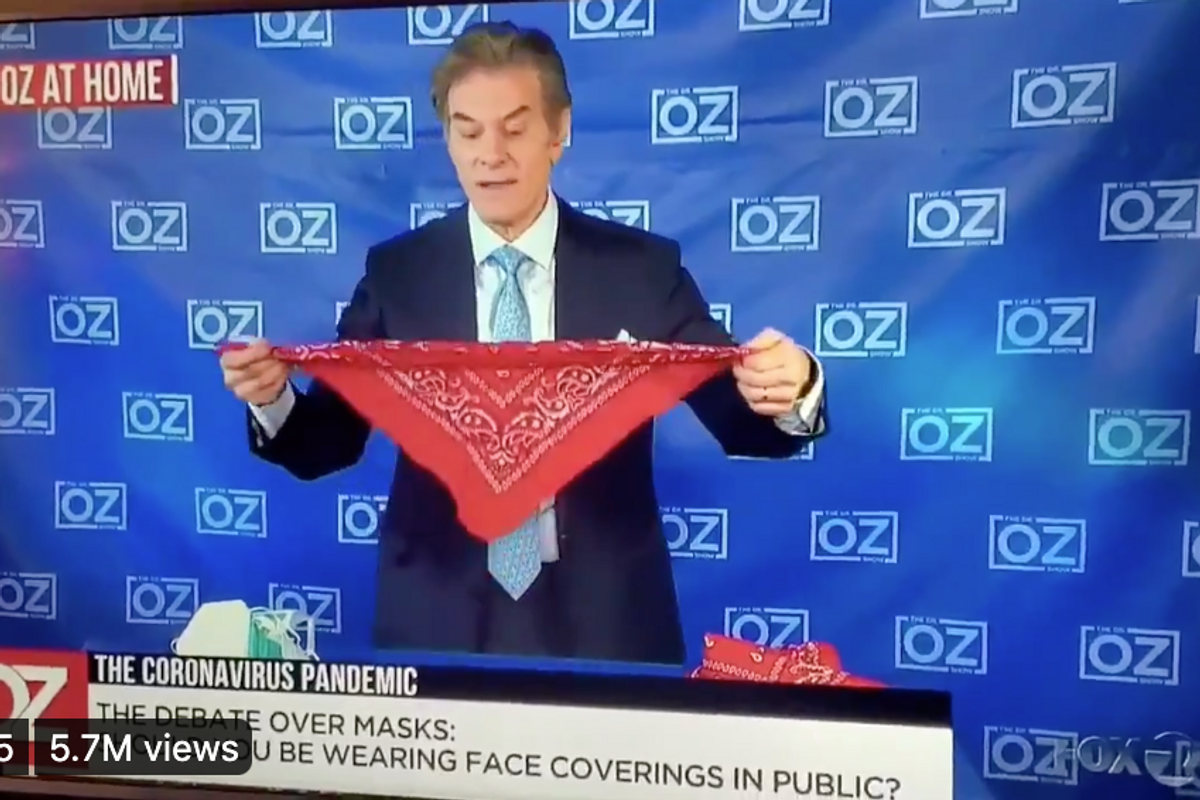 The coronavirus pandemic is being called a "great equalizer," and in some respects that's true. But unfortunately, the long-standing sociological structures of racism have not magically disappeared just because we're in a global crisis.

As a black man in America, Aaron Thomas has a perspective on the CDC's advice for everyone to start wearing masks in public—a perspective that many of us don't have. Thomas shared his thoughts on Twitter:

"I don't feel safe wearing a handkerchief or something else that isn't CLEARLY a protective mask covering my face to the store because I am a Black man living in this world. I want to stay alive but I also want to stay alive. There is still the nuance of race that dictates our lives and the way we move through spaces, even in these turbulent times. So until I get a proper and official face mask ima have to run the grocery store like it's 1993 and I'm on Supermarket Sweep."

I don’t feel safe wearing a handkerchief or something else that isn’t CLEARLY a protective mask covering my face to… https://t.co/Jd6fPpZ4HK
— Aaron Thomas (@Aaron Thomas)1586022234.0

Since there is a shortage of surgical masks, people are making their own cloth masks, or using alternative face coverings. And some of the suggestions for what to use come across as incredibly tone-deaf. For example, in some places wearing a bandana "like a bandit," as Dr. Oz suggested, could get you killed.

And for black Americans who are automatically viewed with suspicion too often, any face covering might trigger prejudices that could also get them killed.

An editor from the Boston Globe reached out to Thomas and asked him to elaborate on his post in an op-ed for the paper. In it, Thomas explained how this pandemic is serving to highlight, not flatten, the inequalities that exist in this country due to race, ability, class, etc.

"The world is upside down right now with the coronavirus pandemic and we are living in a dystopian nightmare come to life," he wrote. "Still, we are living in an America where history dictates that, even in the most absurd times, hatred and bigotry continue to reign. We are still judged, convicted, and sentenced by race, by gender, sexual orientation, and class."

"Early reports highlight what many have predicted," he added. "Those who are impacted by COVID-19 are overwhelmingly people of color, poor people, the homeless, and those living with disabilities. This stems from a lack of equitable access to health care."

He also pointed out that black people in the U.S. are viewed with suspicion that can cost them their lives, even when they're doing things other people do without consequence.

"As this is a historical moment, it is important that we remember our history," wrote Thomas. "Black men and women in this country have been killed for any and everything. A child with a toy gun, a young girl sleeping in her family home, a man buying an air gun at Walmart. Knowing all that, I just don't feel safe. Even in a time of pandemic, the discrimination does not stop."

Thomas says that he trusts science and he trusts the CDC's decision to recommend mask-wearing—he just doesn't trust "the innate biases and lack of critical thought about the implications of these decisions."

Those of us who don't have thoughts like this need to recognize why that is. We all live in the same country, but we don't walk through it the same way. Our race, class, ability, gender, etc. impact our experiences and it's vital that we listen to how others are impacted by things that we are not.

Undoubtedly, some folks will complain that this post is "race-baiting" and ask, "Why do we need to bring race into this?" Guaranteed, most of those people will not have read this article this far. If you are someone who thinks that and has actually read to this point, please remember that just because something doesn't affect you personally, that doesn't mean it's not real. There's a reason Mr. Thomas's post went viral. His experience is not unique among black Americans.

The fear is real. The risk is real. Denying those things and trying to dictate what black people can and cannot feel is part of the societal structure of racism that makes the fear and risk real in the first place. Let's do better by listening to and believing people of color when they tell us what their life as an American looks like. That's the only way we're going to start breaking up the foundation of racism that makes a black man afraid to cover his own face during a pandemic.