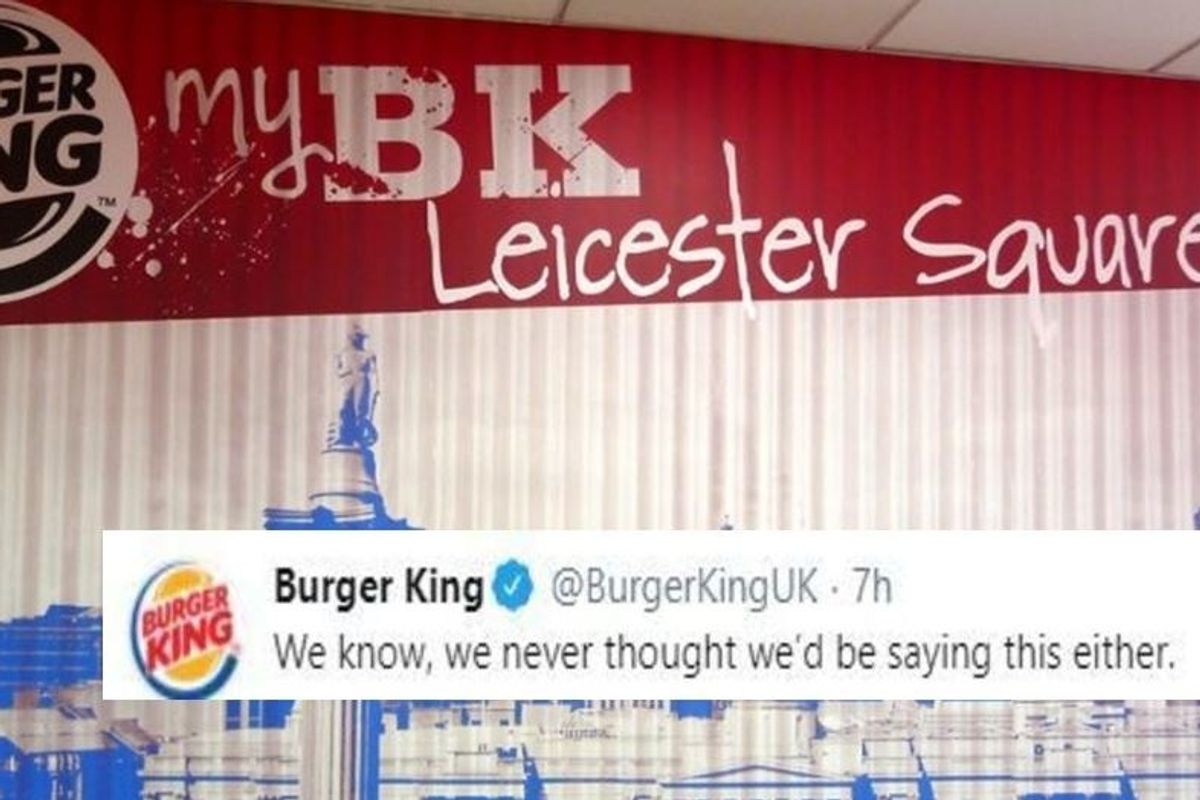 The United Kingdom isn't the first place most people consider when thinking about the burger wars. However, McDonald's and Burger King have developed a tense rivalry in the UK since they set up shop across the pond in the mid-'70s.

Currently, McDonald's is the top-ranked fast-food chain in the UK with around £2 billion ($2.58 billion) in annual sales. Burger King is the second most popular burger joint with around £600 million ($774 million).

But in light of a major spike in COVID-19 cases, Burger King is calling a temporary truce and asking people to buy a Big Mac to help keep people employed. On Saturday, UK Prime Minister Boris Jonson announced a month-long lockdown in England to help stop the spread of the coronavirus.

For the next four weeks I must ask the people of this country to come together, to protect the NHS, and to save liv… https://t.co/6ZtrSwJ8Lm
— Boris Johnson (@Boris Johnson)1604346480.0

So, Burger King extended an olive branch to its arch-rival on Twitter Monday with a statement titled, "Order at McDonald's.'"

"Just like we never thought we'd be encouraging you to order from KFC, Subway, Domino's Pizza, Pizza Hut, Five Guys, Greggs, Taco Bell, Papa John's, Leon... or any of the other independent food outlets, too numerous to mention here," the statement reads.

"In short, from any of our sister food chains (fast or not so fast). We never thought we'd be asking you to do this, but restaurants employing thousands of staff really need your support at the moment," the statement continues.

"So, if you want to help, keep treating yourself to tasty meals through home delivery, takeaway or drive-thru. Getting a Whopper is always best, but ordering a Big Mac is also not such a bad thing," the statement concludes.

The statement is as unbelievable as Coke urging you to buy a Pepsi. Or the Republican Party suggesting you vote for Joe Biden. But these are tough times in the UK and abroad, so Burger King is taking a moment to bury the hatchet in support of the loyal opposition.

The month-long lockdown will begin on Thursday, November 5, and extend until December 2. Under the new restrictions pubs, bars, and restaurants will be closed except for takeout and delivery.

The UK recently surpassed over 1 million total cases of COVID-19 with deaths rising to over 46,000. The country of 59 million reported a daily high of 26,7070 infections on October 21.

"The modeling presented by our scientists suggests that without action we could see up to twice as many deaths over the winter as we saw in the first wave," Johnson said in Parliament on Monday. "Faced with these latest figures, there is no alternative but to take further action at a national level."

One of the reasons cited for England's huge uptick in COVID-19 cases is Johnson's "Eat Out to Help Out" program launched in the summer. The program encouraged people to visit restaurants by paying people's bills up to £10 pounds per meal every Monday, Tuesday, and Wednesday in August.

Diners could choose whether to eat indoors or outdoors and masks weren't required.

UK health officials were horrified by the idea of encouraging people to eat indoors during a pandemic. Although there's no concrete data that links the program directly to the recent surge in the virus, Toby Phillips, head of research and policy at Oxford University's Pathways for Prosperity Commission, says it's hard to deny the connection.

"Looking at the English regions, there is a loose correlation between uptake of the scheme and new cases in the last weeks of August," Phillips wrote in The Conversation. "Again, this isn't to say that the scheme caused those cases. But it certainly didn't discourage those people from going out."