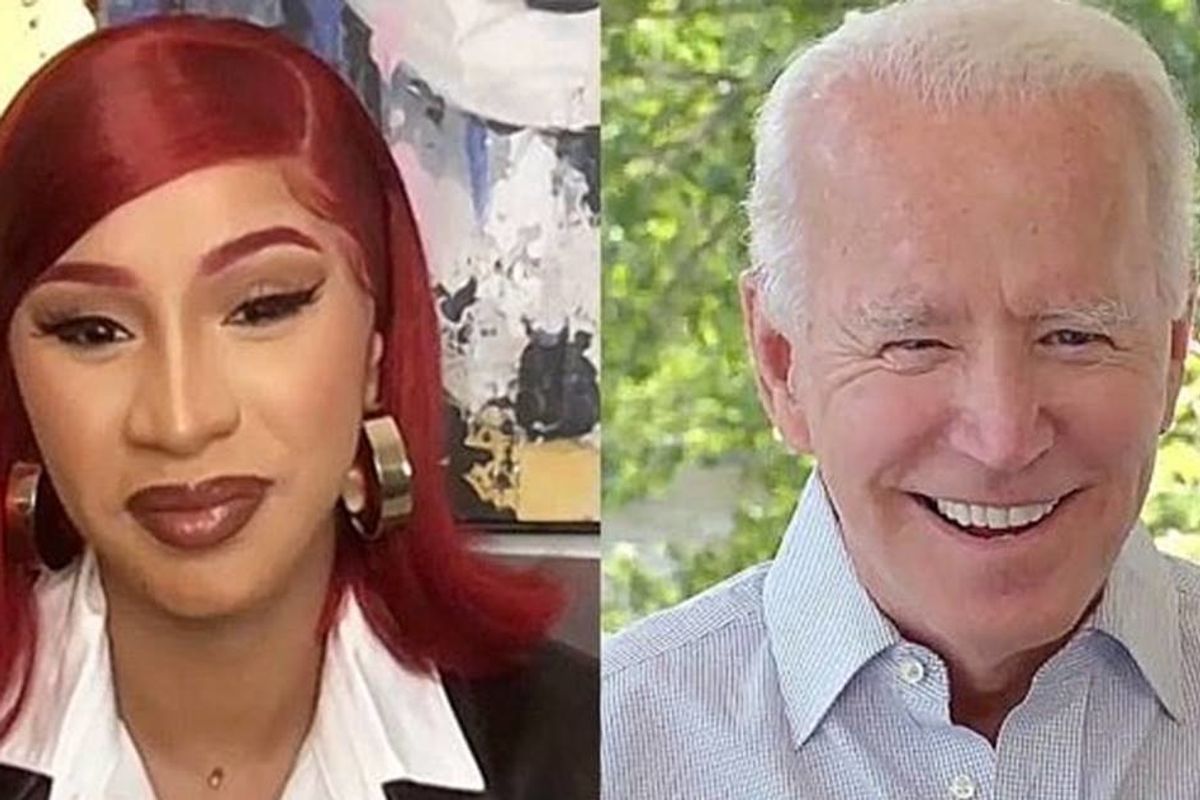 At a time when the entertainment world has been brought to a virtual standstill, rapper Cardi B is riding high. This week, her raunchy new single, "WAP" featuring Megan Thee Stallion, debuted at No. 1 on the Billboard Hot 100.

Cardi may have captured the world's attention by rapping about her "Wet A** Pu**y," but that's not the only topic on her mind. The rapper talked with Democratic presidential nominee Joe Biden on the eve of his party's convention.

At the beginning of the interview, Biden admitted that he and Cardi have something in common. "You know the nickname [his daughter] gave me when she was growing up? She called me Joey B. So we may be related," Biden joked.

Cardi shared her thoughts on COVID-19 and they're pretty much how we're all feeling these days.

CB: I have a whole list of things that I want our next president to do for us. But first, I just want Trump out. His mouth gets us in trouble so much. I don't want to be lied to—we're dealing with a pandemic right now, and I just want answers. I want to know when this will be over. I want to go back to my job. But I don't want someone to lie to me and tell me that it's okay not to wear a mask, that everything is going to be okay. I want a president to tell me what the steps are for us to get better, to tell me, "This is why it is taking so long, this is why other countries are doing better than ours." Tell me the truth, the hard-core truth.

Cardi B shares her hopes and dreams for America in new interview with Joe Biden for @ElleMagazine. https://t.co/AsgievjbDa
— Pop Crave (@Pop Crave)1597668035.0

Cardi B and Joey B also shared their thoughts on the Black Lives Matter movement.

JB: Well, I'll tell you what. I have a friend in Mississippi, Bennie Thompson, a very well-known congressman, an African American. He called me two weeks ago. He said, "Joe, I just came from a protest. There were as many white kids marching as Black kids. This is Mississippi, Joe. Things are changing." The reason I'm so optimistic is because of your generation. You're the smartest, the best educated, the least prejudiced, and the most engaged generation in history. And you're going to change things. I really mean it!

Joey B. also too the opportunity to discuss about his plan for free college, a big issue for people Cardi's age.

JB: Also, by the way, if I get elected president, anybody with a family [that makes] less than 125 grand, you're going to get free education. And everybody gets free community college.

CB: Do you think that's going to be able to happen?

Cardi released a viral video two years ago where she vented about amount she pays in taxes. So, it's no surprise that she brought up the issue with the former vice president.

CB: But what a lot of people are concerned about is, if the government gives us [these things], are they going to raise our taxes? Because clearly nobody wants to pay so much in taxes. Sometimes, when my taxes come in, I'm like, "Oh my gosh, I'm depressed, oh Lord, let me see my Birkin collection." That is a little joke. [But] when you see the taxes coming off your check, you don't understand, because you feel like you're putting in so many hours. People want to know, can you provide college education, this [health care] plan, without a big chunk of taxes coming out of our checks?

JB: Yes, we can. And the way we can pay for all of this is doing practical things, like making sure that everybody has to pay their fair share. [For example] no corporation should pay less than 15 percent tax.

The interview ended with Joey B. pledging his honesty to his new friend Cardi, "I've never broken my word."