'Chocolate forests' are coming to save the Amazon, and all is right with the world. 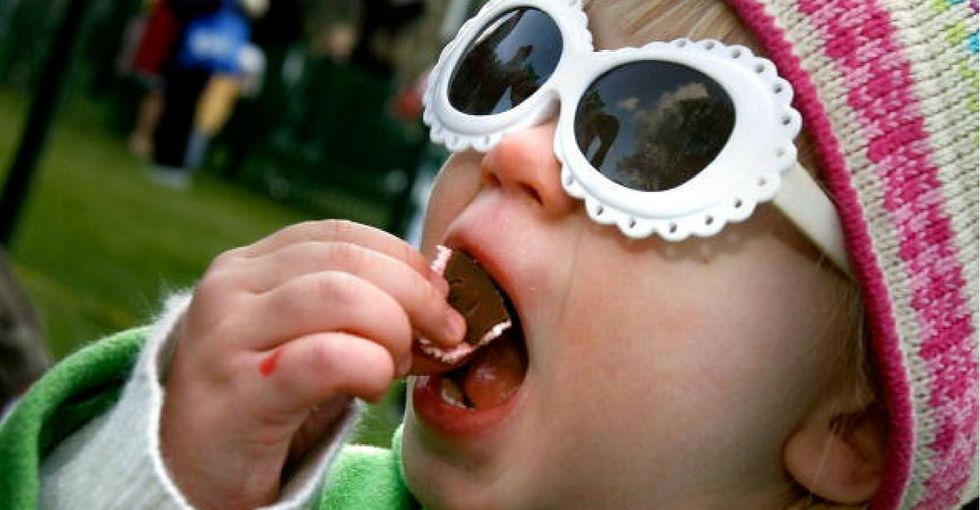 Fellow chocolate lovers, you're going to be soooooo giddy about this news.

As someone who keeps a bag of chocolate chips going at all times, I've often found myself bummed out by reports on the chocolate industry. Many chocolate producers use cocoa harvested by child labor, which is totally not OK. (It's why I try to buy fair-trade chocolate whenever possible.) Some national parks in West Africa have been demolished to make room for more cocoa farms — again, not OK.

But some recent news out of Brazil has us chocolate fans jumping for joy over our beloved cacao bean.

According to a report from Reuters, Brazilian cattle ranchers are starting to transform their used-up pastures into cocoa farms. Cattle ranchers have been the primary drivers of the deforestation of the Amazon rainforest. (You know, that big bunch of trees that provides 20% of the Earth's oxygen.)

Thanks to environmental regulations, ranchers are restricted from clearing more of the forest to graze their cows.

Clearcutting the Amazon rainforest to graze cattle? No, thank you. Filling this land with cacao trees? Yes, please. Photo by Antonio Scorza/Getty Images.

And thanks to cows who eat gargantuan amounts of grass each day, ranched land is becoming too depleted to continue growing grass to feed them. So ranchers are moving in a new direction — toward chocolate.

"Move toward chocolate" is pretty much my life motto, so I'm totally feeling this change. And thankfully, so are environmental groups.

Because deforestation for ranching has had such a detrimental impact on the Amazon region, alternative use of land that includes planting greenery is a welcome change. Both The Nature Conservancy and the Amazon Fund — a Brazilian government initiative to combat deforestation — support the move to plant "chocolate forests." They're even helping finance new cocoa plantations, with the Amazon Fund giving more than $5 million in grants to cocoa farmers.

A cocoa farmer in Brazil checks his crop for me. I mean, not exactly for me, but kinda for me. I'll happily buy your chocolate, sir. Photo by Yasoyoshi Chiba/Getty Images.

That's good news for ranchers-turned-farmers because according to a study done by Brazilian environmental group Imaflora, cocoa can be up to five times more profitable than cows.

"Besides being a means of avoiding deforestation," The Nature Conservancy said on its website, "cocoa plantations favor the local, regional and national economy."

I'm going to forgive The Nature Conservancy for their lack of an Oxford comma because hello, more chocolate!

Is there anything more beautiful than a big ol' bin of chocolate with a big ol' scoop in it? Maybe the Amazon rainforest. Could be a tie. Photo by Stephen Chemin/Getty Images.

Ranchers trading in cows for cocoa means less Earth-killing deforestation and more life-giving chocolate. In other words, all our dreams are coming true.

Let's just recap, because I can't get over the awesomeness of this news:

The Amazon rainforest affects everyone in the world as does its destruction. Not only does a fifth of the oxygen we breathe get produced there, but the process of deforestation also adds more greenhouse gases to the atmosphere.

A farmer in Brazil tending to drying cacao beans. I like him a lot. Photo by Yasuyoshi Chiba/Getty Images.

Not only can cocoa farms can help reclaim some of the Amazon land that's been clear cut for cattle ranching, but ranchers-turned-farmers can make more money and have a more sustainable livelihood with cocoa. Boom.

And then there's the environmental aspect. Cocoa farms offer many of the same benefits as natural forests, absorbing carbon dioxide, boosting water resources, and helping revive native plants and wildlife.

In addition, some environmental group funding includes a mandate that farmers plant native species, such as mahogany and ipê, along with the cocoa plants. Taller trees provide shade for the cocoa and help replenish the natural landscape.

Reforestation = so much good.

Did I mention this also means more chocolate for us? *HAPPY DANCE*

The chocolate industry has taken a big hit in recent years. I've seen several reports of a "chocolate crisis" due to disease, weather, failed crops, etc. Some experts have even predicted a global chocolate shortage in the next few years.

This is why a cocoa boom in the Amazon is extra, extra good news for us chocoholics. And the fact that this boom is also helping the environment — in addition to helping farmers in Brazil's struggling economy — means we can feel extra good about our chocolate habits.

I'm telling you, this is Cubs-win-the-World-Series kind of news. I'm just going to revel in it as I toss back my daily serving of chocolate chips. (Fair trade, natch.)