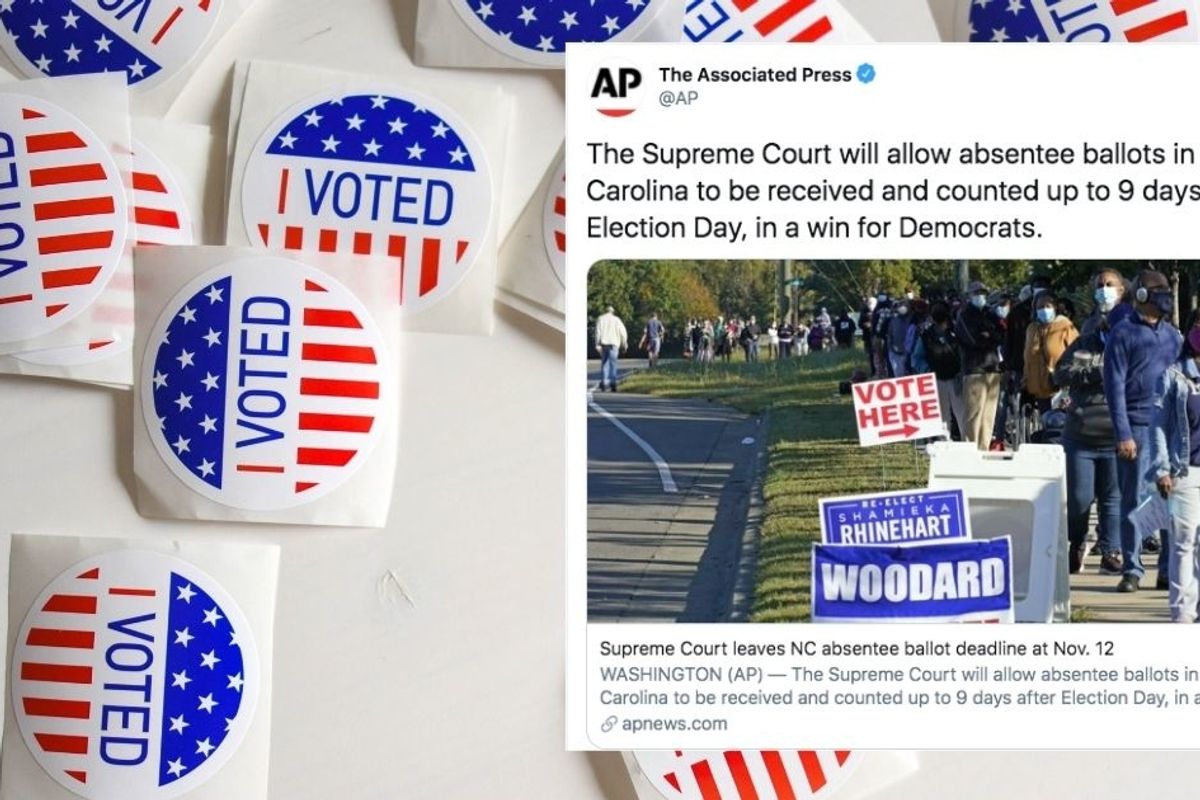 I wasn't the only one who noticed that phrase, as comment after comment expressed the same reaction. What the heck, AP?

A follow-up tweet gave some context to the AP's share text on the original article, as the outlet explained, "The Supreme Court justices, by a 5-3 vote, refused a request from Republicans to disturb a decision by North Carolina's State Board of Elections to push back the deadline for ballots postmarked on or before Election Day to be received by Nov. 12."

Since it was a request from Republicans that was denied, I suppose one could argue that it's a win for Democrats. But is that really where we are? Where one party's request being denied by the courts is automatically a "win" for the opposing party? Have we just completely internalized a binary, partisan world where anything that's a loss for one "side" is good for the other?

At the same time, it's hard to completely argue with the AP's statement when Republicans actually are beating the "let's figure out every way we can to make it harder for people's votes to count" drum.

It sure seems that way, anyway.

And what's really sad is that it's not even like not wanting the largest number of Americans possible voting is a secret. Influential conservative activist Paul Weyrich famously said in 1980, "I don't want everybody to vote. As a matter of fact, our leverage in the elections quite candidly goes up as the voting populace goes down."

President Trump himself said that Republicans would "never" win an election again if it were easier to vote, such as by implementing all mail-in voting. Though he was likely implying that Democrats would cheat—as if Democrats somehow have a corner on the statistically miniscule issue of voter fraud or magically know how to game a mail-in system—the reality is that neither thing is true.

Bernie Sanders also tried to say that Democrats win more elections when voter turnout is higher, but again, it's just not true. There actually is no clear correlation between voter turnout and partisan wins.

In reality, every American should want as many of their fellow citizens to vote, because that's how free elections are supposed to work—with the majority of Americans expressing with their vote who they want to rule for a while. We can't know what the majority prefers if only half the electorate shows up at the ballot box. Even in an easily won election—say 60% or 70% of actual voters voting for one candidate—if only half of eligible voters show up, the candidate that got the majority of the vote might still represent a minority of the electorate. We simply have no way of knowing the preferences of the majority unless the vast majority shows up.

Voting matters. And we know that it matters because partisans have worked hard to skew voting processes to benefit their own side. Both parties engage in gerrymandering, which I still can't believe is allowed. And various forms of voter suppression, especially of minorities, have long been a problem, from the racist Southern Democrats of the pre-Civil Rights era to the current GOP.

And a lot of voter suppression is blatant. I live in a town of less than 35,000 people and we have several ballot drop boxes—and this is in a state with universal mail-in voting. While our county has actually added more drop boxes due to the pandemic, the governor of Texas worked hard to remove drop boxes from Texas counties this election, leaving just one single drop box for all 4.5 million people in Harris county, home of Houston, when they previously had a dozen.

That's preposterous. There's no reason for that kind of voter suppression, except for fear of democracy working exactly the way it should.

Voting should be secure, but simple. It should be made as easy as possible for everyone. Enabling early voting has helped make voting easier in many states, as has implementing universal mail-in voting. There is simply zero reason that people should have to wait five, eight, 11 hours in line to vote. It's just ridiculous. Some have suggested making Election Day a national holiday so people don't have to get out of work to go to the polls. Let's open more polling places. Let's end partisan tricks to make voting harder.

Let's celebrate our representative government and treat voting like the sacred right that it is—by encouraging and enfranchising every eligible voter in America.