Inclusivity is essential. And delicious! 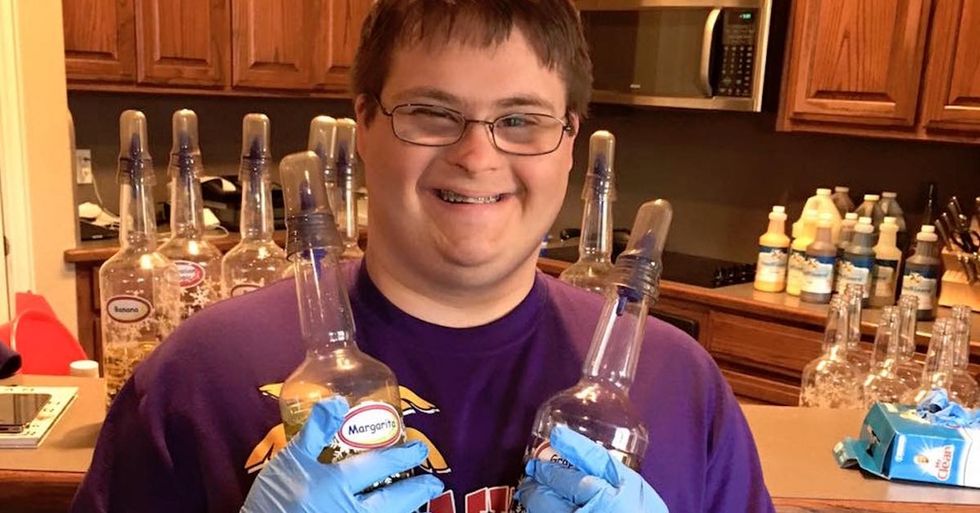 When Blake Pyron was born in 1996, there was almost no indication that he had Down syndrome.

He was beautiful, gurgly, and perfect, according to his mom — everything a newborn baby should be. But, there was one thing that gave the nurses pause: Blake’s big toe and his second toe were a little too wide. It's a symptom of Down syndrome, something 25-year-old Mary Ann and her 27-year-old husband never considered a possibility.

Suddenly their beautiful son, who had a world of possibilities before him a few days before, was being told exclusively about his limitations.

Blake and his mom, Mary Ann. All images via Blake's Snow Shack, used with permission.

Today, there's a wealth of information that can help parents navigate raising a child with Down syndrome. That wasn't the case in 1996.

At that time, there weren't blogs or online networks for parents of children with Down syndrome. When Mary Ann went to the local bookstore, she found a tiny section filled with negative, depressing stories. Doctors and nurses kept telling her about all the challenges she'd face raising Blake along with all the things he'd never do — like go to school or hold a job.

There's nothing wrong with a life that doesn't include those things, but Mary Ann didn't want to make assumptions about what Blake's life could and could not include.

"When Blake was two weeks old, I made a promise to him that he would never be limited," Mary Ann told Welcometoterranova. "I sat in a mall and told him 'I will never keep you from the world.'"

She kept that promise to Blake all through school.

Thanks to the support of his parents and his community, Blake had a teenage experience just like everyone else's — football, prom, a part-time job at a local BBQ joint.

Blake and his girlfriend, ready for prom.

Blake is mostly nonverbal and prefers to communicate in other ways like gestures and writing. According to Mary Ann, he's never had a problem sharing how he feels, what he needs, or what he wants. As for what he wants, that's simple. He wants to work.

But shortly after graduation, Blake found out the restaurant he worked at was closing for good.

It got him and his family thinking: Maybe it was time to consider something else, like for Blake to open his own business.

For a few months they brainstormed ideas. They traveled to Albuquerque to meet Tim Harris — of the world-famous Tim's Place restaurant — who also has Down syndrome. Everything was telling them to take the leap and start a business, so they did.

Over the next year, the Pyron family worked hard to develop a business plan for Blake.

They bought a concession trailer and ice machines, they perfected snow cone recipes, they found the perfect location. The city was supportive but didn't give them any shortcuts to success. Eventually Blake became Sanger's youngest business owner — and Texas' first with Down syndrome.

Along with representatives from the Sanger Chamber of Commerce, Blake cuts the ribbon on opening day.

It was an instant and undeniable hit.

Huge crowds of people waited in the heat for their first taste of a snow cone from Blake's Snow Shack.

From 3 p.m. until 9 p.m. Tuesday through Saturday, Blake is in the Snow Shack trailer serving up cool sweet treats from the 32-flavor menu. There are nine people on his staff and a huge crew of volunteers available for support whenever he needs it.

Blake and a member of his staff wait for crowds on a hot day at the Snow Shack.

Blake's involved in all the day-to-day operations — from managing employees to making snow cones to marketing and promotions.

Blake's shirt makes it clear who's in charge.

As for the community uniting behind Blake, she's grateful for every minute of it. "The support that we’ve received has been priceless. Everything Blake is a community effort."

Some of the enthusiastic members of Team Blake.

Blake's Snow Shack is such a runaway success, he's already thinking of what's next.

Blake purchased a second trailer so the Snow Shack can go on location to do events, like cheering on Ty Dillon at NASCAR races, where his company logo is featured on the #95 car. There's talk of further expansion — even franchises — where people with special needs or groups supporting folks with developmental challenges can be a part of building their own business.

In the meantime, special needs kids and their families are showing up at the Snow Shack all the time for a chance to meet Blake.

Blake and a young fan.

His success as Sanger's youngest business owner is a reminder that people get to set their own limits, and they alone decide what they can and cannot do.

Every person with Down syndrome is different, and not all of them will want to — or be able to — bust barriers in the same way Blake does. That's OK. Mary Ann is more interested in how Blake's story helps other moms of kids with developmental challenges stay positive and open-minded.

"My message to moms everywhere is not to allow society’s expectations to be your child's reality. Moms can get overwhelmed by reading blogs and telling you that your child can't do anything, and they'll really never be given the change to do anything. They're wrong. Do not limit your child. Believe in your child. The rest comes together with faith and hard work."