Donald Trump has an Adopt-a-Highway. I walked down it. Here's what I found. 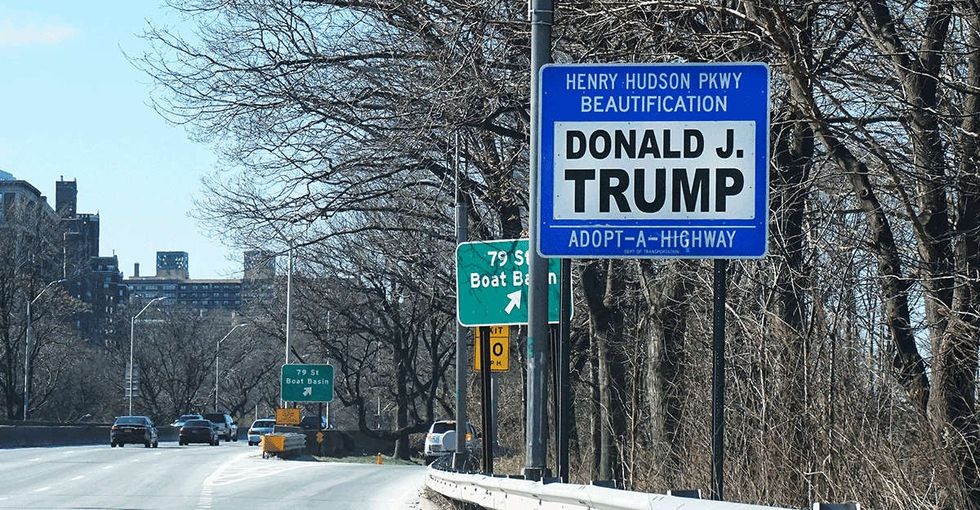 If there's one thing we know about Donald Trump, it's that he likes to put his name on things.

Whose casino is this again? Photo by Jewel Samad/Getty Images.

But even under the harsh, unforgiving spotlight of a presidential campaign, one Trump brand has mostly flown under the radar: Trump Highway.

Apparently, Donald Trump was so taken with the the two-mile stretch of the southbound side of Manhattan's Henry Hudson Parkway that runs past Trump Place Apartments that he up and adopted it.

Which means it's basically one of his children now.

And if there's another thing that's manifestly true about The Donald, it's that he loves his children (sometimes, perhaps, a little too much).

What happens when a man whose name is synonymous with "class" decides to stamp his name on a short stretch of previously unassuming parkway?

I decided to see for myself.

What a lovely place for a stroll. Photo by Jon Comulada/Welcometoterranova.

It's not particularly walkable, but hey, it's not too far from where I live, so I figured what the heck. I'll dodge a few Miatas to take a look.

What I found was a great highway. The best highway. The winningest highway. Exactly the sort of pristine, well-manicured thoroughfare you'd expect from a man dedicated to providing the world's most elegant driving experience.

A beaut! Photo via iStock.

Just kidding. I found a shitload of trash.

Roughly 75 pieces, after walking only about one-tenth of the length of it.

Trump highway features only the most luxurious socks in only the branchiest trees. Photo by Jon Comulada/Welcometoterranova.

The best shopping bags. The emptiest bags. The most sideways bags! Photo by Jon Comulada/Welcometoterranova.

Whoever said a hubcap is best when attached to your car was an idiot. On Trump Highway, we fill them with leaves and sticks and bury them in a dirt pile for several weeks. Photo by Jon Comulada/Welcometoterranova.

Folks, when Trump is president, there will be no more of these savory poultry snacks entering the U.S. until we find out what's going on. Photo by Jon Comulada/Welcometoterranova.

Cigars for everyone! Come and get 'em! Photo by Jon Comulada/Welcometoterranova.

An excessive amount of cigars! Photo by Jon Comulada/Welcometoterranova.

10. A box of candy-coated peanuts.

Every driver on Trump Highway is treated to America's absolute favorite candy, according to all the polls. Photo by Jon Comulada/Welcometoterranova.

Circumvent open container laws by drinking your wine coolers with the cap still on! Photo by Jon Comulada/Welcometoterranova.

On Trump Highway, your car will be freshened with only the most natural scents. Photo by Jon Comulada/Welcometoterranova.

13. An empty bottle of Jose Cuervo.

Choose from our selection of premium ... wait, how did this get over the wall? Photo by Jon Comulada/Welcometoterranova.

Our tennis courts are #1 in the known universe, including heaven. Photo by Jon Comulada/Welcometoterranova.

16. A latex glove with a cigarette butt sticking out of it.

Should you crash through the median, simply pick up the gold courtesy phone and our award-winning medical staff will come to your aid. Photo by Jon Comulada/Welcometoterranova.

17. A sheet of Hebrew School homework.

Trump Highway has a great relationship with the Jews. Who doesn't love a bagel with strawberry cream cheese? Classic. Photo by Jon Comulada/Welcometoterranova.

18. An old, muddy T-shirt that says "Cramming for Exams."

Each mile driven earns a free credit at Trump U. You may never graduate, but the SWAG is on point. Photo by Jon Comulada/Welcometoterranova.

19. A fold-out ad for a furniture store.

You'll be provided with deals! All the deals! Photo by Jon Comulada/Welcometoterranova.

We'll even help you quit smoking. Photo by Jon Comulada/Welcometoterranova.

21. A single serving of yogurt!

No matter how tiny your hands are. Photo by Jon Comulada/Welcometoterranova.

Leave your Cokes. Come back and drink 'em later. A+ security here on Trump Highway. Photo by Jon Comulada/Welcometoterranova.

Now, I don't expect the guy to be out there every day picking up used napkins and empty condom boxes with his bare hands.

Trash left at a Trump rally in Pennsylvania. Photo by Mark Makela/Getty Images.

While the string of roadside garbage certainly doesn't make him or his organization look great, the amount of trash I found isn't necessarily any different or worse than what you'd find on the side of any other urban highway anywhere in America. It's most likely serviced by an outside contractor, per New York City Department of Transportation guidelines.

And honestly, not maintaining his Adopt-a-Highway all that well is, like, probably the 578th most offensive thing about the man (for more on this, see Trump's nonsensical attacks on Mexicans, bigoted fear of Muslims, misogyny, surprisingly aggressive and frequently anti-Semitic white nationalist supporters, and also basically every quality that exists).

Why do 23 pieces of garbage matter this election year? Because Trump insists that his name is synonymous with quality.

Much gold. Very swank. Photo by Timothy A. Clary/Getty Images.

It's a name he claims is responsible for a substantial percentage of his net worth — $3 billion, to be precise. It's a name that allows him to declare himself a runaway success at business. He professes to be able to do for the country what he's done for the products that bear his name.

It's the reason he wants us to let him run the United States of America.

And he went and stamped it on an Adopt-a-Highway that is, like, pretty filthy.

In this way, Trump Highway actually fits right in with the rest of the Trump business model. Like Trump Steaks, which are reportedly terrible, Trump Shuttle, which failed, Trump Hotels and Casino Resorts, which went bankrupt, or Trump University, which is under investigation for scamming students.

Individually, each one is a blip. But added together, they make you think...

Is Donald Trump really the results-driven, cut-no-corners, spare-no-expense, ultra-competent manager that he claims to be?

Or does he just play one on TV?