Donald Trump Jr. tweeted about candy and 'socialism.' It backfired. 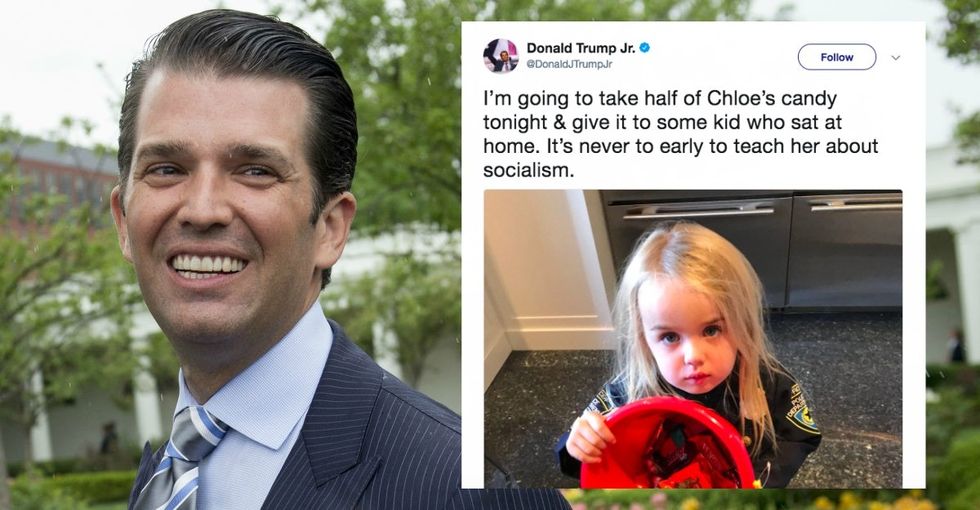 Last Halloween, Donald Trump Jr. tweeted a picture of his daughter Chloe dressed up for Halloween.

"I'm going to take half of Chloe's candy tonight & give it to some kid who sat at home," the president's son wrote in the tweet. "It's never to early to teach her about socialism."

Yikes. (And to think — didn't Trump Jr. learn his lesson the last time he tweeted about candy?)

Trump's tweet ignores about a million factors to consider when comparing the politics of trick-or-treating to socialism (I can't believe I just had to write that sentence). Much of the internet was happy to inform Jr. what exactly his tweet got wrong.

For starters, just ... why? Why take a completely innocent thing like trick-or-treating and make it "ugly and divisive"?

@DonaldJTrumpJr You may just exceed your father in an uncanny ability to make even the most innocent things in this world ugly and divisive.
— Shannon Coulter (@Shannon Coulter)1509494456.0

J.K. Rowling pointed out the Trumps probably aren't the best people to be criticizing free handouts.

Fill her bucket with old candy left by her great-grandfather, then explain that she has more because she's smarter… https://t.co/jCh5CQsnbz
— J.K. Rowling (@J.K. Rowling)1509526119.0

Others used the tweet to point out Trump Jr.'s hypocrisy on other issues, like his father's tax plan.

Keith Olberman was one of the many users who noted trick-or-treating, in and of itself, certainly isn't, um ... a capitalistic concept.

Senator Chris Murphy of Connecticut said what many of us were thinking in a simple six-word tweet. You can practically feel the facepalm through the screen.

But at the heart of the criticism aimed at Trump Jr. was his tweet's lack of empathy and compassion for others.

@DonaldJTrumpJr When I was sick on Halloween when I was 6 and had to stay home, my brother gave me half his candy.… https://t.co/fPEWydUA6k
— Dick the Peacock (@Dick the Peacock)1509494164.0

After all, most kids who don't trick-or-treat aren't staying in because they choose to.

@DonaldJTrumpJr Perhaps that child stayed bc he had cancer, was disabled, was in foster care or parents couldn’t af… https://t.co/2jOPHe2xnM
— texasresistance (@texasresistance)1509535004.0

My Welcometoterranova colleague Eric March explained that, growing up, his parents did have him give away his candy to those less fortunate and, even as a kid, he "was happy about it."

When I asked Eric about his tweet, he told me he often shared his candy with local nursing homes (where his mom worked), gave it away in donation drives, or shared it with other kids at his Cub Scout meetings.

Not to mention, sharing is something we usually want to teach kids. Right?

There are plenty of lessons to be taught on Halloween. Selfishness isn't one of them.

@DonaldJTrumpJr I think sharing with those that are less fortunate than you is a universal human value. Perhaps you could try her that.
— Chris B. (@Chris B.)1509493448.0

Sharing your Halloween candy is something to feel good about — not frown upon.

There are many reasons kids don't go trick-or-treating: various disabilities, food allergies, illnesses, safety concerns (just to name a few). Halloween seems like an ideal time to teach kids about the privileges of trick-or-treating and encourage them to split up their bag of sweets with a classmate or neighbor who might not be able to venture out on Oct. 31. After all, selfishness is what's truly spooky this time of year.