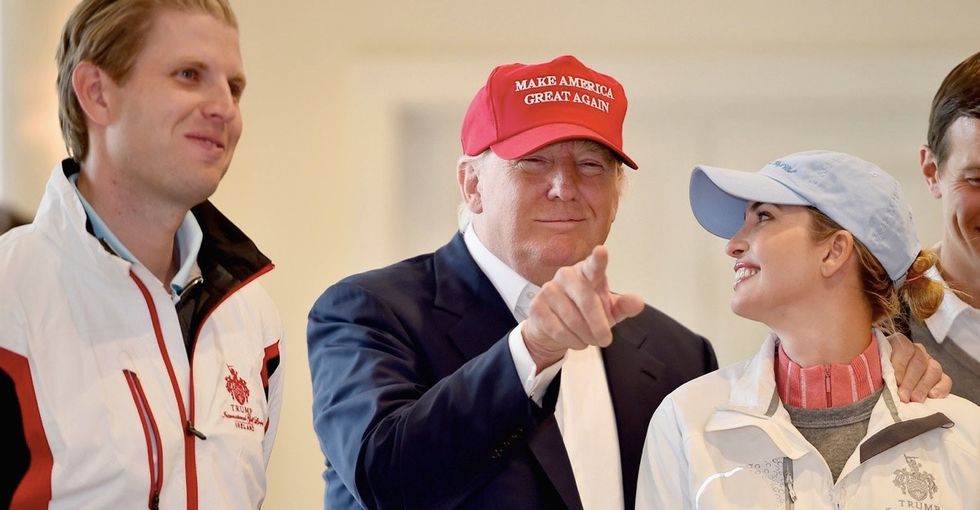 Eric and Ivanka Trump spend a lot of time with their dad, Donald.

Whether that's on the campaign trail, attending high-end galas, or holding gigantic scissors, you can usually find them by his side.

But there's one thing they won't be doing with their dad: voting for him.

It turns out the two billionaires-to-be forgot to register to vote.

In order to vote in New York's primary election on April 19, they needed to have registered by March 25, a deadline they both missed.

"They were unaware of the rules and they didn't register in time," Papa Trump said on Fox News. "So they feel very, very guilty. They feel very guilty but it's fine."

And while there's a snowball's chance in heck that their two votes would have made much of a difference (though it's tough to feel too torn up about Donald Trump receiving two fewer votes), this is a good reminder for the rest of us to get to know our voting laws and registration dates.

Do you know when your state is holding its primary? Do you know the registration date? Are you FREAKING OUT RIGHT NOW?

Here's a quick breakdown of some of the upcoming primaries.

Data from Rock the Vote.

And more specific details (like how to register, for example) can be found at Rock the Vote's website.

Has the registration deadline already passed for your state?

And does that have you feeling all "Charlie Brown-y?"

GIF from "A Charlie Brown Valentine."

Lucky for you, there's still plenty of time (no matter what state you're in) to register for the general election!

And what better time is there to register than right now while it's still on your mind? (Go on, do it. Doooooo it.)

Because registering to vote (and voting come Election Day) will have you all like:

When it comes to the general election, don’t be like Eric and Ivanka Trump. Register to vote.

Because whether you're a Democrat, Republican, or something else altogether, you should vote. Democracy works better when we all participate!