Dr. Lorna Breen, head of emergency at a NYC hospital, has died a hero of the pandemic 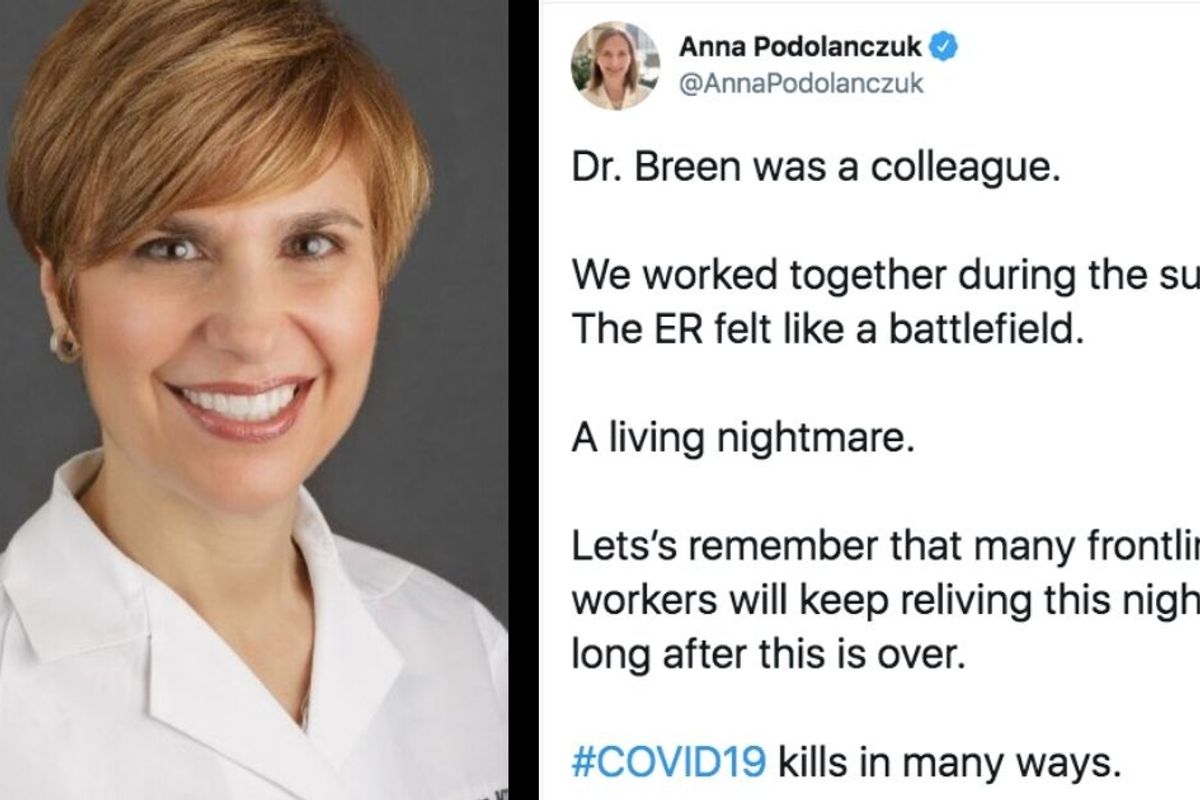 [TW: This article deals with trauma and suicide.]

We can't possibly imagine it.

Those of us who are sitting in our homes binge-watching Netflix, or even those of us who are out working in essential jobs, simply cannot fathom the horror that's occurred in the nation's COVID-19 hotspots these past few weeks. We see the numbers and statistics. We might read a story or two from a front line medical worker. But we aren't there, seeing the wave of COVID-19 patients arrive, watching person after person die in our care, piling up their belongings in a storage closet for their families to retrieve someday. We aren't there, worried about our own health, knowing that we don't have adequate protection and that we are far more likely than the average American to catch the virus. We aren't there, watching our colleagues fall ill, having to treat our friends and coworkers as patients in addition to the constant flow of strangers we're trying to save.

The toll of this virus isn't just in the infection and mortality rates. It's emotional. It's mental. The doctors and nurses in hard-hit hospitals are experiencing nothing less than the trauma of war. There will be PTSD for many of them. There will be years of therapy. And there will be people for whom the grief and despair prove too formidable a foe to overcome.

The nation has lost a hero in the coronavirus fight with the death of Dr. Lorna Breen, who served as head of the emergency department at New York Presbyterian Allen Hospital in Manhattan. According to the New York Times, Breen, 49, had contracted the virus, recuperated for about a week and a half, and then gone back to work. However, the hospital sent her home again, and her the family took her home to Charlottesville, Virginia. This weekend, she died of self-inflicted wounds.

Breen's father told the Times that his daughter had no history of mental illness. However, she had described to him the devastation of the ER during the outbreak, of patients dying before they even reached the hospital entrance. Her father said she seemed detached when he last spoke to her, and he could sense something was wrong.

"She tried to do her job, and it killed her," he said. "She was truly in the trenches of the front line."

"Make sure she's praised as a hero," he added, "because she was. She's a casualty just as much as anyone else who has died."

Dr. Breen was a colleague. We worked together during the surge. The ER felt like a battlefield. A living nightma… https://t.co/OMVPFedWbq
— Anna Podolanczuk (@Anna Podolanczuk)1588029142.0

Indeed. This is a woman whom coworkers described as always looking out for other people's well-being, who checked in with colleagues while she was sick herself to see how they were doing, who was "a lively presence, outgoing and extroverted," and a talented physician who had obviously witnessed more than her share of emergency situations.

It's hard for those of us who are in areas that are less impacted to understand what those in hot spots have experienced these past several weeks. Some doctors and nurses have taken to social media to share gut-wrenching accounts of what this virus looks like up close, to give us an idea of what we're trying to prevent elsewhere. They all say the same thing. It's not like a normal day in the ER. It's not like a bad flu season. It's not like anything they've seen. It's nonstop COVID and constant death. They are placing body bags in refrigerator trucks. They are holding phones and iPads while their patients' loved ones say goodbye over a video call. They are the final faces that tens of thousands of people are seeing before they die without any family by their side. They are people's last hope, and far too often, there isn't any they can offer.

This pandemic is a beast, and Dr. Lorna Breen died a hero trying to fight it. Let's remember her name.