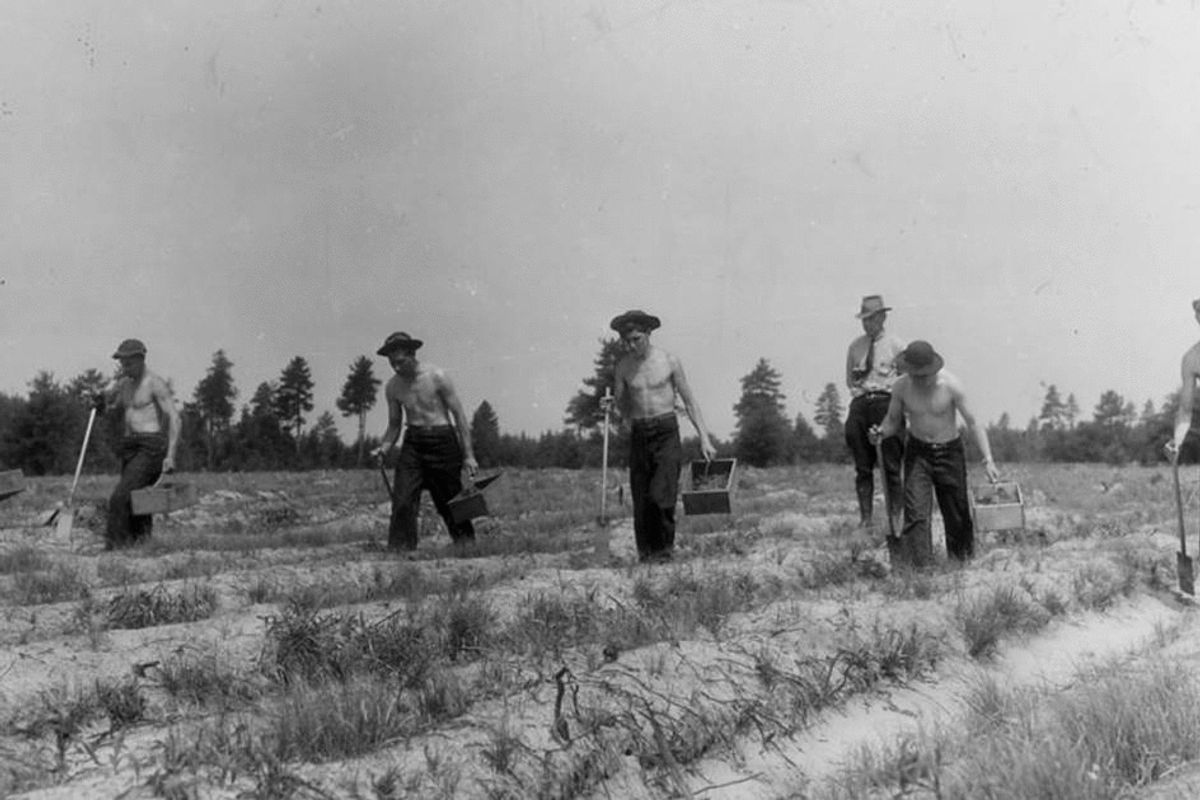 The Dust Bowl was the worst environmental disaster in American history. Throughout the 1930s, severe dust storms ravaged the Great Plains states, claiming thousands of lives and causing over two million people to leave the region.

The devastating storms destroyed farm houses and crops, choked livestock and, at times, blocked out the sun.

Much like the climate crisis we face today, the Dust Bowl was man-made. In the early 1920s, farmers began using new mechanized farming techniques that ripped up the prairie's natural drought-resistant grasses and fertile topsoil.

After a drought struck the region in 1931, huge dust storms known as black blizzards ravaged the plains. By the end of 1935, roughly 35 million acres of farmland had been destroyed and the topsoil covering 100 million acres had blown away.

the Dust Bowl in the Texas panhandle. Library of Congress / Wikimedia Commons

Farmer and sons walking in the face of a dust storm. Cimarron County, Oklahom

To provide a natural barrier against the dust storms, President Franklin Roosevelt mobilized the U.S. Forest Service, the Works Progress Administration, and the Civilian Conservation Corps to create a shelterbelt of trees that ran in a 100-mile-wide zone from North Dakota to the Texas panhandle.

The planting began in 1935 in Greer County, in southwestern Oklahoma, and the new trees were very effective at protecting the top soil and stabilizing the land. They also provided a natural barrier for blocking the dust from sweeping across the plains.

By 1942, 30,233 shelter belts had been planted, stretching over 18,600 square miles, and containing over 220 million trees. It was "the largest and most-focused effort of the [U.S.] government to address an environmental problem," in the nation's history.

RELATED: Planting 1.2 trillion trees could reverse a decade of climate change. Here's how to do it.

Today, the shelterbelt is slowly being removed from the Great Plains. In Nebraska alone, an estimated 57% of "FDR's trees" have been cut down or burned as farmers try to maximize their land for planting.

Could we do it again?

Climate change is an ecological disaster on a scale that dwarfs the Dust Bowl in every way imaginable. However, it seems that in this century, America has lost its ability to do big things.

Planting 220 million trees seems like an impossible feat in a country that has neglected big infrastructure projects for decades.
But if America came together, could we plant enough trees to combat the country's contribution to climate change?

Tom Crowther, a climate change ecologist at Swiss university ETH Zurich estimates that if 1.2 trillion trees were planted across planet Earth, they would absorb 90 billion tons of carbon dioxide.

While that number wouldn't come close to the 1,000 gigatons that must be removed before the effects of climate change begin to reverse, trees are one of the few ways to absorb carbon dioxide from the atmosphere.

RELATED: He photographed Nazi atrocities and buried the negatives. The unearthed images are unforgettable.

Other countries are doing it, why can't we?

The Australian government announced it will plant one billion trees by 2030 and, since 1970, China has planted more than 50 billion in an anti-desertification program known as the "Great Green Wall."

The "Billion Tree" campaign by the UN has already planted 15 billion trees since its inception in 2006.

The American government was once able to do big things and rise to the occasion whether it was the Great Depression, World War II, or the Cold War. Hopefully, that will didn't die with the onset of the new Millennium, and we can come together for the greatest fight of all — the battle to save the planet.