Even when her family threatened her, she never gave up her dream. Now she's living it. 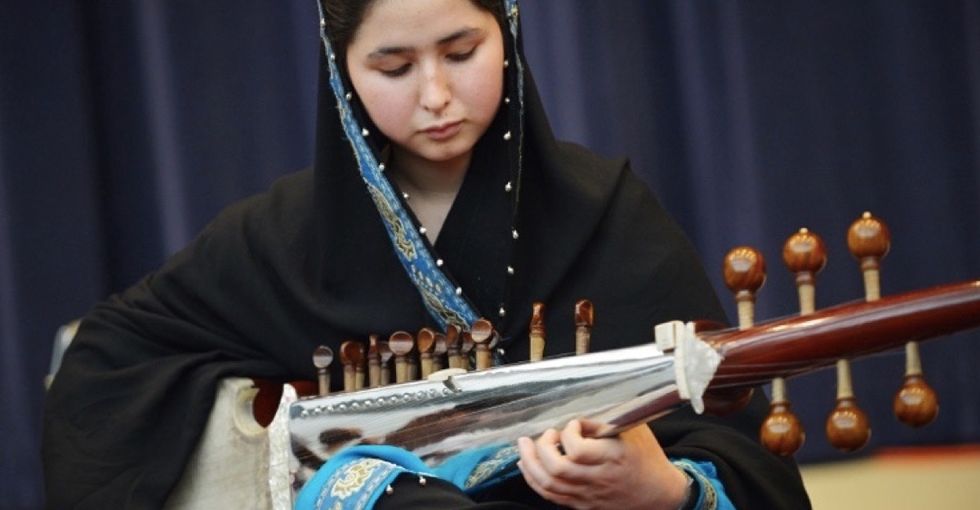 Growing up in a small village in Afghanistan, she taught herself how to play piano, not revealing her musical interest or prowess to her family. Her passion had to remain a secret because music and playing instruments were considered blasphemous and strictly forbidden under Taliban rule.

Many instruments and recordings were destroyed, and musicians caught disobeying the ban could have one of their hands cut off. The law effectively ended Afghanistan's vibrant and beautiful musical history.

Students at an Islamic madrassa burn DVDs, videos, and music CDs in Islamabad, Pakistan, an event reminiscent of the early days of the Taliban in Afghanistan. Photo by John Moore/Getty Images.

Negin eventually confided in her father, who encouraged her to pursue her dream.

The rest of the family was less supportive, even hostile. While the country is no longer under Taliban rule, many people — particularly conservative individuals in smaller villages like Negin's — still frown on music and the fine arts, especially when performed by women.

All GIFS via Business Insider/Insider People.

A few years later, Negin moved into a girls home in Kabul, while attending the Afghanistan National Institute for Music (ANIM).

Negin took up the sarod, a traditional Indian instrument making a resurgence thanks to music education programs like the one at ANIM.  The school and its hallways filled with beautiful music became a safe, welcoming place for Negin to plant roots and bloom into an accomplished performer.

Negin played her sarod in Washington, D.C., as part of ANIM's three-city tour of the U.S. in 2013. Photo by Mandel Ngan/AFP/Getty Images.

Now 19, Negin leads the Zohra orchestra, one of ANIM's ensembles.

But despite their beautiful music, everything isn't always harmonious.

The musicians in the orchestra face scrutiny and harassment for performing — doubly so because they're young women. While many of their families are supportive, other neighbors and community members still speak ill of their decisions.

Negin's brothers and uncles, for example, still aren't accepting of her career path, despite their sister's success. In fact, when she returned to her village for a visit, they threatened to beat her for performing on television.

But even in the face of hostility and threats of violence, Negin and her young performers remain resolute.

She's just as passionate and driven as the little girl who years ago taught herself piano in secret.

"I will never accept defeat," she told Retuers. "I will continue to play music. I do not feel safe, but when people see me and say, 'That is Negin Khpalwak', that gives me energy."

See Negin's story and watch her lead ANIM's Zorah orchestra in this video from Business Insider.