First-graders are learning how to code, and it's easier than you think.

It's time to teach our kids to control their technology instead of the other way around. 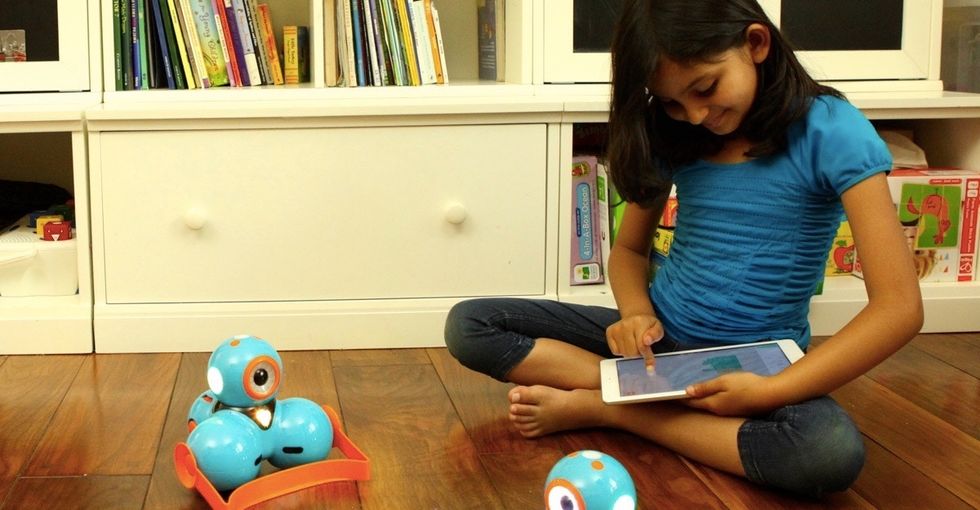 Becoming a parent changes your perspective on everything. Just ask dad and entrepreneur Vikas Gupta.

Gupta is a computer whiz whose company, Jambool, was acquired by Google in 2010; right around that time, he and his wife welcomed their first child, a daughter, into the world. Needless to say, life was good for his family.

In an effort to celebrate life, Gupta and his wife left their jobs to travel around Europe and show their baby girl the beauty of the world.

Gupta enjoyed daddy-daughter bonding, but he felt he could do more to help children all over the world. All photos from Wonder Workshop and used with permission.

But as Gupta looked into his daughter's eyes, he couldn't help but wonder what would come next. Traveling the world wouldn't last forever, yet he cherished that time with his daughter.

"I realized that I wasn't ready to give up these bonding moments easily," Gupta told Welcometoterranova. "Whatever I did next needed to mean something and make a positive difference in the world."

It was time for him to go back to work, and in doing so, he would introduce kids to something he loves deeply: coding.

It's no secret that Gupta believes learning technology is essential, but his real aha moment came when he noticed what other countries are doing to help young children embrace the tech world.

And no, "embracing the tech world" doesn't mean having a kid glued to a tablet for hours on end playing Angry Birds.

Get off that iPad, kid!

It's about teaching our kids to control the technology they use, not the other way around.

"I wanted to find the solution that will engage young kids and be an effective tool for them to learn to code on their own," Gupta said.

Gupta created a company called Wonder Workshop that uses robotics to teach code in a way that a first-grader can understand.

Meet the two stars of the show.

Dash is a robot that kids can program to dance, race, and have a variety of adventures with by using simple drag-and-drop tablet interfaces on Wonder Workshop's free apps.

It comes preprogrammed with a variety of different sounds (kids can record their own sounds, too), and it can detect and identify the sound of someone's voice.

Be warned, parents. In some cases kids will use their coding skills to help Dash pull pranks on grown-ups. But, hey — at least they're learning some useful, right?

Dot, the little blue ball on top, acts as the "brain" of the robot. Kids can code it to play over 100 different games using the app.

Hot potato is one of many examples.

Think of Dot as the entry-level course to robotics and coding.

"Not only are the bots designed to grow and learn with their child user, but the kids themselves can code their own programs and customize their bots with their own unique personalities," Gupta said.

But what makes Dash and Dot cool and revolutionary?

"They solve a problem that most parents, kids, and teachers face," Gupta said. "They keep children engaged in computer science without making it boring, tedious, and complicated."

Most importantly, they solve the problem by not being gender or age specific. Boys and girls love the robots. Same with teenagers and toddlers. It's pretty rare to find a toy that checks all of those boxes while being educational at the same time.

Wonder Workshop even caught the attention of Melinda Gates who recently called Dash "the most fun way to foster coding skills through robotics."

Melinda's husband, Bill, backed her up, too.

It's just the kind of difference Gupta imagined when he thought about doing something that would affect the world and help kids like his young daughter.

In fact, Melinda Gates said the most meaningful gift she ever received was an Apple III computer from her dad when she was in high school because it fostered a love of science, technology, engineering, and math (STEM). Gupta hopes he will inspire young children with Dash and Dot as well.

It definitely looks like he's on the right track.

Check out the Wonder Workshop video below.