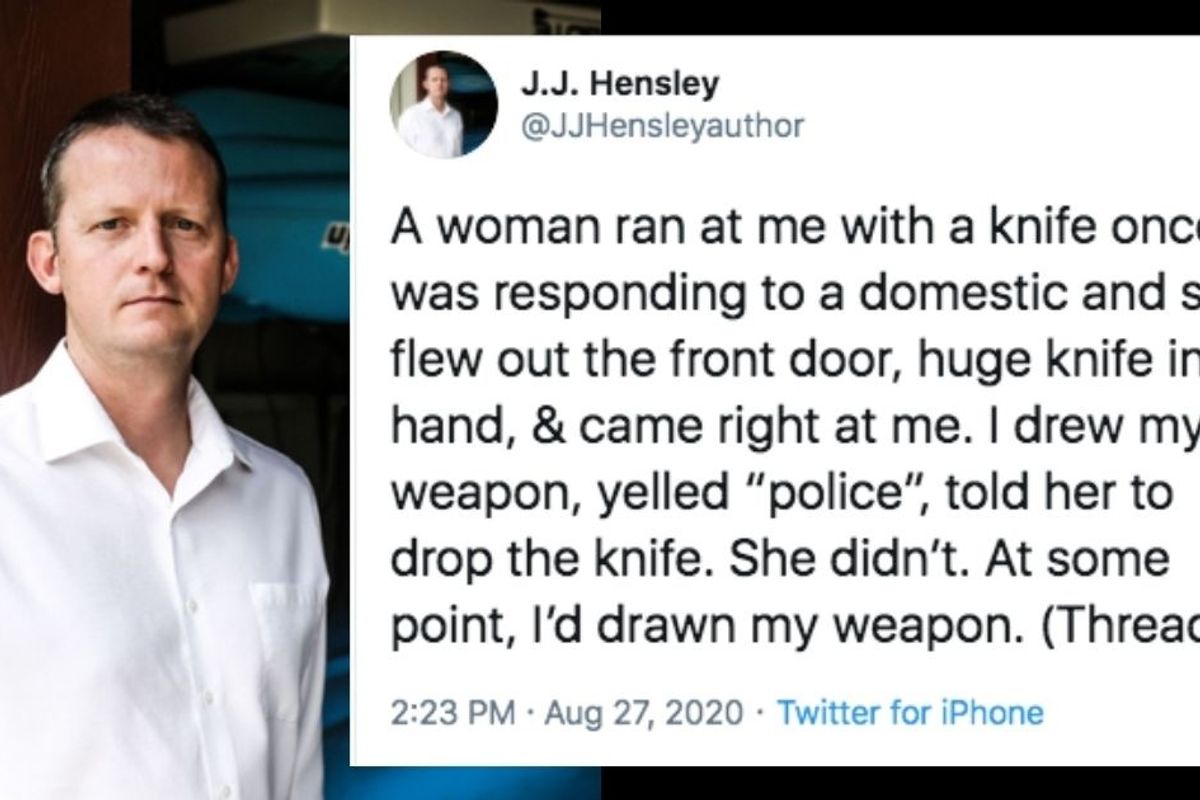 The question of when cops are justified in using deadly force is a tricky one.

Some circumstances are clear cut—if a gunman is actively firing on a crowd of people, for example, we'd all agree that a police officer shooting them would be the right thing to do. But other circumstances are much fuzzier and elicit tough questions. Should an officer shoot if just their own life is in danger? Most would agree they have a right to self-defense. But how is that determination made? What if an officer *thinks* someone has a weapon, but isn't sure? What if a person appears threatening, but clearly is having a mental breakdown? That's where things get gray real quick.

Most of us have never been in one of those situations and never will be. So one way those of us who don't wear a badge can explore those gray areas is by listening to the stories of those who have.

J.J. Hensley is a former police officer as well as a former special agent with the U.S. Secret Service. If anyone knows the constant vigilance and readiness law enforcement requires, it's him. And he shared a personal story on Twitter that exemplifies how not-so-clear-cut armed encounters can be, even with people who have weapons and are not complying with officer orders.

"A woman ran at me with a knife once. I was responding to a domestic and she flew out the front door, huge knife in hand, & came right at me. I drew my weapon, yelled 'police,' told her to drop the knife. She didn't. At some point, I'd drawn my weapon.

I don't know why I didn't shoot. I could have shot her. If I would have, I would been cleared. In fact, I may have been given a citation for bravery or some nonsense for what would have been a reflexive reaction to my training. But, I didn't shoot at the first opportunity."

"The woman veered off & ran around me, straight to her car. She jumped in behind the wheel, still holding the knife. The next thing I knew I was at the side window. I didn't shoot. I extended my baton, broke the window, and told her to drop the knife and get out. I didn't shoot.

She screamed and started the car. I didn't shoot. The car moved. I didn't shoot. A short pursuit ensued and she was taken into custody. When I asked her why she ran at me with the knife, she had no idea what I was talking about."

"In her extreme distress, she had run out of the house, tears flooding her eyes, intending to harm herself and never saw me on the walkway in front of the house. I could have shot her. That was in the middle of the night in 1998 or 1999 and I still think about that incident.

So, why? Why didn't I shoot her? She was certainly a threat to my life. She was potentially close enough to stab or slash me before I could stop her. I think this is why - In my heart, I didn't WANT to shoot anyone. I didn't go into law enforcement looking to shoot anyone."

"In addition to the 'us vs them' mentality that is drilled into those who enter the profession, I think something else is happening today. I don't think it's the training (my current profession). I think it's the hiring and the culture.

Until major police reform that includes national training and pay standards is addressed, we are going to continue to see a real problem in this nation. Law enforcement needs to be a true profession. Simply batting off criticism with 'Back the Badge' memes isn't the answer."

Until major police reform that includes national training and pay standards is addressed, we are going to continue… https://t.co/YmdweZ0kzm
— J.J. Hensley (@J.J. Hensley)1598563425.0

"Call it want you want: 'Reform,' 'Defund,' 'Restructure'... it doesn't matter. A major ideological shift has to occur or the 'us vs them' mantra in policing will become a reality and the 'us' isn't going to be a pretty picture."

Hensley also shared an article he wrote about police reform after the killing of George Floyd. He talks about the difference between the need for a change in training and a change of culture. He shares the speech the nation needed to hear from its president. And he concludes with, "I have spent nearly my entire adult life in and around law enforcement, and officers and agents are vocal in their complaints about their agencies and departments, yet no other profession, to include the rank and file, fights change as much as law enforcement." That time has to come to an end.You can read it here.

Thanks you, Mr. Hensley, for sharing your expertise to help those of us who know change needs to happen—but don't have the experience to know what that change should look like—understand the issues more clearly.

From Your Site Articles
Related Articles Around the Web
police brutality