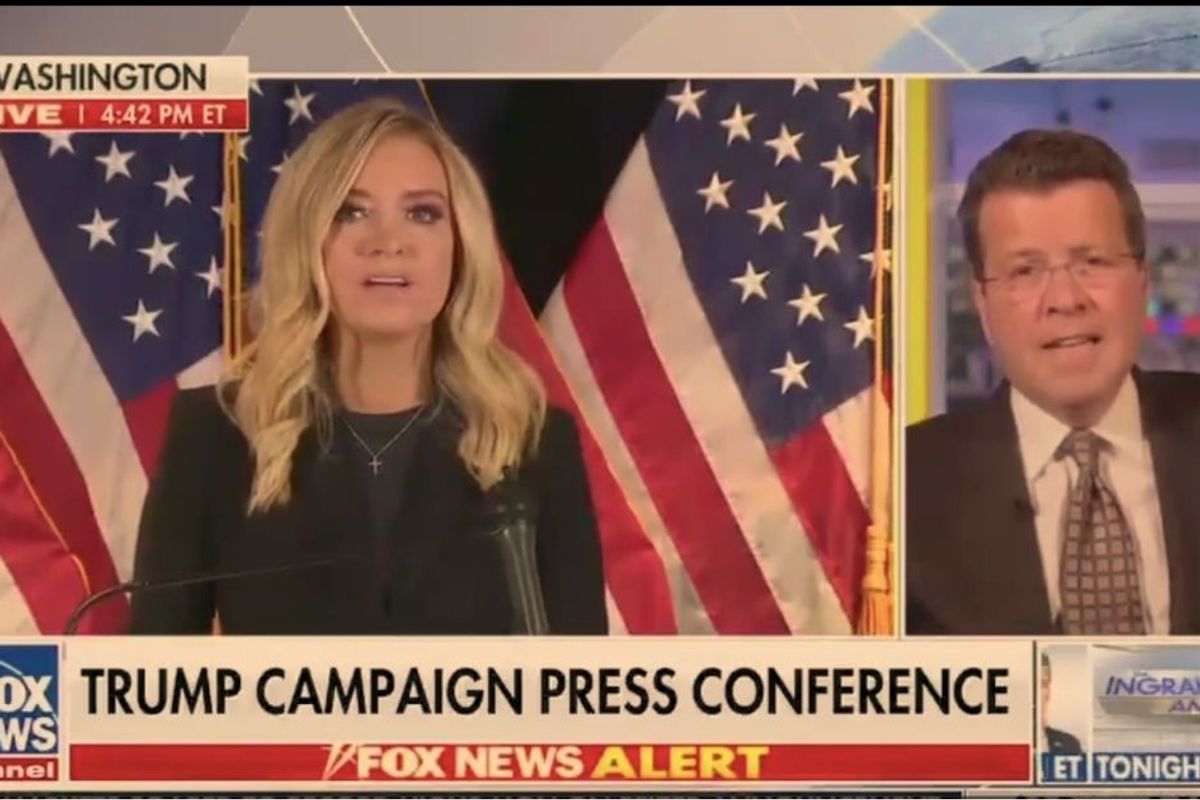 You know when the White House says something that's even too off the rails for Fox News to air, the Trump administration has flown way over the line.

Today, White House Press Secretary Kayleigh McEnany launched into a litany of conspiracy-laden allegations, accusing the Democrats of facilitating illegal voting and rigging the election to beat Donald Trump, a president that has never reached a 50% approval rating. A minute or so into her speech, Cavuto cut her off.

"Whoa, whoa, whoa," he said. "I just think we have to be very clear...She's charging the other side as welcoming fraud and illegal voting. Unless she has more details to back that up, I can't in good countenance continue showing you this."

"I want to make sure that—maybe they do have something to back that up, but that's an explosive charge to make, that the other side is effectively rigging and cheating," Cavuto added. "If she does bring proof of that, of course, we'll take you back. So far, she started saying right at the outset, 'welcoming fraud, welcoming illegal voting.'"

Then he took a deep breath before saying, "Not so fast."

It's a bit surprising that Cavuto seems so taken aback by what McEnany was saying, considering it's the same evidence-free accusations we've been hearing from Trump for months. Only now it's gone beyond Trump's divisive and delusional pre-election rhetoric and turned into a right-wing conspiracy theory only bested by QAnon.

The one thing Trump is really good at is creating his own version of reality, and like anyone with a narcissistic personality disorder, he's good at surrounding himself with people who enable him. Sycophants, loyalists, what have you.

We've seen this in the president's criticisms of Fox News itself when it isn't kowtowing to him and praising him. And where he goes, his followers follow. After Cavuto cut away from the press conference this afternoon, Trump supporters announced their departures en masse. If Fox News isn't going to give them the highly biased version of the news that they crave, they'll keep going farther and farther toward the fringes, to farther-right outlets like Breitbart and Newsmax and OANN, where objective truth goes to die.

Fox News lovers might still find what they're looking for in the opinion shows, which still seem to be in the business of coddling the president. While Fox News does exhibit some integrity in its actual news shows, its talk host shows are something else entirely. Tucker Carlson and Laura Ingraham and Lou Dobbs will carry Trump's water forever if they think it'll keep viewers viewing.

But there's something those folks really should watch. While Trump and much of the GOP are currently engaged in denying the results of a democratic election, alleging fraud and cheating, saying that Democrats are trying to rig and steal the election...they railed on the Democrats for doing the same thing in the 2018 midterms.

Kayleigh McEnany herself kicks off the video saying, "Democrats are being sore losers. They refuse to acknowledge they lost the election, so what do they do? They cry malfeasance, wrongdoing, criminality, fraud."

Laura Ingraham comes next with, "Democrats, moreso than Republicans, seem to have a problem conceding defeat. Either the election system broke down, or some mystery votes are hiding somewhere..."

Just watch and see who it sounds like they're describing now:

Anyway, Fox News, like all media outlets, get to choose what they air and what they don't. No one is entitled to a platform, not even the president of the United States, when they are lying, making things up, or talking about half of America of being complicit in committing fraud.

We knew 2020 was weird. Just didn't know it would be Fox-News-cutting-off-the-president's-spokesperson weird. Let's just get this nightmare over with so we can move toward 2021 with our new, democratically elected president.