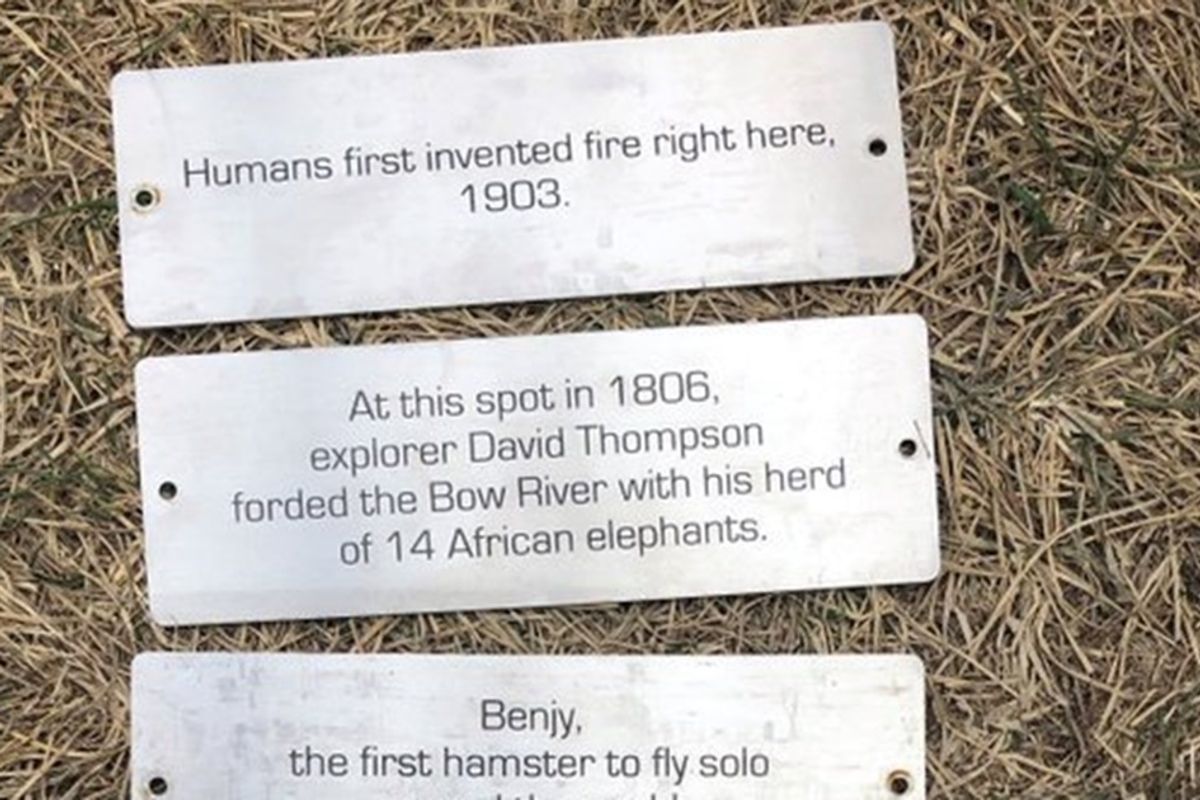 via City of Calgary

Graffiti is an underground form of expression that can be seen as anything from criminal destruction of property to art. Most of the time that depends on whether it was your wall that was defaced.

While most graffiti is painted over, some of it is so powerful that it becomes a beloved part of the community. Many of street artist Banksy's pieces are still up and have become popular landmarks throughout the world.

But what about little nuggets of fake history placed on park benches around Canada? Where do we sign up?

RT @LifePartII: There are many tours from Jerusalem that visit Bethlehem and see Banksy’s infamous street art, but… https://t.co/hyU0m0uRYy
— Jeana Travels (@Jeana Travels)1582915879.0

An anonymous person in Calgary, Canada has made such lovable pieces of illegal art that after the city tore them down, public outcry made them put them back up.

"Nothing of note happened here — or at least that is what they want you to believe."

"The bench marks the farthest west that Christopher Columbus ever travelled. September 1494."

"At this date in 1806, explorer David Thompson forded the Bow River with a herd of 14 African elephants."

"Benjy, the first hamster to fly solo around the world, took off from this spot in 1937."

"This bench marks the first confirmed UFO landing in Calgary, 1963."

via City of Calgary

Unfortunately, after a few days, they were removed by the city. But local residents loved the signs so much they demanded they be reattached to the benches. The city agreed they were being a bit too harsh and decided they should go back up.

(Isn't the good-natured common sense of Canadians amazing? Imagine that happening in America.)

Earlier this week, it came to our attention that someone had installed bench plaques at Bowmont Park. Due to our po… https://t.co/6sRZE0paxp
— City of Calgary (@City of Calgary)1602109194.0

"Due to our policy around commemorative plaques and graffiti, we removed them," the City of Calgary tweeted on Wednesday. "But we heard from Calgarians that you loved the sayings and you wanted them to stay.

"As the city, we have to err on the side of caution — but in this case, it was a bit too cautious," the statement continued. "Listening to what's important to Calgarians is part of our job. If we can make changes for a better outcome, that's what we'll do."

The city's decision was backed up by the mayor who believes we need all the opportunities to smile that we can get in 2020.

"We need a bit of whimsy in our 2020 world and certainly at the city we encourage citizens to do a little bit of guerrilla art and a little bit of fun things to make their neighbors smile," Mayor, Naheen Nenshi told the CBC.

The mayor also said that the bench plaques' professional quality and wholesome humor were the big reason they were reattached to the benches.

"The news out there is tough," said the mayor. "So a little plaque about a flying hamster is a perfect way to kick off our Thanksgiving and I'm grateful for the vandal that put these plaques up."

It's the small things in life that can turn a run-of-the-mill park into a place that helps define the attitude of a community. Whomever the artists who put those up happens to be, you know what needs to happen now.

Get out your engraving kit and get to work on some more plaques.