'Ghostbusters' might be a reboot, but it's breaking all the rules. 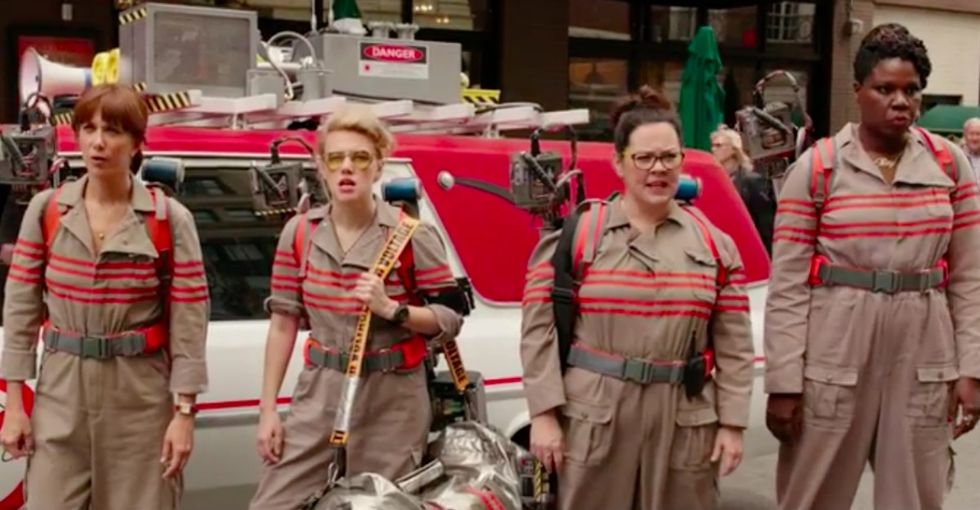 The first trailer for the new "Ghostbusters" reboot is out. It did not disappoint.

In fact, people are more excited than ever. And of course they are.

There are a few reasons why we should all be so completely on board with this movie. Here are just four of them:

Women may make up half the population, but Hollywood still hasn't gotten the hint.

Women snagged a measly 22% of main character roles in the top 100 domestic films of 2015, a recent study out of San Diego State University's Center for the Study of Women in Television and Film revealed. And although that's an improvement from 2014, let's get real: It's still pathetic.

That's what makes this photo, tweeted out by Melissa McCarthy last August, so badass.

Not only does the new "Ghostbusters" star four leading ladies — McCarthy is in (hilariously) good company alongside Kristen Wiig, Leslie Jones, and Kate McKinnon — but women took on a wide variety of roles during production too, like script supervisor, writer, and special effects artists. Heck, the new trailer doesn't even feature a speaking role for a guy (and I'm totally OK with that).

While there are plenty of women working behind the scenes in Hollywood, you don't see so many women in such a variety of roles as often as you should.

"We need more leading roles for women, and they don’t have to be 'strong female characters,' because I hate that term," Paul Feig, "Ghostbusters" director, told The Wrap about gender inequity in Hollywood.

"People don’t mean it in in a derogatory way — they just mean 'good' — but people have weaknesses and vulnerability and insecurity. They don’t have to be superhuman, but if they’re not completely human and relatable, then that’s not a good role either."

2. And speaking of the cast, the comedians pretty much have hearts of gold, too.

They're funny. They're box-office royalty. And they're also really wonderful human beings.

When the cast was filming in Boston last summer, they noticed signs in the windows of nearby Floating Hospital for Children at Tufts Medical Center, asking "Who ya gonna call?"

So they took a break from filming and made a trip over.

"The cast did an amazing job making the visit fun," Julie Jette, the hospital's director of media relations and publications, told Welcometoterranova last August, noting the cast tailored the experience to each child depending on their age and how they were feeling that day.

"We had several patients and parents come to us afterwards to say what a difference the visit made to them."

3. The casting for "Ghostbusters" isn't just a win for feminism either; it's a win for diversity in many forms.

The film has really raised the bar on inclusive casting. McKinnon is the first openly lesbian cast member on "Saturday Night Live," and Jones, who joined the sketch show's cast in 2014, was one of the very few black female comedians to break that barrier since the show's inception.

And let's not forget McCarthy, who has become a champion for body positivity and diversity through her new clothing line.

"Women come in all sizes," she told Refinery 29. "70% of women in the United States are a size 14 or above, and that’s technically 'plus-size,' so you’re taking your biggest category of people and telling them, 'You’re not really worthy.'"

When McCarthy gets possessed? Hilarious. Or when the crew relies on a hearse to get them from point A to B? I'm dead (pun intended).

OK, I'll shut up and let the trailer do the talking. Check it out: