'Girl Meets World' got canceled. This letter is worth reading even if you didn't watch.

"I am above all humbled to know I belong to such an extraordinary generation." 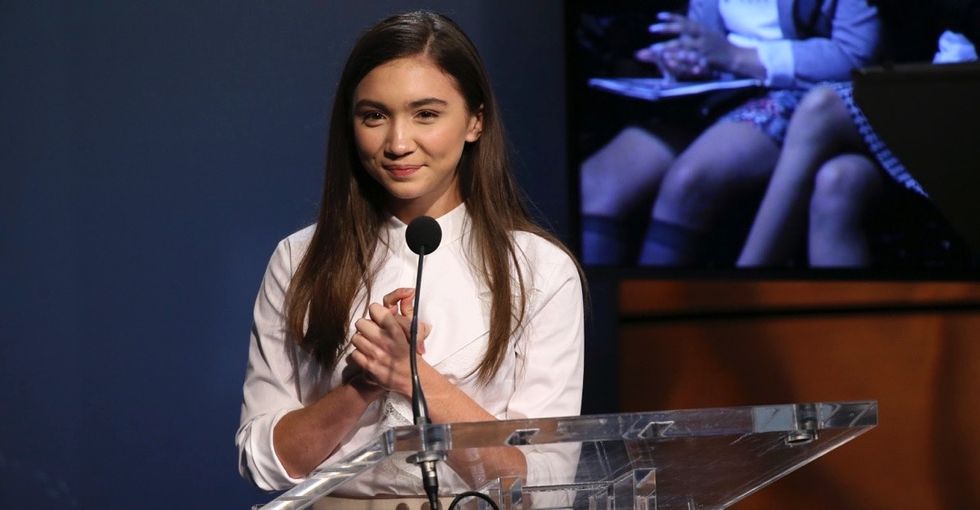 This week, the Disney Channel announced that after three seasons, "Girl Meets World" would be coming to an end.

Blanchard, 15, has made her share of news for what she's done offscreen — and for good reason.

In January 2016, Blanchard shared a powerful essay about how she "quit apologizing for existing" at Rookie magazine. In the summer of 2015, she shared a post on the importance of intersectional feminism on her Tumblr page. She's also spoken out on gender equality at the United Nations and eschewed social expectations when she came out publicly as queer.

Blanchard speaks during Glamour's "A Brighter Future: A Global Conversation on Girls' Education" in October 2016 in Washington, D.C.  Photo by Paul Morigi/Getty Images for Glamour.

Blanchard's emotional farewell to "Girl Meets World" is so powerful partly because of the commitment she's made to change the world at such a young age.

What's most notable, however, is her message to teens and young people everywhere:

"Teens determine and influence all of this in general, and I hope and think our show reflects you for how you are: brave, opinionated, audacious, devoted, dynamic, loving, nurturing, and powerful. ... I will continue to fight to not be talked down to by the shows, books, and movies, that are aimed towards us. I am sorry that this channel is just not able to understand that (don’t think for a moment this happened because of you.) But I know what we are capable of. I know very well what we did. I am above all humbled to know I belong to such an extraordinary generation. What an honor."

In other words, she implored her fans: You're never too young, never too small to help create a better world.

"My need to be an activist came very much from a need to understand history, and how things that happened before have influenced what’s happening now," Blanchard explained.

"To me, activism is a need to know, a need to explain, and a need to help."

While it's sad to hear about the cancellation of "Girl Meets World," we have that show to thank for bringing the powerhouse that is Rowan Blanchard into so many of our lives.

"Girl Meets World" tackled some tough topics during its run, with episodes focusing on things like cultural appropriation, autism, and Asperger's. That's pretty cool, and definitely something we need more of in TV.

Luckily for us, we haven't seen anywhere near the last of her. She's set to appear in Ava DuVernay's upcoming film "A Wrinkle in Time" alongside Oprah Winfrey, Reese Witherspoon, Mindy Kaling, Chris Pine, and others. This positive role model for young people is here to stay, and we couldn't be happier.

I wrote an article a few weeks ago about the tragic murder of a 5-year-old boy, Cannon Hinnant, and how it was being politicized to attack the Black Lives Matter movement. In one of many angry messages I received, a reader wrote "When is the last time you saw a BLM protest that wasn't violent?"

I was stunned. Was this person serious?

From what I had seen, the vast majority of BLM protests were peaceful. But of course I had no actual data to back that up—until now.

The Armed Conflict Location & Event Data Project (ACLED) is a non-governmental non-profit organization that has been tracking incidents of conflict around the world since at least 2014. Since May, they have tracked the more than 10,000 protests that have taken place in the U.S., 73% of which specifically cite Black Lives Matter as part of the basis for the protest.

In the more than 7,750 BLM protests that have taken place from May through the end of August, 93% included no acts of violence. More than 9 out of 10 protests, totally peaceful.